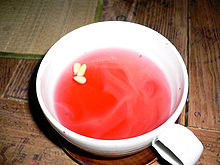 A mug of omija cha, a Korean herbal tea made from the berries of Schisandra chinensis.

Korean tea refers to various types of tisane that can be served hot or cold. Not necessarily related to "common" tea, they are made from diverse substances including fruits, leaves, roots, and grains used in traditional Korean medicine.

In Gakjeochong, a Goguryeo tomb shows that a knight drinks a cup of tea together with two ladies in the interior in the 5-6th century

The first historical record documenting the offering of tea to an ancestral god describes a rite in the year 661 in which a tea offering was made to the spirit of King Suro, the founder of the Geumgwan Gaya Kingdom (42-562). Records from the Goryeo Dynasty (918-1392) show that tea offerings were made in Buddhist temples to the spirits of revered monks.

During the Joseon Dynasty (1392-1910), the royal Yi family and the aristocracy used tea for simple rites, the "Day Tea Rite" was a common daytime ceremony, whereas the "Special Tea Rite" was reserved for specific occasions. These terms are not found in other countries.

Toward the end of the Joseon Dynasty, commoners joined the trend and used tea for ancestral rites, following the Chinese example based on Zhu Xi's text Formalities of Family.

Insam cha (인삼차, 人蔘茶) is a tea made from ginseng, which can be an undried ginseng (수삼, 水蔘), a dried ginseng (건삼, 乾蔘) or a red steamed ginseng (홍삼, 紅蔘). The sliced or whole ginseng is gently boiled for a few hours in water, and then honey or sugar is added for taste. Usually, water 500 mℓ and ginseng 50 g is usual preparation for Insam Cha. Sometimes, jujube can be added when boiled.

Efficacy: Insam cha is good for increasing energy, especially for someone who catches colds frequently in winter. It also has a remedial effect on stomachaches due to low body temperature. But, this tea should not be consumed by someone who has a high body temperature or high blood pressure.

Efficacy: Korean angelica is often called ginseng for woman. Thus, it is good for (white) leucorrhoea and postpartum care. If consumed for a long time, it can remedy cold fingers or toes. But, it should not be used for someone who has diarrhea. 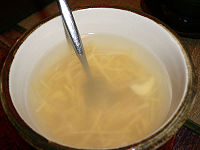 Made from grains and seeds