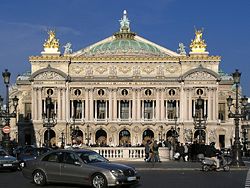 The Palais Garnier in winter. 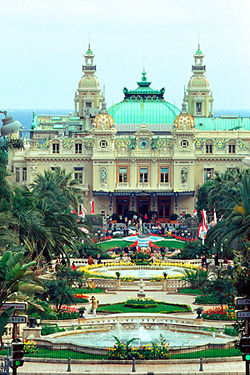 Charles Garnier (pronounced: [ʃaʁl gaʁnje]) (6 November 1825 – 3 August 1898) was a French architect, perhaps best known as the architect of the Palais Garnier and the Opéra de Monte-Carlo.

Charles Garnier was born Jean-Louis Charles Garnier on 6 November 1825, in Paris, France, on the Rue Mouffetard, which is in the present day 5th arrondissement. His father was originally from Sarthe, and had worked as a blacksmith, wheelwright, and coachbuilder before settling down in Paris to work in a horse-drawn carriage rental business. He married Felicia Colle, daughter of a captain in the French Army.

Later in life, Garnier would all but ignore the fact that he was born of humble origins, preferring to claim Sartre as his birthplace.

Garnier became an apprentice of Louis-Hippolyte Lebas, and after that a full-time student of the École royale des Beaux-Arts de Paris, beginning during 1842. He obtained the Premier Grand Prix de Rome in 1848, at age twenty-three. The subject of his final examination was entitled:"Un conservatoire des arts et métiers, avec galerie d'expositions pour les produits de l'industrie". He became a pensioner of the Académie de France à Rome from 17 January to 31 December 1849. He traveled through Greece which provided him the subject of his fourth year submission, presented at the Paris Salon in 1853. He visited Greece with Edmond About and Constantinople with Théophile Gautier. He worked on the Temple of Aphaea in Aegina where he insisted on polychromy. He was named, in 1874, member of the Institut de France, in the architecture section of the Académie des Beaux-Arts.

In 1860, the Second Empire of Emperor Napoleon III began a competition, seeking an architect to design the plans for the new, state-funded opera house. The current opera house, located at the Place de l'Opera, had stood since before the Revolution, and was badly in need of repair.

Applicants were given a month to submit entries, Garnier being one of them. His design was selected from among 171 other entries, and soon the thirty-five-year-old and relatively unknown man began work on the building which eventually would be named for him, the Palais Garnier Opera House. His design was considered highly original,[clarification needed] though most had difficulty in deciding exactly what style he was trying to portray. When asked by Empress Eugenie in what style the building was to be done, he is said to have replied, "In the Napoleon III, madame."

Construction began in the summer of 1861, though setbacks would delay it for another fourteen years. During the first week of excavation, an underground stream was discovered, rendering the ground too unstable for a foundation. It required eight months for the water to be pumped out, though enough was left in the area which eventually became the fifth cellar for operating the hydraulic stage machinery above. Garnier's double-walled and bitumen-sealed cement and concrete foundation proved strong enough to withstand any possible leakages, and construction continued.

The defeat of the French army in Sedan by the Prussians in 1870 resulted in the end of the Second Empire. During the Siege of Paris and the Paris Commune in 1871, the unfinished Opera was used as a warehouse for goods, as well as a military prison.

The opera was finally inaugurated on February 5, 1875. Many of the most prestigious monarchs of Europe attended the opening ceremony, including the President of France's new Republic, Marshal McMahon, the Lord Mayor of London, and King Alfonso XII of Spain.

The people who entered the massive building, spanning nearly 119,000 square feet (11,100 m2), were generally awed by its immense size and extensive ornamentation. Claude Debussy described it as resembling a railway station on the outside, and that the interior could easily be mistaken for a Turkish bath.

Garnier's works represent a Neo-Baroque-inspired style, popular during the Beaux-Arts period in France. He was influenced by the Italianate styles of Renaissance artisans such as Palladio, Sansovino, and Michelangelo, perhaps[citation needed] the result of his many visits to Greece and Rome during his lifetime. He was also a pioneer of architectural beauty as well as function; his opera was built on a framework of metal girders, unprecedented at the time. Aside from being fireproof, steel and iron was much stronger than wood, allowing it to successfully withstand the countless heavy tons of marble and other materials heaped upon it without breaking.

After completing his Opera house, Garnier retired to Italy, more specifically the city of Bordighera, on the Mediterranian coast where he built the Villa Garnier - his own private residence, in 1871. He contributed various private and public buildings to this town until his death at age 72 in August 1898. His other architectural contributions in France include the Nice Astronomical Observatory, the Marigny Theatre, as well as the opera and the Grand Hôtel de Paris in Monte Carlo in Monaco.

He was interred in the Montparnasse cemetery in Paris.