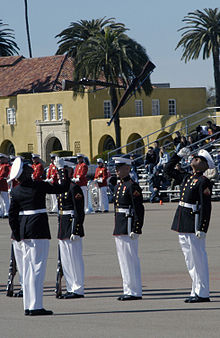 A drill team can be one of four different entities:

A Military Drill Team is a marching unit that performs routines based on military drill. These teams often perfect their proficiency and then choose to compete against other programs. These competitions are generally called "Drill Meets", and are held all across the world. The top American bladed (bayonet-only) independent drill meet is Pro America [1] and the top American independent armed drill meet is the Isis World Drill Championships [2] for post high school professional exhibition drillers in the nation. There is also the National High School Drill Team Championships [3] held in Daytona Beach, Florida for high school students where schools from across the US descend on Daytona Beach and the Ocean Center for a wonderful weekend of competition and camaraderie. Also see high school "military" drill teams in high school. Washington, Idaho, California.

The Norwegian military consist of only one single drill team, consisting of a band and a drill platoon. The team is one of five infantry companies that are assigned the mission to protect His Majesty the King of Norway aswell as the castle, his family and are also used to represent the norwegian armed forces at state-related matters such as state-visits, cemeronies, national festivities and were also prominent in the winter world cup 2010 as guards. These five companies make up His Majesty The King's Guard (Hans Majestet Kongens Garde) batallion, and is a part of the Norwegian army.

The band is hand picked through interviewes and playing tests prior to the draft date. The band consists of signal horns, a drumline, a pit and the main band. Most of the members year goes to practising and basic military training as the year is a part of their military service. The band is probably the only troop that almost never have "green" duty (as in field duty). Also, the band never stand guard at the castle nor the other guarding posts around Oslo (the capital), neither does the drill platoon.

The drill platoon consists of 30-40, first-year servicing soldiers. These are all hand picked through a rigerous selection progress that usually lasts from start of october till christmas. The soldiers go through much more military training than the band does and have to prove themselves worthy a spot on the drill team, as these soldiers will be representing the state internationally. Everything from the bed, room, facilities, closets, uniforms and physique needs to be at excellent standards 24/7. These men strive for perfection in all that they do and are often seen running around the various woods nearby the base aswell as working out at the gym. Their uniforms are spotless and wrinkleless, in addition their boots are so well polished that you can literally reflect yourself in them. As opposed to what one might think, these soldiers draft year have been compared to as even harder than what the first-year service in the special forces is. Though most likely not as hard physically, the mentality and the pressure in being the best of the best puts these soldiers under a tremendous amount of pressure every hour of every day, every day of the year. Their rigerous training results in being one of the best drill teams in the world.

The band and drill platoon (3rd company) is the only drill team that have been invited to the legendary Royal Edinburgh Military Tattoo seven times.

A Drill Meet is a competition for Military-style Drill Teams. The US military’s Honor Guard units have drill teams; however they do not compete against each other in a drill meet such as this. The only exception to this is Pro America [4] where individuals compete, but not the full drill teams. What is common across the US is high school JROTC and college ROTC teams competing against each other.

Each meet has different phases:

Many drill meets differ regarding what events are offered and what divisions of competition are presented. Drill meets generally include both an armed and unarmed divisions. Events offered generally include several different phases: Inspection, Color Guard Regulation Drill and, in addition, (drill based on a service's manual) and Exhibition Drill in which they march intricate maneuvers along with manipulating equipment including rifles, sometimes with fixed bayonets.

Each of the above phases can be marched by an armed (with a military sword, saber, or rifle) or unarmed team. NOTE: Many drill meets allow the use of a sword in the unarmed division, but never a rifle of any kind. All drill teams can march a guidon (United States).

School drill teams were started in 1928 by Gussie Nell Davis. She created the first drill team, then called a pep squad, at Greenville High School in Greenville, Texas. They were called the "Flaming Flashes" and they performed at every halftime show. After creating the Flashes, Davis was called to Kilgore College to form a college drill team. She created the world famous "Kilgore Rangerettes" to perform at halftime at the college. The Flaming Flashes and the Rangerettes now consist of a line of performers with the officers in front of the girls leading them at every game. The second college drill team to be created in Texas was the Tyler Junior College Apache Belles in 1947. Ever since then there has been a fierce rivalry between the Apache Belles and the Rangerettes. Most high schools in Texas are either an Apache Belle Style team or a Rangerette style team. The only four year university in Texas to offer a drill team is Texas State University with the Texas State Strutters.

In Washington state, the phrase "drill team" usually refers to high school performance/spirit teams that compete in the "Drill" and/or "Military" category at local, regional and statewide "Dance/Drill" competitions. Drill routines (sometimes referred to as "drills") typically entail (indeed some argue should entail):

The WIAA Dance/Drill competition is the annual Championship event for qualified dance and drill teams held annually in the last weekend of March.

A Washington drill team member, or "driller", is not a dancer, but a dancer can be a driller. Since the foci of Drill are presentation and spatial precision, drillers do not necessarily need attributes typically ascribed to dancers, such as a high level of flexibility (although this is a large portion of what many teams exhibit in their rouitines and part of their score) or an aptitude for expressing emotions with the body. This generally allows for larger team sizes, with most teams having about 20 or more members.