The term contact resistance refers to the contribution to the total resistance of a material which comes from the electrical leads and connections as opposed to the intrinsic resistance, which is an inherent property, independent of the measurement method. The idea of potential drop on the injection electrode was introduced by William Shockley [1] to explain the difference between the experimental results and the model of gradual channel approximation. The name "contact resistance" was decided for the consideration of the metal–semiconductor interface as a main contribution to this phenomenon. Beside that also "interface resistance", "transitional resistance", or just simply "correction term" were used. Therefore was later used term "parasitic resistance" as a more general term, where it is usually still assumed that the contact resistance has a major contribution. 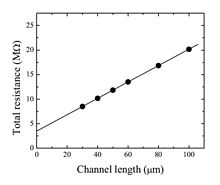 Sketch of the contact resistance estimation by the transmission line method.

For two electrode systems the specific contact resistivity is experimentally defined as the slope of the I-V curve at V=0:

where J is the current density = current/area. The units of specific contact resistivity are typically therefore in Ω.cm2 where Ω stands for ohms. When the current is a linear function of the voltage, the device is said to have ohmic contacts.

Inductive and capacitive methods could be used in principle to measure an intrinsic impedance without the complication of contact resistance. In practice, direct current methods are more typically used to determine resistance.

Beside the TLM it was proposed the gated four-probe measurement [3] and the modified time-of-flight method (TOF) [4]. The direct methods able to measure potential drop on the injection electrode directly are the Kelvin probe force microscopy (KFM) [5] and the electric-field induced second harmonic generation [6].

When a conductor has spatial dimensions close to (2 * π) / kF, where kF is Fermi wavevector of the conducting material, Ohm's law does not hold anymore. These small devices are called quantum point contacts. Their conductance must be an integer multiple of the value 2e2 / h, where e is the electronic charge and h is Planck's constant. Quantum point contacts behave more like waveguides than the classical wires of everyday life and may be described by the Landauer scattering formalism.[7] Point-contact tunneling is an important technique for characterizing superconductors.

Measurements of thermal conductivity are also subject to contact resistance. Similarly, a drop in hydrostatic pressure (analogous to electrical voltage) occurs when fluid flow transitions from one channel to another.

Bad contacts are the cause of failure or poor performance in a wide variety of electrical devices. For example, corroded jumper cable clamps can frustrate attempts to start a vehicle that has a dead battery. Dirty or corroded contacts on a fuse or its holder can give the false impression that the fuse is blown. A sufficiently high contact resistance can cause substantial heating in a high current device. Unpredictable or noisy contacts are a major cause of the failure of electrical equipment.