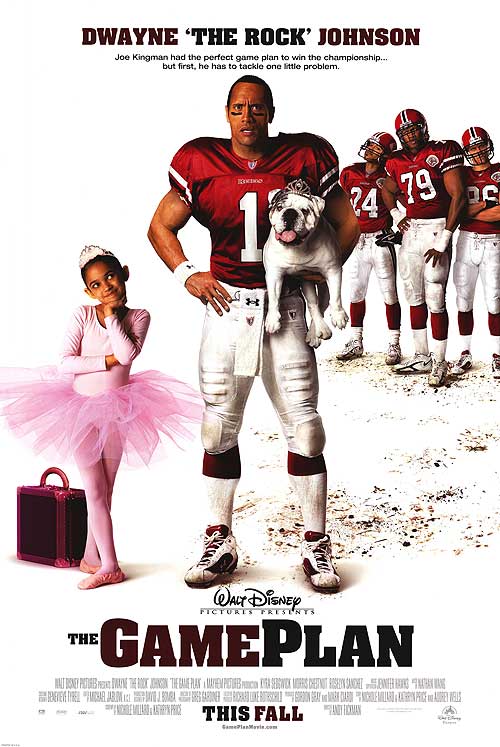 "The Game Plan" is a 2007 feature film directed by and starring Dwayne "The Rock" Johnson.

This is the last movie in which Johnson uses his ring name "The Rock."

* as Travis Sanders
* as Kyle Cooper
* as Jamal Webber
* as Clarence Monroe
* as Karen Kelly
* as Spike the Dog
* as Cindy the Nanny
* as Coach Mark Maddox
* as Tatyana
* as Samuel Blake, Jr.
* as McIlrevy

The film begins as the Boston Rebels are playing their last game of the regular season and their last chance for playoff berth against their rival New York team. At the end of the game, the Rebels' quarterback Joe Kingman (played by former star Dwayne "The Rock" Johnson) is looking to score the winning touchdown, with wide receiver Sanders (played by ) wide open in the end zone, but instead runs it into the end zone himself.

The next morning, Joe gets a surprise when an eight year-old girl named Peyton (played by ) shows up at his doorstep saying that she is his daughter and that her mom sent her here to meet him. Joe's agent, Stella (played by the star ) is not happy about this, thinking it will be bad for Joe's image, and distracts him with the playoffs coming up.

At the opening of Joe's restaurant, he leaves without Peyton, and the next morning is on cover of a tabloid titled "BAD DAD". Stella then decides Joe needs a new fatherly image, and trades his expensive car in for a Station Wagon(Note that the wagon is a ). At a press conference held to explain Joe leaving Peyton at the restaurant, the reporters seem to be making Joe look bad, until Peyton starts speaking and says that Joe is new to this and is trying the best he can, and that she thinks he is the best father in the world. To pay her back for clearing his image at the press conference, Peyton has Joe take her to a ballet academy run by Monique Vasquez ().

Monique has Joe join their ballet performance to show him (in what proves a rather unrealistic manner) that ballet takes just as much athletic ability as football. Joe and Peyton really start to bond after Peyton calls his arrogant and selfish behavior to his attention. Joe takes Peyton and her friends to the mall where he begins to get along with Monique.

The Rebels make it to the Championship Game and Stella tells Joe that if he wins, he gets a $25 million endorsement with a successful fast food restaurant run by Samuel Blake Jr. (played by ). While at lunch with Peyton and Monique, Peyton accidentally tells Joe that her mother does not know that she is with him, and that she was supposed to go to a ballet school program this month, but she ran away from the school to come meet him. He gets upset at her, and she has an allergic reaction to the nuts in the dessert she was eating. She starts coughing, sweating, and can't breathe, and her lips begin . So Joe runs her to the hospital for .

At the hospital, the doctors tell Joe that she is going to be fine, just when Joe's former sister-in-law & Peyton's legal guardian, Karen (played by ) comes and Joe is shocked to see her. (Peyton told him that she was dead.) Karen tells him that it is actually Sara, Joe's ex-wife and Peyton's mother. Sara died in a car accident six months ago.

After overhearing Stella explaining that Peyton would be a distraction to Joe, Peyton tearfully tells Joe she wants to go home with Karen. This saddens Joe and he watches her leave without saying goodbye.

On the day of the championship, Joe is not playing well. He gets injured many times and allows a lot of fumbles. With less than a minute left in the first half, New York's linebacker hits Joe hard in the shoulder and starts taunting him. Joe isn't able to get back up, so he is carried off the field on a stretcher. At halftime, Joe tells Coach Maddox (played by ) to put the second string quarterback, Danville, in the game, believing it is what's best for the team.

Later, Peyton comes into the locker room and jokingly asks Joe if he has money on New York. Karen tells Joe that she was wrong and that she needs to be with her father and Peyton convinces him to go back into the game. Joe tells her that she is the best thing that has ever happened to him and goes back out.

With a minute and three seconds left in the game, and the Rebels losing 7-3, Joe passes the ball to the running back, Webber (played by ) who runs far in the field. Joe then runs the ball himself to the red zone, gets hit hard, but is able to get back up. Next, with four seconds left in the game, Joe passes the ball to Sanders in the end zone and the Rebels win 9-7. Joe turns down the endorsement with the fast food restaurant and says that he is taking Peyton home with him.

The movie ends with Joe Kingman, Peyton, and Monique dancing together in Joe's apartment.

* In the movie, the featured radio station "WZPZ" is also the radio station on "", probably because both are set in .
* In the movie, Joe has problems with the remote, and accidentally turns on the "Disney Channel" with "Hannah Montana" (a show in which Johnson himself made an appearance).
* When Peyton goes to the tea party place at the mall, in the background you can hear singing "Do You Believe in Magic" and singing "".
* In the movie, Peyton turns on the and you can hear singing "The Best of Both Worlds".
* a "The Suite Life of Zack and Cody" star who plays the boys' dad and Carey's ex-husband, Kurt, also plays Sam, the owner of Fanny's Burgers in this film.
* Disney's Movie Surfers are shown when Peyton messes with the TV.
* , who plays Peyton, also plays Sophie Martinez in "".
* The Rock has appeared on the hit series "" and "" alongside as a promotion for the movie. Also In the episode of Cory in the House Dwayne notes he has an 8 year old daughter who he likes having tea with.
* A clip of "" episode "Forever Plaid" was shown on Joe Kingman's television and a clip that features and .Filming was supposed to happen in Toronto.

"The Game Plan" was released on Disney DVD and Disney Blu-ray on , 2008. Through , , DVD rentals for "The Game Plan" were able to stay in the Top 50 chart, while earning more than $48 million. [cite web| url = http://www.boxofficemojo.com/movies/?page=homevideo&id=gameplan.htm| title= Box Office Mojo figures for 'Game Plan' DVD Rentals| publisher = | accessdate = 2008-05-24] Special features include , , and audio commentaries.