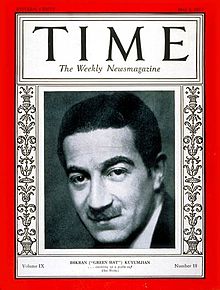 Michael Arlen (Armenian: Մայքլ Արլեն; born Rousse, Bulgaria, November 16, 1895, died June 23, 1956), original name Dikran Kouyoumdjian, was an Armenian essayist, short story writer, novelist, playwright, and scriptwriter, who had his greatest successes in the 1920s while living and writing in England. Although Arlen is most famous for his satirical romances set in English smart society, he also wrote gothic horror and psychological thrillers, for instance "The Gentleman from America", which was filmed in 1956 as a television episode for Alfred Hitchcock's TV series Alfred Hitchcock Presents. Near the end of his life, Arlen mainly occupied himself with political writing. Arlen's vivid but colloquial style "with unusual inversions and inflections with a heightened exotic pitch",[1] came to be known as Arlenesque.

Very much a 1920s society figure resembling the characters he portrayed in his novels, and a man who might be referred to as a dandy, Arlen invariably impressed everyone with his immaculate manners. He was always impeccably dressed and groomed and was seen driving around London in a fashionable yellow Rolls Royce and engaging in all kinds of luxurious activities. However, he was well aware of the latent racism, the contempt for foreigners mixed with envy, with which his success was viewed. Sydney Horler (1888–1954), another popular author of the time, is said to have called Arlen "the only Armenian who never tried to sell me a carpet"[citation needed], while Arlen half-jokingly described himself as "every other inch a gentleman"[citation needed].

Michael Arlen was born Dikran Kouyoumdjian on November 16, 1895, in Rousse, Bulgaria, to an Armenian merchant family. In 1892, Arlen's family moved to Plovdiv, Bulgaria, after fleeing Turkish persecutions of Armenians in the Ottoman Empire. In Plovdiv, Arlen's father, Sarkis Kouyoumdjian, established a successful import business. In 1895, Arlen was born as the youngest child of five, having three brothers, Takvor, Krikor, and Roupen, and one sister, Ahavni. In 1901, apparently not feeling satisfied with Bulgaria's position in the oncoming war, Arlen's family moved once more: this time to the seaside town of Southport in Lancashire, England.[2]

After attending Malvern College and spending a brief time in Switzerland, Arlen enrolled as a medical student at the University of Edinburgh,[3] despite his and his family's intention that he go to Oxford University. If we are to view Arlen's first published book, The London Venture, as being semi-autobiographical, then we will never know why Arlen made this "silly mistake"[4] of going to Edinburgh instead of Oxford. We know however what led Arlen to London, where he would make his break into a literary career.

In The London Venture, Arlen writes: "I, up at Edinburgh, was on the high road to general fecklessness. I only stayed there a few months; jumbled months of elementary medicine, political economy, metaphysics, theosophy--I once handed round programs at an Annie Besant lecture at the Usher Hall--and beer, lots of beer. And then, one night, I emptied my last mug, and with another side-glance at Oxford, came down to London; 'to take up a literary career' my biographer will no doubt write of me." (p. 132)

In 1913, after a few months of university, Arlen moved to London to live by his pen. A year later, World War I broke out and made Arlen's position in England as a Bulgarian national rather difficult. Arlen's nationality was still Bulgarian, but Bulgaria had disowned him because he would not serve in Bulgaria's army. Bulgaria being allies with Germany made England suspicious of Arlen, who could neither be naturalized as an English citizen, nor change his name. In London, Arlen found company in modernist literary circles with others who had been looked upon suspiciously or had been denied military service. Among these were Aldous Huxley, D. H. Lawrence, Nancy Cunard, and George Moore.[5]

Arlen began his literary career in 1916, writing under his birth name, Dikran Kouyoumdjian, first in a London-based Armenian periodical, Ararat: A Searchlight on Armenia, and soon after for The New Age, a British weekly review of politics, arts, and literature. For these two magazines, Arlen wrote essays, book reviews, personal essays, short stories, and even one short play.

Arlen's last submissions to The New Age, a series of semi-autobiographical personal essays entitled "The London Papers", were assembled in 1920 and published with slight revisions as The London Venture. From this moment onwards, Arlen began to sign his works as Michael Arlen. Already in January and April 1920, Arlen two short stories, published in The English Review, signed Michael Arlen. In 1922, Arlen naturalized as a British citizen and legally changed his birth name, Dikran Kouyoumdjian, to Michael Arlen.

In 1920, Arlen also spent some time in France with Nancy Cunard although she was married to someone else at the time — a relationship which fuelled Aldous Huxley's jealousy. During the 1920s, Shepherd Market was a fashionable Mayfair address. Michael Arlen rented rooms opposite The Grapes public house, and later used Shepherd Market as the setting for The Green Hat.

After "The London Venture", Arlen worked on romances, spicing them with elements of psychological thrills and horror, including The Romantic Lady, These Charming People, and "Piracy": A Romantic Chronicle of These Days. In These Charming People, for instance, Arlen wrote tales which included elements of fantasy and horror, in particular "The Ancient Sin" and "The Loquacious Lady of Lansdowne Passage". The volume also introduced a gentleman crook reminiscent of Raffles in the story "The Cavalier of the Streets". The title of another story, "When a Nightingale Sang in Berkeley Square", was the inspiration for the popular song of the same name.

The above works eventually culminated into the book that would launch Arlen's fame and fortune in the 1920s: The Green Hat, published in 1924. The Green Hat was turned into a play, produced on Broadway, successfully, in 1925 starring Katherine Cornell and almost simultaneously but less successfully in London's West End starring Tallulah Bankhead, and a Hollywood movie (silent) in 1928, starring Greta Garbo and John Gilbert. Because The Green Hat was considered provocative in the United States, the movie was not allowed to make any references to it and was therefore dubbed A Woman of Affairs. The film also obscured/altered plot points concerning homosexuality and venereal disease. It was adapted a second time in 1934, as Outcast Lady, with Constance Bennett and Herbert Marshall in the main roles.

After the publication of The Green Hat, Arlen became almost instantly famous, rich, and like celebrities today, incessantly in the spotlight and newspapers. During this period of his fame, the mid-1920s, Arlen frequently travelled to the United States and worked on plays and films, including "Dear Father" and These Charming People.

Naturally, after all this fame and attention, Arlen felt somewhat anxious to write the book that would follow The Green Hat. Notwithstanding, Arlen wrote Young Men in Love (1927) and received mixed reviews.

After Young Men in Love, Arlen continued with Lily Christine (1928), Babes in the Wood (1929), and Men Dislike Women (1931), none of which received the enthusiastic reviews that The Green Hat had received.

Adulthood: Off to America

In 1927, Arlen, feeling ill, joined D. H. Lawrence in Florence, where Lawrence was working on Lady Chatterley's Lover, for which Arlen served as a model for Michaelis.

In 1928, Arlen married Countess Atalanta Mercati in Cannes, France, to where he had moved. They had had two children, a son, Michael John Arlen born in 1930, and a daughter, Venetia Arlen, born in 1933.

With his following novel, Man's Mortality (1933), Arlen turned to political writing and science fiction, brushing aside his earlier, smart society romances. Set fifty years in the future, in 1983, the book can be seen as portraying a Dystopia, whose rulers claim that it is a Utopia. Most critics compared it unfavourably with Huxley's Brave New World, which had been published the year before.

In the following years, Arlen also returned to gothic horror with Hell! Said the Duchess: A Bed-Time Story (1934). In his final collection of short stories, The Crooked Coronet (1939), Arlen briefly returns to his earlier romantic, but also comic, style. Arlen's claim to fame in the world of crime fiction rests on one short story, "Gay Falcon" (1940), in which he introduced gentleman sleuth Gay Stanhope Falcon. Renamed Gay Lawrence and nicknamed the Falcon, the character was taken up by Hollywood in 1941 and expanded into a series of mystery films with George Sanders in the title role. When Sanders left the role, he was succeeded by his brother Tom Conway, who played Gay Lawrence's brother Tom and also used the nickname the Falcon.

In 1939, in the midst of World War II, Arlen returned to England to serve England in World War II. While his wife, Atalanta, joined the Red Cross, Arlen wrote columns for The Tatler. That same year, his final book, The Flying Dutchman (1939), was published, a political book, commenting harshly on Germany's position in World War II.

In 1940, Arlen was appointed Civil Defense Public Relations Officer for the East Midlands, but when his loyalty to England was questioned in the House of Commons in 1941, Arlen resigned and moved to America, where he settled in New York in 1946. For the next ten years of his life, Arlen suffered from writer's block, until he died of cancer on June 23, 1956.