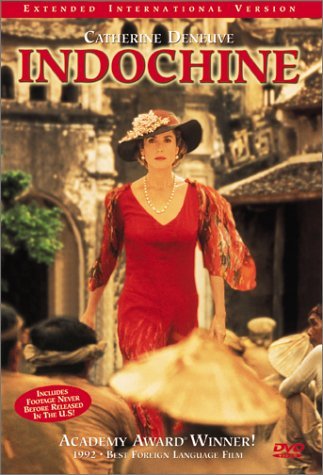 "Indochine" is an winning French film that tells the story of a young woman named Camille. The title refers to the colony of , of which modern was once a part. The screenplay was written by novelist , script writers , and director . It was directed by Wargnier. It stars , , , and .

At the outset of the movie, Camille, a young girl from an Annamese aristocratic family, is adopted by Éliane Devries after her parents die in a plane crash. Madame Devries owns and runs a large in French Indochina that employs many indentured laborers. Madame Devries raises Camille as her daughter.

Madame Devries meets and has a fleeting affair with a younger man, Jean-Baptiste Le Guen, a lieutenant in the .

When Camille is sixteen, a French police officer shoots a Vietnamese prisoner who is escaping through the city streets. Camille and her classmates had been walking nearby, and just as the prisoner is about to be shot he runs past Camille. The prisoner then falls dead onto Camille, knocking her unconscious and covering her with his blood. Jean-Baptiste finds Camille, brings her to safety, and cleans off the blood -- cutting off her dress in the process. Camille awakens in Jean-Baptiste's arms. She immediately falls in love with him.

Apparently through her connections with high-ranking officials in the French Navy, Madame Devries has Jean-Baptiste transferred to Haiphong to protect Camille from being hurt. Jean-Baptiste confronts Madame Devries about this at a Christmas party celebration at her home, and a loud spat ensues. As a result of his misbehavior, instead of being transferred to Haiphong Jean-Baptiste is sent to a remote French military base in the north of French Indochina, on an island known as "Dragon Island."

Against her better judgment, Madame Devries permits Camille to become engaged to Tanh, a young man who has studied in and supports the Communists. The marriage is arranged by Tahn's wealthy, merchant mother. The day after the engagement, Tanh allows Camille to leave and look for Jean-Baptiste up north.

Camille travels with a Vietnamese family, and reaches Dragon Island. On the island is a market when plantation owners from the South procure indentured servants. The family with whom Camille was traveling wished to find work in this manner, but they are killed by a French naval officer. When Jean-Baptiste arrives on the scene and demands that the officer tell him what happened, the officer says that the family refused to be split up, and started inciting a riot by yelling communist slogans.

Jean-Baptiste sees Camille among the laborers and starts to lead her away. However, upon seeing her traveling companions dead, Camille attacks the French officer and then shoots him with his own gun.

Camille and Jean-Baptiste escape from the island and sail away through the Gulf of Tonkin for many days without food or water. Eventually, they come ashore and are rescued by a Communist theater troupe. The theater troupe takes them to a hidden valley where they are hidden in a large complex of buildings. Eventually, they must leave the valley because the Communists have other, more important people to hide, but Tanh -- who is now a high-ranking Communist operative -- arranges for the theater troupe to smuggle the lovers into .

Guy, the leader of the French police in the South -- a friend and former suitor of Madame Devries -- attempts to use operatives to put down the insurrection. Guy arranges for French agents to look for Camille and Jean-Baptiste in the North. They look up and down the Gulf of Tonkin but with no success.

One morning, when they are just a few hours from the Chinese border, Jean-Baptiste takes his and Camille's newborn son, Étienne, to be baptized in a river while Camille is sleeping. Jean-Baptiste and Etienne are captured by the French; Camille and the theater troupe escape. French authorities give Étienne to Madame Devries.

Jean-Baptiste spends time in prison and does not speak with anyone. Eventually, however, he agrees to talk if he can first see his son. The Navy, which plans to try Jean-Baptiste in France to avoid a trial in Indochina (and who have refused to permit Guy and the French police to interrogate Jean-Baptiste) allows Jean-Baptiste 24 hours to see his son and settle his affairs before leaving for France. Jean-Baptiste goes to see Madame Devries. She allows him to care for his son Étienne for one night at her other house, in Saigon.

The next day, when Madame Devries arrives at the house to pick up Étienne, she discovers Jean-Baptiste lying in bed, shot dead in the temple, gun in hand. Étienne is safe in the bed next to him. Madame Devries is outraged. She tells Guy that she suspects the police. However, Guy's girlfriend tells Madame Devries that the Communists probably killed Jean-Baptiste, to keep him quiet. The killing is eventually ruled a suicide.

Camille is captured and sent to prison. Neither Guy nor Madame Devries can see Camille. Madame Devries lobbies government officials for Camille's freedom, to no avail. After five years, the Popular Front comes to power and releases all political prisoners, including Camille. Madame Devries goes to the prison to take Camille home. However, rather than return home to her mother and son, Camille resolves to join the Communists to fight for her country's independence. She does not wish for her son to know the horror she has witnessed.

Years later, Madame Devries tells Étienne the story of his mother. Madame Devries takes Étienne to Geneva, where his mother Camille apparently is a delegate to the Geneva Conference. Étienne goes to the hotel where Camille is staying, but he cannot bring himself to go to see her. He waits for her in the lobby, but she does not come. He returns to Madame Devries and tells her that she is his mother.

The next day, French Indochina becomes independent from France. It is divided up into North and South Vietnam.

The movie won the for Best Foreign Language Film and Catherine Deneuve received a nomination for the . It also won the .