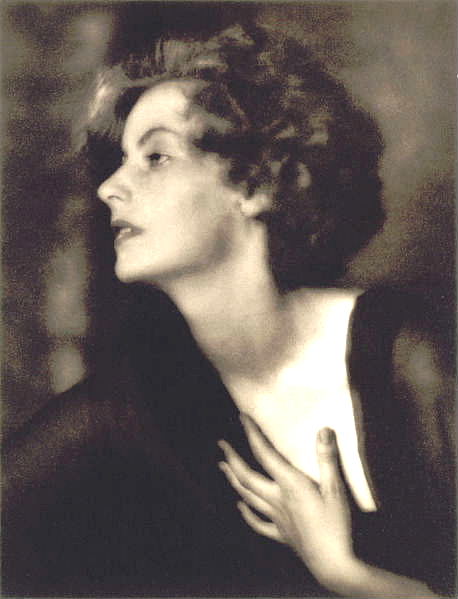 Greta Garbo ( &ndash; ) was a actress during 's period and part of its Golden Age.

Regarded as one of the greatest and most inscrutable s ever produced by and the Hollywood , Garbo received a 1954 Honorary Oscar "for her unforgettable screen performances"

When Garbo was 14 years old, her father, to whom she was extremely close, died. She was forced to leave school and go to work. Her first job was as a soap-lather girl in a barbershop. She stated in the book "Garbo On Garbo" (p. 33) that her relationship with her mother was not strained.

She then became a clerk at the department store PUB in Stockholm, where she would also model for newspaper advertisements. Her first motion picture aspirations came when she appeared in two short film advertisements (the first for the department store where she worked). They were eventually seen by comedy director Erik Arthur Petschler and he gave her a part in his upcoming film "Peter the Tramp" (1922).

From 1922 to 1924, Garbo studied at the prestigious in Stockholm. While there, she met director . He trained her in cinema acting technique, gave her the "Greta Garbo", and cast her in a major role in the silent film "Gösta Berlings Saga" (English: "The Story of Gösta Berling") in 1924, a dramatization of the famous novel by Nobel Prize winner . She starred in "Gösta Berling" opposite Swedish film actor , then appeared in the German film "" ("The Street Of Sorrow", 1925), directed by and co-starring .

She and Stiller were brought to by when "Gösta Berlings Saga" caught his attention. On viewing the film during a visit to , Mayer was impressed with Stiller's direction, but was much more taken with Garbo's acting and screen presence. According to Mayer's daughter, , with whom he screened the film, it was the gentle feeling and expression that emanated from her eyes which so impressed her father.

Unfortunately, her relationship with Stiller came to an end as her fame grew and he struggled in the studio system. He was fired by MGM and returned to Sweden in 1928, where he died soon after. Garbo was also close friends with , a Swedish actor who worked with her and Pabst on "The Street Of Sorrow", and then came to Hollywood to work at MGM and . Einar Hanson was killed in an auto accident in 1927, after leaving a dinner with Garbo and Stiller. Garbo's sister Alva died of cancer in 1926 at the age of 23 after appearing in one feature film in Sweden, adding to the melancholy Garbo felt at being in Hollywood. MGM refused to allow Garbo to return to Sweden for her sister's funeral, and Garbo was only able to return to Sweden for a visit in 1928.

Having achieved enormous success as a silent , she was one of the few actors who made the transition to talkies, though she delayed the shift for as long as possible. Her film "" (1929) was the last film MGM made without dialogue (it used a soundtrack with music and sound effects only).

Her voice was first heard on screen in 's "Anna Christie" (1930), which was publicized with the slogan "". The movie was a huge success. In 1931 Garbo made a German version of the movie.

She then had a dispute with MGM. She signed a new contract in July 1932, departing for Sweden later the same month. She exercised her new control by having her leading man in "Queen Christina" (1933), , replaced with Gilbert. In 1935, wanted her cast as the dying heiress in "", but she insisted on doing Tolstoy's "Anna Karenina". would eventually play the Judith Trahenre role in "" and score her third Oscar nomination.

Her role as the doomed in "Camille" (1936), directed by , would be regarded by Garbo as her finest acting performance. She then starred opposite in "" (1939), directed by .

"" was a successful attempt at lightening Garbo's image and making her less exotic, by the insertion of a scene in a restaurant in which her character breaks into uninhibited laughter which provided the film with its famous , "Garbo laughs!". The follow-up film, "" (1941), attempted to capitalize by casting Garbo in a romantic comedy, where she played a double role that featured her dancing, and tried to make her into "an ordinary girl". The film, directed by , was a critical (though not a commercial) failure. It was Garbo's last official screen appearance.

It is often reported that Garbo chose to retire from cinema after this film's failure, but already by 1935 she was becoming more choosy about her roles, and eventually years passed without her agreeing to do another film. By her own admission, Garbo felt that after the world changed, perhaps forever.

:"It was because of Garbo that I left MGM. In her last picture they wanted to make her a , a real American type. I said, 'When the glamour ends for Garbo, it also ends for me. She has created a type. If you destroy that illusion, you destroy her.' When Garbo walked out of the studio, glamour went with her, and so did I."Fact|date=February 2007

Her last interview was probably with the celebrated entertainment writer Paul Callan of the "" during the . Meeting at the Hotel du Cap Eden Roc, Callan began "I wonder . . ", before Garbo cut in with "Why wonder?", and stalked off, making it one of the shortest interviews ever published.

She gradually withdrew from the entertainment world and moved to a secluded life in , refusing to make any public appearances. Up until her death, Garbo sightings were considered sport for photographers. In 1974, pornographic filmmaker Peter De Rome tracked Garbo across New York and shot unauthorized footage of her for inclusion in his feature "". [ [http://www.chicagofreepress.com/node/1312 "Adam & Yves," Chicago Free Press] ]

Despite these attempts to flee from fame, she was nevertheless voted Best Silent Actress of the Century (her compatriot winning the Best Sound Actress) in 1950, and was also designated as the most beautiful woman who ever lived by the . [ [http://www.postgazette.com/pg/07252/815281-37.stm Garbo's lonely legacy: Seeking the actress's final resting place ] ] [ [http://en.epochtimes.com/news/5-11-2/34045.html The Epoch Times | Greta Garbo Returns ] ] [ [http://www.slantmagazine.com/dvd/dvd_review.asp?ID=750 Slant Magazine - DVD Review: Garbo – The Signature Collection ] ] [ [http://www.imdb.com/name/nm0001256/bio Greta Garbo - Biography ] ]

Garbo was considered one of the most glamorous movie stars of the 1920s and 1930s. She was also famous for shunning , which became part of her mystique. Except at the very beginning of her career, she granted no interviews, signed no autographs, attended no premieres, and answered no fan mail.

Her famous was always said to be, "I want to be alone," spoken with a heavy accent which made the word "want" sound like "vont." This quote as noted comes from her role in "Grand Hotel". However, Garbo later commented, "I never said, 'I want to be alone.' I only said, 'I want to be "let" alone.' There is all the difference." This byline was referenced in the movie "", where it was used in a comedic way, implying that Garbo had taken the eternally young potion used in the movie plot.

The 1995 biography "Garbo" by relates Garbo's relationships - which were often just close friendships - with actor , conductor , nutritionist (and gay man) , and her manager , husband of designer Valentina.

In 1931, Garbo met and quickly befriended . The two were introduced to one another by de Acosta's close friend, author , who was also very close to Garbo and wrote the screenplay for several of Garbo's films. Her relationship with Garbo has often been described as "the love of her lifetime". From all information from the time, it is unlikely that Garbo shared those feelings. Garbo was in control of the friendship, which was close for about a year from 1931 to 1932.

But thereafter, theirs was a vacillating relationship, with Garbo even ignoring de Acosta -everything was at the will of Garbo. Estranged by 1937, in 1944, Garbo insisted de Acosta stop sending her poems and letters professing her love. The last known poem of hers for Garbo was written that same year. Their relationship finally ended when De Acosta wrote about her affairs in the autobiography "Here Lies the Heart" (1960).

Garbo felt her movies had their proper place in history and would gain in value. On 9 February 1951, she became a of the . In 1954 she was awarded a special Academy Award.

She would at times jet-set with some of the world's best known personalities such as and , but chose to live a private life. She was known for taking long walks through the New York streets dressed casually and wearing large sunglasses, always avoiding prying eyes, the , and media attention. Garbo did, however, receive one last flurry of publicity when nude photos, taken with a long-range lens, were published in "People" in 1976. Trim and relaxed, she was enjoying a swim.

Garbo lived the last years of her life in absolute seclusion. She had invested very wisely, particularly in commercial property along in Beverly Hills, was known for extreme , and was very wealthy.

She died in New York Hospital on 15 April 1990, aged 84, as a result of and renal failure, which had shut down her stomach and s. She had previously been operated on and treated for , which required a partial , from which she recovered. Fact|date=October 2007

She was cremated and her ashes were finally interred after a long legal battle at the Skogskyrkogården Cemetery in her native Stockholm. She left her entire estate, estimated at $20,000,000 to her niece, Gray Reisfield of .

For her contributions to cinema, she has a star on the at 6901 . In addition, in September 2005, the and Swedish Posten jointly issued two s bearing her likeness. [cite press release
title=Greta Garbo Has Starring Role on U.S. Postal Stamp |publisher=United States Postal Service |date=2005-09-25
url=http://www.usps.com/communications/news/stamps/2005/sr05_045.htm |accessdate=2008-07-09
quote=...the U.S. Postal Service and Sweden Post jointly issued two commemorative postage stamps bearing her likeness. Both stamps, issued near what would have been her 100th birthday, are engravings based on a 1932 photograph.... ] [cite journal
author=ed. William J. Gicker |year=2006 |title=Greta Garbo 37¢ |format=print |journal=USA Philatelic |volume=11 |issue=3 |pages=12
url= |accessdate=2008-07-09 ]