List of James Bond henchmen in You Only Live Twice

List of James Bond henchmen in You Only Live Twice

A list of henchman from the 1964 novel and the 1967 James Bond film You Only Live Twice from the List of James Bond henchmen. Other than Irma Bunt, none of these characters were in the novel and Bunt is the only novel henchwoman not in the film.

See also: List of James Bond henchmen in On Her Majesty's Secret Service

Irma Bunt made her second appearance in the novel series posing as Ernst Stavro Blofeld's wife 'Emmy Shatterhand' while the couple went into hiding in Japan. Conversational exchange between the two suggest that they are in fact, lovers with Bunt seeming deeply in awe of Blofeld. It is Bunt who recognizes Bond, who has disguised himself as a Japanese coal-miner, and reveals his true identity to Blofeld. Prior to Bond and Blofeld's final encounter, Bond knocks her unconscious and escapes the castle after triggering a geyser to destroy the structure; it is later stated that she died as the castle fell.

Hans is the personal bodyguard of SPECTRE mastermind Ernst Stavro Blofeld. He is a tall (6 ft 8 inches), muscular blonde man wearing an all-black outfit who never speaks and appears in the film You Only Live Twice, played by Ronald Rich and credited simply as "Blofeld's Bodyguard."

Hans is introduced in the film in the first scene we see of Blofeld's volcano lair. During a meeting between Blofeld and some of SPECTRE's investors who are paying him to start a war between Russia and the United States of America, Hans is shown feeding Blofeld's pet piranhas. He is also present during the execution of Helga Brandt by the same piranhas. When James Bond is captured and brought before Blofeld in the control room, Hans moves to stand between his master and 007, effectively blocking Blofeld's face from the camera's view of the villain's face, as per Blofeld's previous film appearances. However Blofeld makes Hans step aside, revealing his scarred visage to Bond for the first time.

During the assault on the volcano lair by Tiger Tanaka's ninja strike force, Blofeld opts to escape with his life, and here we see how loyal Hans is to his employer. Rather than accompany Blofeld, Hans is commanded to remain behind and blow up SPECTRE's rocket ship after it intercepts an American one in space. Hans dutifully obeys, and ends up getting into an extended fight with Bond in Blofeld's office when the British agent attempts to get into the control room to blow up the SPECTRE rocket before it captures the American one. The fight ends when Bond throws Hans into the pool with the very same piranhas he'd been seen feeding earlier, and the hulking bodyguard is devoured alive as Bond wishes the fish "Bon appetit!"

As played by Ronald Rich, Hans' appearance as an imposingly tall, tough, steel-eyed blond enforcer recalls Robert Shaw's characterization of the menacing and ruthless blond SPECTRE assassin, Red Grant, in From Russia with Love, and later characters Erich Kriegler from For Your Eyes Only, Necros from The Living Daylights, and Stamper from Tomorrow Never Dies.

Helga Brandt was played by Karin Dor as a minor villain and a henchwoman of Ernst Stavro Blofeld in the James Bond film You Only Live Twice. She is Number 11 in the SPECTRE hierarchy and poses as a secretary to Mr. Osato, a SPECTRE operative posing as an industrialist.

Bond first meets Brandt (whose first name is never mentioned in the film) when he comes to meet Osato. She and Osato arrive via helicopter. After being introduced to Bond, she offers him a glass of champagne, which he politely turns down. When Bond leaves, Osato orders Brandt to kill 'Mr. Fisher'. Later at the Kobe docks, Bond is captured and taken to see her on board the freighter Ning-Po. Knowing that she will be killing Bond later, she allows herself to be seduced by him, pretending to defect to his side. During the "interrogation", 007 lies saying that he is an industrial spy and offers Helga $150,000 to help him escape back to Tokyo. (He intended to obtain this kind of money from the value of Osato's recipe for creating monosodium glutamate, which is worth twice this amount). The next day, while travelling in a Meyers 200, however, she parachutes out after dropping a magnesium flare (disguised as a tube of lipstick) onto the floor, leaving Bond to try and control the diving plane; he manages an emergency landing, narrowly escaping before the plane blows up . Later at Blofeld's volcano lair, the villain calls Brandt and Osato to his quarters. At first, Blofeld accused Osato of failing to kill Bond but, displeased with Number 11's failures, Blofeld feeds her to his school of piranhas when she walks onto the trapdoor bridge suspended over the pool leading to Blofeld's quarters.

According to Karin Dor, who is a natural brunette, the producers wanted a "blonde, blue-eyed, tall German girl (to play Helga Brandt) and they ended up with me". As a compromise, the filmmakers dyed Dor's hair red for the movie.

Even though there was no Helga Brandt in the novels, Brandt was the name of Emilio Largo's mechanic in the book Thunderball.

Mr. Osato is a fictional character in the James Bond film You Only Live Twice. He is a henchman to Ernst Stavro Blofeld and is portrayed by Teru Shimada.

Mr. Osato is the head of Osato Chemicals and Engineering and also a member of SPECTRE. When Bond follows an assassin of his contact Henderson, he goes to Osato's company and finds a safe that tells him a few things. Bond then meets Mr. Osato and Helga Brandt, his henchwoman and SPECTRE No.11. Osato orders his men to kill Bond, who escapes thanks to Aki. Osato then captures Bond, and leaves him with Helga, for her to kill. Bond manages to survive again. Osato is then seen with Helga talking to their boss, Ernst Stavro Blofeld, about Bond. Blofeld gives Osato and Brandt the strictest order to kill Bond; however, Blofeld decides to kill Helga as a warning. Osato watches in horror as a screaming Brandt is eaten alive by piranhas, and he is then left on his own to carry out Bond's execution.

Osato attempts to kill Bond by using a fake ninja who has a knife but Bond outsmarts him. The other way is by dropping poison into his mouth while he is asleep, which because he turned over, killed Aki instead. Both these attempts were carried out by his henchmen, and Osato is at the end scene. Bond is captured by Osato and Blofeld. Blofeld takes his gun and points it at Bond while uttering the words "This is the price of failure," but then turns the gun and shoots Osato instead. 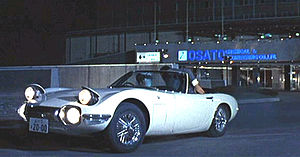 SPECTRE #3 is a fictional character in the James Bond film You Only Live Twice. He is a henchman to Ernst Stavro Blofeld and is portrayed by Burt Kwouk (who previously appeared as Red Chinese agent Mr. Ling in Goldfinger).

SPECTRE #3 is Blofeld's apparent technical liaison. He is witnessed overseeing the rocket launching/retrieving operations. During the attack against Blofeld's volcano lair by Tiger Tanaka and his ninjas, #3 is killed. Precisely how and when is never shown, but when SPECTRE #4 and the remaining technicians evacuate the control room, #3 is shown dead at his console. Likely he was killed by an explosion from one of the malfunctioning computer terminals.

SPECTRE #4 is a fictional character in the James Bond film You Only Live Twice. He is also henchman to Ernst Stavro Blofeld and is portrayed by Michael Chow.

SPECTRE #4 is first seen in the film at Osato Chemicals, apparently posing as Mr. Osato's secretary. He spies on Bond during his meeting with Osato and Helga Brandt. Later, #4 is shown assisting SPECTRE #3 in the control room of Blofeld's volcano lair. After #3 is killed during the ninja attack on the lair, #4 orders the control evacuated, leading the surviving guards and technicians through Blofeld's office and out a secret escape door. This provides Bond with a means of getting up to the control room to stop the interception of the second American spacecraft by SPECTRE's rocket.

What became of SPECTRE #4 (and, for that matter, the technicians with him) following this is unknown. Presumably they escaped from the lair before its destruction.

Assassin in Bedroom is a henchmen for Mr. Osato, portrayed by David Toguri.

He is sent to kill Henderson before he tells Bond about the Osato Chemicals being involved in SPECTRE's plans. After Henderson dies, Bond chases the assassin and kills him with his own switchblade. Seeing a getaway car is near, Bond takes the assassin's clothes and mask and climbs into the backseat so the driver takes him to the assassin's origins.

Car Driver is a fictional character in the James Bond film You Only Live Twice. He is a chauffeur/bodyguard to Mr. Osato and portrayed by professional wrestler Peter Fanene Maivia.

He was assigned to drive an assassin (David Toguri) to Henderson's house. Later, the assassin is killed by Bond, who takes his clothes and mask so the Car Driver would lead him to their headquarters (Osato Chemicals). The Car Driver carries the body to Osato's room, and when he takes off the mask, discovers it isn't his partner. Bond takes his gun but the Car Driver disarms him, and the two start fighting. The fight only finishes when Bond hits Car Driver in the head with a statue, which breaks in half. Bond then hides him in the freezer.