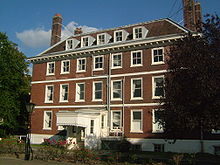 The Commissioner's House (1704), was built for Captain George St Lo who found the previous house unsuitable. It remains the oldest surviving naval building in England.

Chatham Dockyard, located on the River Medway and of which two-thirds is in Gillingham and one third in Chatham, Kent, England, came into existence at the time when, following the Reformation, relations with the Catholic countries of Europe had worsened, leading to a requirement for additional defences. For 414 years Chatham Dockyard provided over 500 ships for the Royal Navy, and was forefront of shipbuilding, industrial and architectural technology. At its height, it employed over 10,000 skilled artisans and covered 400 acres (1.6 km²). Chatham dockyard closed in 1984, and 84 acres (340,000 m2) of the Georgian dockyard is now managed as a visitor attraction by the Chatham Historic Dockyard Trust.

The Treasurer of the Navy's accounts of the King's Exchequer for the year 1544 identifies Deptford as the Dockyard that carried out all the major repairs to the King's Ships that year. That was soon to change, although Deptford remained a dockyard for over three centuries. In 1547 Jillingham (Gillingham) water, as Chatham Dockyard was then known, is mentioned as second only in importance to Deptford; followed by Woolwich, Portsmouth and Harwich. In 1550 ships that were then lying off Portsmouth were ordered to be harboured in Jillingham Water, “by reason of its superior strategic location” . Chatham was established as a royal dockyard by Elizabeth I in 1567. She herself visited the yard in 1573. By the late 17th century it was the largest refitting dockyard, important during the Dutch wars. It was, however superseded first by Portsmouth, then Plymouth, when the main naval enemy became France, and the Western approaches the chief theatre of operations. In addition, the Medway had begun to silt up, making navigation more difficult. Chatham became a building yard rather than a refitting base. In 1622, the dockyard moved from its original location (now the gun wharf to the south) to its present site. Among many other vessels built in this Dockyard and which still exist are HMS Victory, launched in 1765 - now preserved at Portsmouth Naval Base (formerly Portsmouth Royal Dockyard), and HMS Unicorn, (a Leda class frigate) launched 1824 - now preserved afloat at Dundee. Between 1862 and 1885, the yard had a large building programme and St Mary's basins were constructed along St Mary's creek. The three basins were 28 acres (110,000 m2), 20 acres (81,000 m2) and 21 acres (85,000 m2). There were four new dry docks. Much of the work was done by convict labour. The construction materials required regenerated the North Kent brick and cement industries. It is estimated that 110 million bricks were used. These basins formed the Victorian Dockyard. Chatham built on average, two new ships each year.[1] When the yards at Deptford and Woolwich closed in 1869, Chatham again became relatively important and remained so until 1983 when it closed. With the twentieth century came the submarine. The C17 was launched at Chatham in 1908, and during World War I, twelve submarines were built here, but when hostilities ceased uncompleted boats were scrapped and it was five years before a further ship was launched. In the prewar years, 8 'S' class submarines were built. This was a period of decline. During World War II there were 1,360 refits and sixteen launchings.[1] The final boats constructed in Chatham were Oberon class submarines - Ocelot was the last vessel built for the Royal Navy, and the final vessel was Okanagan built for the Royal Canadian Navy, launched on 17 September 1966. In 1968, a nuclear submarine refitting complex was built complete with refuelling cranes and health physics building. In spite of this in June 1981, it was announced to Parliament that the dockyard would be run down and closed in 1984.[1] The Georgian site is now a visitor attraction, under the care of the Chatham Historic Dockyard Trust. The Trust is preparing an application for the Dockyard and its Defences to become a World Heritage Site.[2] The Basins have new uses, St Mary's Island is now housing and part of the Victorian Dockyard forms the portal to the Medway Tunnel. Other military buildings have now been refitted and are used by the Universities at Medway.

Francis Drake also lived in the old hulks there and spent his youth in Medway.

Significant buildings within the Georgian Dockyard

Anchor Wharf and the Ropery

Defence of the dockyard 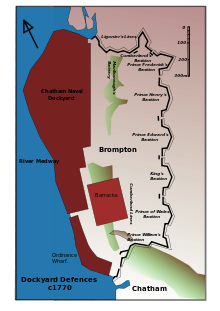 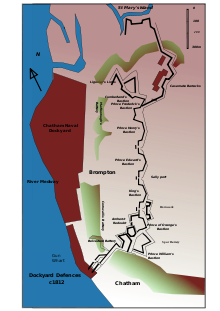 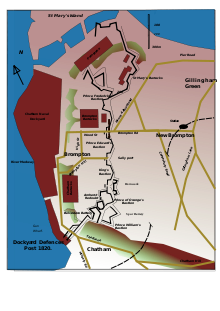 How the military presence developed after 1820, showing how the need for housing gave birth to New Brompton, showing roads and railways.

Dockyards have always required shore defences. Among the earliest for Chatham was Upnor Castle, built in 1567, on the opposite side of the River Medway. It was somewhat unfortunate that on the one occasion it was required for action in the Raid on the Medway, 1667, the Dutch fleet were able to sail right past it to attack the British fleet, to carry off the pride of the fleet the Royal Charles back to the Netherlands.

During the wars with Spain it was usual for ships to anchor at Chatham in reserve; consequently John Hawkins threw a massive chain across the River Medway for extra defence. Hawkins' chain was later replaced with a boom of masts, iron, cordage, and the hulls of two old ships, besides a couple of ruined pinnacles. This arrangement was again upgraded around 1645.

With the failure of Upnor castle it was seen necessary to increase the defences. In the event, those defences were built in distinct phases, as the government saw the increasing threat of invasion. The building was as follows [complete details can be seen at the external link]:

Growth of the dockyard

The growing importance of the dockyard was illustrated between 1619-20 with the addition of two new mast ponds, and the granting of additional land on which a dock, storehouse, and various brick and lime kilns were planned.

The renewed outbreak of war with Spain demonstrated the need for such readiness, and in 1710 land was ordered to be bought to improve the dockyard.

By the year 1770 the establishment had so expanded that, including the gun wharf, it stretched a mile (1.6 km) in length, and included an area of in excess of 95 acres (384,000 m²), possessing four slip ways and four large docks.

The officers and men employed in the yard also increased, and by 1798 they numbered 1,664, including 49 officers and clerks and 624 shipwrights. Additionally required were the blockmakers, caulkers, pitch-heaters, blacksmiths, joiners and carpenters, sail makers, riggers, and ropemakers (274), as well as bricklayers, labourers and others.

The dockyard's final task was refitting nuclear submarines. HMS Hermione was the last ship launched from there, though she had not been built there, but merely refitted.

The dockyard closed in 1984. It covered 400 acres (1.6 km²). After closure this was divided into three sections. The easternmost basin was handed over to the Medway Ports authority and is now a commercial port. 80 acres (324,000 m²), comprising the 18th century core of the site, was transferred to a charity called the Chatham Historic Dockyard Trust and is now open as a visitor attraction. The other tranche was converted into a mixed commercial, residential and leisure development.

St Mary's Island, a 150-acre (0.61 km2) site, once a part of the Dockyard, has been transformed to a residential community for some 1,500 homes. It has several themed areas with traditional maritime buildings, a fishing (in looks only) village with its multicoloured houses and a modern energy-efficient concept. Many homes have views of the River Medway. A primary school (St. Mary's CofE) and a medical centre provide facilities for the residents and there are attractive walks around the Island. 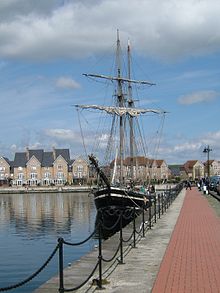 The Topsail Schooner Julia visiting the middle basin in 2006, behind her you can see the St Mary's Island housing estate.