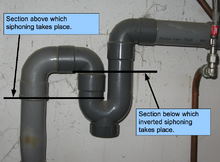 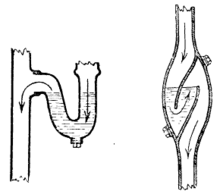 In plumbing, a trap is a U-, S-, or J-shaped pipe located below or within a plumbing fixture. An S-shaped trap is also known as the S-bend invented by Alexander Cummings in 1775 but became known as the U-bend following the introduction of the U-shaped trap by Thomas Crapper in 1880. The new U-bend could not jam, so, unlike the S-bend, it did not need an overflow. The bend is used to prevent sewer gases from entering buildings. In refinery applications, it also prevents hydrocarbons and other dangerous gases from escaping outside through drains.

The most common of these traps in houses is referred to as a P-trap. It is the addition of a 90 degree fitting on the outlet side of a U-bend, thereby creating a P-like shape. It can also be referred to as a sink trap due to the fact it is installed under most house sinks.

Because of its shape, the trap retains a small amount of water after the fixture's use. This water in the trap creates a seal that prevents sewer gas from passing from the drain pipes back into the occupied space of the building. Essentially all plumbing fixtures including sinks, bathtubs, and toilets must be equipped with either an internal or external trap.

Because it is a localized low-point in the plumbing, sink traps also tend to capture heavy objects (such as jewelry) that are inadvertently dropped into the sink. Traps also tend to collect hair, sand, and other debris and limit the ultimate size of objects that will pass on into the rest of the plumbing, thereby catching over-sized objects. For all of these reasons, most traps can either be disassembled for cleaning or they provide some sort of cleanout feature. 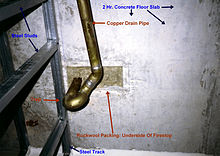 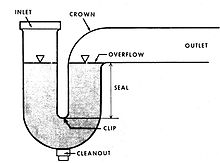 Maintaining the water seal is critical to trap operation; traps can and do dry out, and poor venting can siphon or blow water out of the traps. This is usually avoided by venting the drain pipes downstream of the trap; by being vented to the atmosphere outside the building, the drain lines never operate at a pressure much higher or lower than atmospheric pressure. Plumbing codes usually provide strict limitations on how far a trap may be located from the nearest vent stack.

When a vent cannot be provided, codes may allow the use of an air admittance valve instead. These devices avoid negative pressure in the drain pipe by venting room air into the drain pipe (behind the trap). A "Chicago Loop" is another alternative.

When a trap is installed on a fixture that is not routinely used, the eventual evaporation of the water in the trap must be considered. In these cases, a trap primer may be installed; these are devices that automatically recharge traps with water to maintain their water seals. 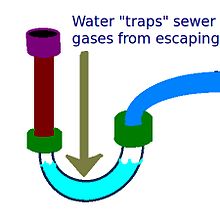 Gravity holds water to act as a barrier, preventing the escape of sewer gases. If a plumbing fixture is not used over a month or so, the water in the trap will evaporate, allowing noxious odors to escape.

In many locations, "S" traps are no longer accepted by the plumbing codes and are even illegal, as these traps tend to easily siphon dry even when well-vented. It is often possible to tell whether a household uses an S or U-bend by checking for the presence of an overflow pipe outlet. Certain drum-styled traps are also discouraged or banned.