The ICC ODI Championship is an international One Day International cricket competition run by the International Cricket Council. The competition is notional in that it is simply a ranking scheme overlaid on the regular ODI match schedule. After every ODI match, the two teams involved receive points based on a mathematical formula. The total of each team's points total is divided by the total number of matches to give a rating, and all teams are ranked on a table in order of rating.

By analogy to cricket batting averages, the points for winning an ODI match are always greater than the team's rating, increasing the rating, and the points for losing an ODI match are always less than the rating, reducing the rating. A drawn match between higher and lower rated teams will benefits the lower-rated team at the expense of the higher-rated team. An "average" team that wins as often as it loses while playing a mix of stronger and weaker teams should have a rating of 100.

As of 11 September 2011, Australia lead the ICC ODI Championship with a rating of 130, while the lowest rated team, Kenya, has a rating of 0.

The championship consists of two separate ranking tables. The ten ICC Full Members that play Test cricket are automatically listed on the main table. The six Associate Members with One Day International status are listed on a secondary table, but are eligible for promotion to the main table by meeting one of the following criteria:[1]

Ireland qualified for the main table following their victories over Pakistan and Bangladesh in the 2007 World Cup,[2]. and the Netherlands qualified in 2010 by beating Bangladesh. Kenya are also listed on the main table as they previously had permanent ODI status.

The calculations for the Table are performed as follows: 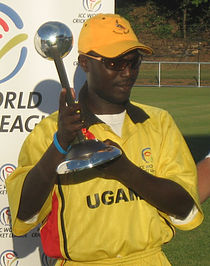 In late 2005, the International Cricket Council ranked the top non-Test nations from 11-30 to complement the Test nations' rankings in the ICC ODI Championship. The ICC used the results from the 2005 ICC Trophy and WCQS Division 2 competition (i.e. the primary qualification mechanisms for the 2007 Cricket World Cup) to rank the nations.

As of 19 April 2009 the top six associates/affiliates gained one day status. Kenya and Ireland have both qualified to appear on the main rating table, Kenya from its existing status and Ireland for its two victories in the 2007 World Cup. Following their victory over Bangladesh in July 2010, the Netherlands joined the main table. Afghanistan, Canada and Scotland remain on the secondary table. In May 2009, the ICC added a rankings table for all associate and affiliate members. This contained both global and regional placings.

The ICC provides ratings for the end of each month back to October 2002. This table lists the teams that have successively held the highest rating since that date, by whole month periods.