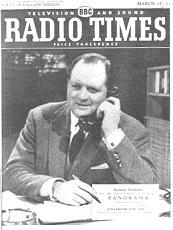 Richard Dimbleby CBE (, &ndash; , ) was an English and broadcaster widely acknowledged as one of the greatest figures in British broadcasting history.

Frederick Richard Dimbleby was born near Richmond [GRO Register of Births: SEP 1913 3a 188 BRENTFORD - Frederick R Dimbleby, mmn = Bolwell] , in the western suburbs of , the son of Gwendoline Mabel (Bolwell) and Frederick Jabez George Dimbleby, a journalist. [ [http://www.telegraph.co.uk/portal/main.jhtml?view=DETAILS&grid=A1&xml=/portal/2007/02/03/ftnick03.xml Family detective - Telegraph ] ] He was educated at in . He did not go to university. His great grandfather Jabez Bunting (J.B.) Dimbleby, born in , , was the first of the Dimbleby family to become involved in journalism. He was editor of the journal "All Past Time" "A journal devoted to the application of Astronomy to the measurement of time" and was described as the premier chronologist to the "British Chronological and Astronomical Association". He wrote a number of works on , including "The Appointed Time" (translated into Swedish and Norwegian), and the anti- "The Bible’s Astronomical Chronology versus Evolution" (1905) [ [http://www.authorandbookinfo.com/ngcoba/di.htm Di - New General Catalog of Old Books & Authors ] ] . Richard's grandfather Frederick William Dimbleby joined the "" in 1874 and bought the newspaper in 1894 after its founder, Edward King was declared insane [ [http://www.richmondandtwickenhamtimes.co.uk/aboutus/history/ Richmond and Twickenham Times: Contact Us: History of Richmond ] ] .

Richard Dimbleby began his career at "The Richmond and Twickenham Times" in 1931. He joined the as a news reporter in 1936, and in 1939, accompanied the to France. During the war, he flew some 20 raids as an observer with Bomber command, including one to Berlin, recording commentary for broadcast the following day.

In 1945, he broadcast the first reports from . [ [http://news.bbc.co.uk/1/hi/in_depth/4445811.stm BBC web page on Belsen report] ] He also was one of the first journalists to experiment with unconventional outside broadcasts, such as when flying in a fighter plane, or being submerged in a diving suit, and also describing the wrecked interior of Hitler's Reich Chancellery at the war's end.

He was a contemporary of fellow commentator who, while better known for sports commentary and light journalism, also shared the job of covering national events with him. Dimbleby was, unlike Johnston, not a traditional 'establishment' figure; he was one of the first well-known media professionals not to have attended a major public school or .

After the war Dimbleby switched to , eventually becoming the BBC's leading news commentator, and is perhaps best remembered as the commentator on a number of major public occasions. These included the coronation of Elizabeth II in 1953 and the funerals of George VI, John F. Kennedy [ [http://news.bbc.co.uk/media/audio/41098000/rm/_41098098_9476_25_11_63funeral_.ram Audio from Kennedy funeral] ] , and . He wrote a book about the coronation, "Elizabeth Our Queen", which was given free to many schoolchildren at the time.

During the same period, he was the host of the flagship current affairs series "Panorama". This programme saw him use his journalistic skills to full advantage in conducting searching, but polite interviews with key figures of the day, while acting as an urbane anchorman for the programme. He was able to maintain his reporting talents by visiting places like , standing in front of the Brandenburg Gate a week before the was erected across it by the communist authorities of .

Richard Dimbleby's reputation was built upon his ability to describe events clearly yet with a sense of the drama and poetry of the many state occasions he covered. Examples included the Lying-in-State of George VI in where he depicted the stillness of the guardsmen standing like statues at the four corners of the , or the description of the drums at Kennedy's funeral which, he said, "beat as the pulse of a man's heart." His commentary for the funeral of Churchill in January 1965 was the last state event he commentated upon.

To produce his commentaries he carried out encyclopedic research on all aspects of the venues of great events, their history and that of the ceremonies taking place, and the personalities involved. This was a necessary part of radio commentary, which transferred well to television coverage. He could also improvise extensively if there were delays in the schedule. His audience always felt that they were in "safe hands", especially in "Panorama" programmes like the one dealing with the .

Identified with the Establishment

Inevitably, because of his close association with establishment figures and royalty, some people criticised his "hushed tones" style of speaking at state occasions, claiming he was pompous. In an interview he laughed-off such attacks explaining that, even though he had to use a special microphone which covered his mouth to obviate his speaking disrupting the solemn atmosphere, he still had to pitch his voice low to avoid his voice carrying. A more common touch was demonstrated in his friendly broadcasts like "Down Your Way" where he met thousands of ordinary people in towns and villages, and the many trade unionists, politicians and industrialists etc who appeared on "Panorama" and other programmes. Dimbleby also showed stamina and imperturbability in marathon election night broadcasts which ran from 10pm when the polls closed to around 6 or 7 the following morning.

An infamous, if isolated, incident occurred had Dimbleby mildly swearing ("") while unaware the microphone was live. He had been commentating for half an hour during the 1965 state visit [ [http://www.britischebotschaft.de/statevisit/en/former_visits/visit_1965.htm Queen Elizabeth II paid an 11-day visit to the Federal Republic of Germany ] ] of HM Queen Elizabeth II to West Berlin, without knowing that the TV pictures had failed for all that time. It meant he would have to cover much ground all over again.

During his time with "Panorama" Dimbleby also reported the famous hoax on April 1, 1957, as an joke.

He was appointed an OBE in 1945 and advanced to CBE in 1959. This was one rank below Knighthood in the Order. At the time Knighthood was reserved for those who rendered service to government or retired from office in important public bodiesFact|date=January 2008, a case in point being Sir John Reith, former Director General of the BBC.

Richard Dimbleby died in , London [ [http://www.thepeerage.com/p19624.htm#i196238 thePeerage.com - Person Page 19624 ] ] , at the age of 52, from, according to , , attributed to his habit of smoking 40 a day [ [http://old.ash.org.uk/html/policy/rcp40threport.html ASH] marks 40th anniversary of the 1962 report] . However, in an interview with the , his son David reportedly said "treatment then wasn't as good as it is now, but he had which spread because he left it". [Collins, Laura [http://www.dailymail.co.uk/femail/article-1024875/The-truth-fathers-death-David-Dimbleby.html The truth about my father's death, by David Dimbleby] Mail Online - Femail, 7 June 2008, accessed 11 June 2008] Two weeks before his death, he presented a documentary on the links between heavy smoking and lung cancer. Dimbleby decided to admit he was ill with cancer, which, in those days, was a taboo disease to mention. It was helpful in building public consciousness of the disease and investing more resources in finding a cure. The was founded in his memory.

Married ["Richard Dimbleby, Broadcaster", 1975. A biography written by Jonathan Dimbleby.] to Dilys Thomas in in 1937, Dimbleby had four children, two of whom, David and Jonathan, have followed in his footsteps to become major broadcasting figures in their own right, both anchoring election night broadcasts (David on the BBC, Jonathan on ).

The was founded in his memory and is delivered every year by an influential public figure. The 2004 lecture was delivered by , ; in 2005 by Commissioner ; by General Sir Mike Jackson in 2006 and by genetics pioneer Dr J in 2007.