A heteropolymer or copolymer is a polymer derived from two (or more) monomeric species, as opposed to a homopolymer where only one monomer is used.[1] Copolymerization refers to methods used to chemically synthesize a copolymer. 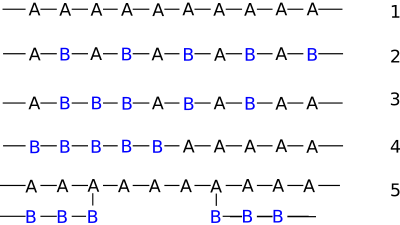 Since a copolymer consists of at least two types of constituent units (also structural units), copolymers can be classified based on how these units are arranged along the chain.[2] These include:

Other special types of branched copolymers include star copolymers, brush copolymers, and comb copolymers. In gradient copolymers the monomer composition changes gradually along the chain.

A terpolymer is a copolymer consisting of three distinct monomers. The term is derived from ter (Latin), meaning thrice, and polymer.

A special structure can be formed from one monomer where now the distinguishing feature is the tacticity of each block.

For example, suppose we perform a free-radical polymerization of styrene in the presence of polybutadiene, a synthetic rubber, which retains one reactive C=C double bond per residue. We get polystyrene chains growing out in either direction from some of the places where there were double bonds, with a one-carbon rearrangement. Or to look at it the other way around, the result is a polystyrene backbone with polybutadiene chains growing out of it in both directions. This is an interesting copolymer variant in that one of the ingredients was a polymer to begin with.

As with block copolymers, the quasi-composite product has properties of both "components". In the example cited, the rubbery chains absorb energy when the substance is hit, so it is much less brittle than ordinary polystyrene. The product is called high-impact polystyrene, or HIPS.

A special kind of copolymer is called a "block copolymer". Block copolymers are made up of blocks of different polymerized monomers.[4] For example, PS-b-PMMA is short for polystyrene-b-poly(methyl methacrylate) and is usually made by first polymerizing styrene, and then subsequently polymerizing MMA from the reactive end of the polystyrene chains. This polymer is a "diblock copolymer" because it contains two different chemical blocks. Triblocks, tetrablocks, multiblocks, etc. can also be made. Diblock copolymers are made using living polymerization techniques, such as atom transfer free radical polymerization (ATRP), reversible addition fragmentation chain transfer (RAFT), ring-opening metathesis polymerization (ROMP), and living cationic or living anionic polymerizations.[5] An emerging technique is chain shuttling polymerization. The most powerful strategy to prepare block copolymers is the chemoselective stepwise coupling between polymeric precursors and heterofunctional linking agents.[6] This method enables access to peculiarly exotic structures such as tetrablock quarterpolymers ABCD.[7]

Recent research in block copolymers suggests that they may be useful in creating self-constructing fabrics with potential utility in semiconductor arrays (for example, computer memory devices) by assembling fine details atop a structured base created using conventional microlithography methods.[8] 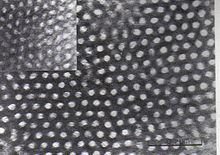 Block copolymers are interesting because they can "microphase separate" to form periodic nanostructures, as in the styrene-butadiene-styrene block copolymer shown at right. The polymer is known as Kraton and is used for shoe soles and adhesives. Owing to the microfine structure, the transmission electron microscope or TEM was needed to examine the structure. The butadiene matrix was stained with osmium tetroxide to provide contrast in the image. The material was made by living polymerization so that the blocks are almost monodisperse, so helping to create a very regular microstructure. The molecular weight of the polystyrene blocks in the main picture is 102,000; the inset picture has a molecular weight of 91,000, producing slightly smaller domains. 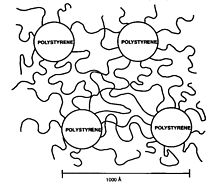 Microphase separation is a situation similar to that of oil and water. Oil and water are immiscible - they phase separate. Due to incompatibility between the blocks, block copolymers undergo a similar phase separation. Because the blocks are covalently bonded to each other, they cannot demix macroscopically as water and oil. In "microphase separation" the blocks form nanometer-sized structures. Depending on the relative lengths of each block, several morphologies can be obtained. In diblock copolymers, sufficiently different block lengths lead to nanometer-sized spheres of one block in a matrix of the second (for example PMMA in polystyrene). Using less different block lengths, a "hexagonally packed cylinder" geometry can be obtained. Blocks of similar length form layers (often called lamellae in the technical literature). Between the cylindrical and lamellar phase is the gyroid phase. The nanoscale structures created from block copolymers could potentially be used for creating devices for use in computer memory, nanoscale-templating and nanoscale separations.

An alternating copolymer has the formula: -A-B-A-B-A-B-A-B-A-B-, or -(-A-B-)n-. The molar ratios of the monomer in the polymer is close to one, which happens when the reactivity ratios r1 & r2 are close to zero, as given by the Mayo-Lewis equation also called the copolymerization equation:[9]

Copolymerization is used to modify the properties of man-made plastics to specific needs, for example to reduce crystallinity, modify glass transition temperature or to improve solubility. It is a way of improving mechanical properties, in a technique known as rubber toughening. Elastomeric phases within a rigid matrix act as crack arrestors, and so increase the energy absorption when the material is impacted for example. Acrylonitrile butadiene styrene is a common example.