A day-fine or day fine or unit fine is a unit of fine payment that, above a minimum fine, is based on the offender's daily personal income. A crime is punished with incarceration for a determined number of days, or with fines. As incarceration is a financial punishment, in the effect of preventing work, a day-fine represents one day incarcerated and without salary. It is argued to be just, because if both the high-, and low-income population are punished with the same jail time, they should also be punished with a proportionally similar income loss. An analogy may be drawn with income tax, which is also proportional to the income, even progressively. 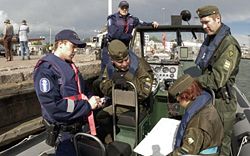 Both police and the Finnish Border Guard can make a formal demand for fining a person or order a petty fine.

In Finland, the day-fine system is used for most crimes that are punishable by way of a fine. The system has been in use since 1921.[1] Most minor infractions are punished with a fixed petty fine (rikesakko, ordningsbot) such as minor traffic and water traffic violations, littering, and breaches of public peace.[2] A petty fine is summarily ordered by the policeman if the suspect does not contest his guilt, but the person punished may contest the fine in a district court.[3]

Most infractions are punishable with a day-fine. For crimes warranting no more than six months in prison, the fine may be summarily ordered by the prosecutor, if the suspect does not want the court to handle the case. The process of ordering a day fine is started by a policeman who makes a formal demand for the suspect to be fined. The suspect has one week to contest the demand. If the suspect does not contest the demand, the prosecutor may order a fine which may not be higher than demanded by the policeman. If the suspect contests the demand, the case may be taken to the district court if the prosecutor considers the suspect guilty. If the prosecutor considers the case to merit a term in prison or a higher fine, the case is always taken to the court.[4] If the prosecution or the injured party do not demand a higher punishment than a fine, the district court has a quorum with a single member.[5] The fine is paid to the bank using a giro.[6] A fine ordered in Finland is executable in any European Union member country.[7]

A Finnish fine consists of a minimum of 1 day-fine, up to a maximum of 120 day-fines. If several crimes are punished together, 240 day-fines may be sentenced. The fines may not be sentenced together with a prison sentence, unless the prison sentence is probational. The minimum amount of a day-fine is 6 euros. Usually, the day-fine is one half of daily disposable income. The daily disposable income is considered to be one 60th part of the person's monthly mean income during the year, after taxes, social security payments and a basic living allowance of €255 per month have been deducted. In addition, every person for whose upkeep the fined person is responsible decreases the amount of daily fine by €3. The income of the person is calculated on the basis of the latest taxation data.[8][9] For speeding in traffic, however, the fine is at least as high as the petty fine, i.e. €115.[10]

The person who is punished with a fine is responsible for giving accurate information concerning their income. Lying about one's income (Finnish: sakkovilppi, Swedish: bötesfusk) is a crime punishable with a fine or up to three months in prison.[11] The police can, however, access the taxation data of Finnish citizens and permanent residents via a real-time datalink, so the chance of lying is minor. There is no maximum day-fine which may lead to considerably high fines for high-income persons. For example, in 2001, a Finnish businessman with a yearly income of 10 million euros, received a relatively mild punishment of six day-fines, amounting €26,000, for driving though a red traffic light.[12][13] In 2009 a businessman was fined €112,000 for travelling at 82 kilometres per hour in an area with a speed limit of 60 kilometres per hour.[14] As speeding is punished with a petty fine if the offender is exceeding the speed limit by up to 20 km/h, but with a day-fine if exceeding the limit by 21 km/h or more, the monetary amount of the fine can increase from €115 to over €100,000 although the actual change in speed is less than 1 km/h. This has given rise to some criticism, most vividly expressed by a Finnish member of parliament, avid motorist Klaus Bremer and other MPs of right-wing parties.[15]

The fines are subject to recovery proceedings.

Article 45 of the Penal Code (Chinese: 刑法典, Portuguese: Código Penal) specifies that a criminal fine (Chinese: 罰金, Portuguese: pena de multa) shall normally be at least 10 days and at most 360 days. One day-fine costs at least 50 Macanese patacas and at most 10,000 patacas. A court of law imposes the fine based on the economic and financial situations and personal burdens of a convict.[16]