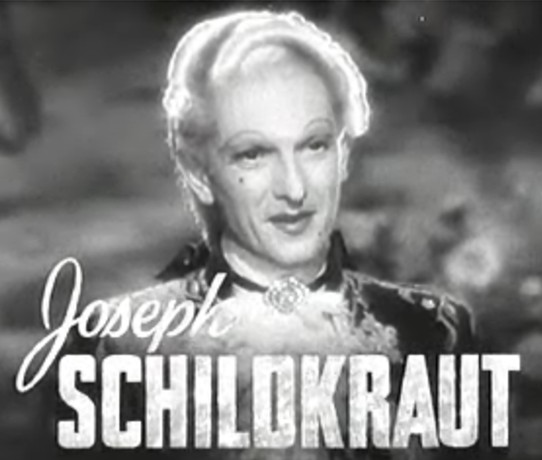 Joseph Schildkraut (, &ndash; , ) was an -winning Austrian stage and .

Born in , , Schildkraut was the son of popular stage (and later motion picture) actor Rudolf Schildkraut. The younger Schildkraut moved to the in the early 1900's. He appeared in many Broadway productions. Among the plays that he starred in was a notable production of . In 1921, he played the title role in the first American stage production of 's "", the play that would eventually become the basis for 's "Carousel". He then began working in , although he did return to the stage occasionally. He had early success in film as the Chevalier de Vaudrey in 's "" with . Later, he was featured in 's epic 1927 film "", as . Schildraut's father Rudolf also appeared in the film. Joseph Schildkraut also played a Viennese-accented, non-singing Gaylord Ravenal in the 1929 part-talkie film version of 's "Show Boat".

He received an for his role as in "" (1937). He gained further fame for playing the ambitious duc d'Orléans in the historical epic "Marie Antoinette" (1938), opposite , , and , and gave a notable performance as the villainous in "The Man in the Iron Mask" (1939). He is also remembered for playing the role of Otto Frank in "The Diary of Anne Frank" (1959). He was also an active character actor, and appeared in guest roles on several early television shows, notably the , in which he played Claudius in the 1953 television production of "", with Maurice Evans in the title role. He also appeared on two episodes of "The Twilight Zone".

Schildkraut was married three times. He died in New York, New York. For his contribution to the motion picture industry, he was awarded a star on the at 6780 Hollywood Blvd. in .