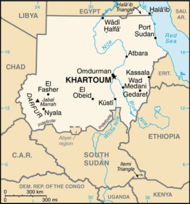 Towns in the region.

For centuries, North Kurdufan was inhabited by nomads and pastoralists, including the Yazeed tribes.[1] The area has had almost continuous drought since the mid 1960s. Deforestation led to the destruction of the natural vegetation. NGO's working in the villages of Sudan tried to rectify the damage. They set up women's centres. These centres allowed many women gain an income. Training was introduced and a solar energy system set up. NGOs recognise that a need exists for longer projects requiring the kind of support that only can come from governments and large agencies.

Cities and towns in North Kurdufan