Manchester Jewish Museum tells the story of the Jewish community in Manchester, England over the last 200 years. It occupies the former Spanish and Portuguese Synagogue on Cheetham Hill Road and is a grade II* listed building [1] 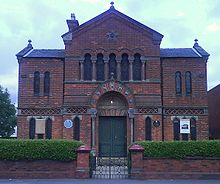 The Synagogue was completed in 1874 but later the building became redundant through the migration of the Jewish population away from the Cheetham area further North to Prestwich and Whitefield. It was re-opened as a museum in March 1984. 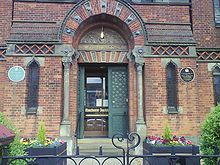 The museum building was built in the Moorish Revival style by the noted Manchester architect Edward Salomons in 1874. Although it is far from being the largest or most magnificent of the world's many Moorish revival synagogues, which include the opulent Princes Road Synagogue in nearby Liverpool, it is considered by architectural historian H.A. Meeks to be a "jewel" of a building.[2] The style, a homage to the architecture of Moorish Spain, perhaps seemed particularly fitting for the home of a Sephardic congregation. The two tiers of horseshoe windows on the facade are emblematic of the style, and the recessed doorway and arcade of five windows on the floor above the entrance are particularly decorative. Inside, a horseshoe arch frames the heichal and polychrome columns support the galleries. The mashrabiyya latticework on the front doors is particularly fine.[3]