The Dickin Medal was instituted in 1943 in the United Kingdom by Maria Dickin to honour the work of animals in war. It is a bronze medallion, bearing the words "For Gallantry" and "We Also Serve" within a laurel wreath, carried on a ribbon of striped green, dark brown and pale blue.[1] It is awarded to animals that have displayed "conspicuous gallantry or devotion to duty while serving or associated with any branch of the Armed Forces or Civil Defence Units".[1] The award is commonly referred to as "the animals' Victoria Cross".[1][2][3]

Maria Dickin was the founder of the People's Dispensary for Sick Animals (PDSA), a British veterinary charity. She established the award for any animal displaying conspicuous gallantry and devotion to duty whilst serving with British Empire armed forces or civil emergency services. The medal was awarded 54 times between 1943 and 1949, to 32 pigeons, 18 dogs, 3 horses and a cat, to acknowledge actions of gallantry or devotion during the Second World War.

The awarding of the medal was revived in 2000 to honour Gander, a Newfoundland who saved infantrymen during the Battle of Lye Mun. In early 2002, the medal was given in honour of three dogs for their role responding to the September 11 attacks; it was also awarded to two dogs serving with Commonwealth forces in Bosnia-Herzegovina and Iraq. In December 2007, 12 former recipients buried at the PDSA Animal Cemetery in Ilford, Essex, were afforded full military honours at the conclusion of a National Lottery-aided project to restore the cemetery.[4][5]

The first recipients of the award, in December 1943, were three pigeons, serving with the Royal Air Force, all of whom contributed to the recovery of air crew from ditched aircraft during the Second World War. The most recent animal to be honoured is Treo, a black Labrador, honoured for his "heroic actions as an arms and explosives search dog in Afghanistan".[2] As of August 2011, the Dickin Medal has been awarded 63 times.[1]

Rob the Collie, receiving his medal

Rip helped locate a number of victims of The Blitz. 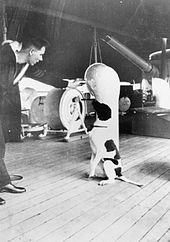 Judy was a ship's dog on both HMS Gnat and HMS Grasshopper.

William of Orange was awarded the medal in 1945 for delivering a message from Operation Market Garden.