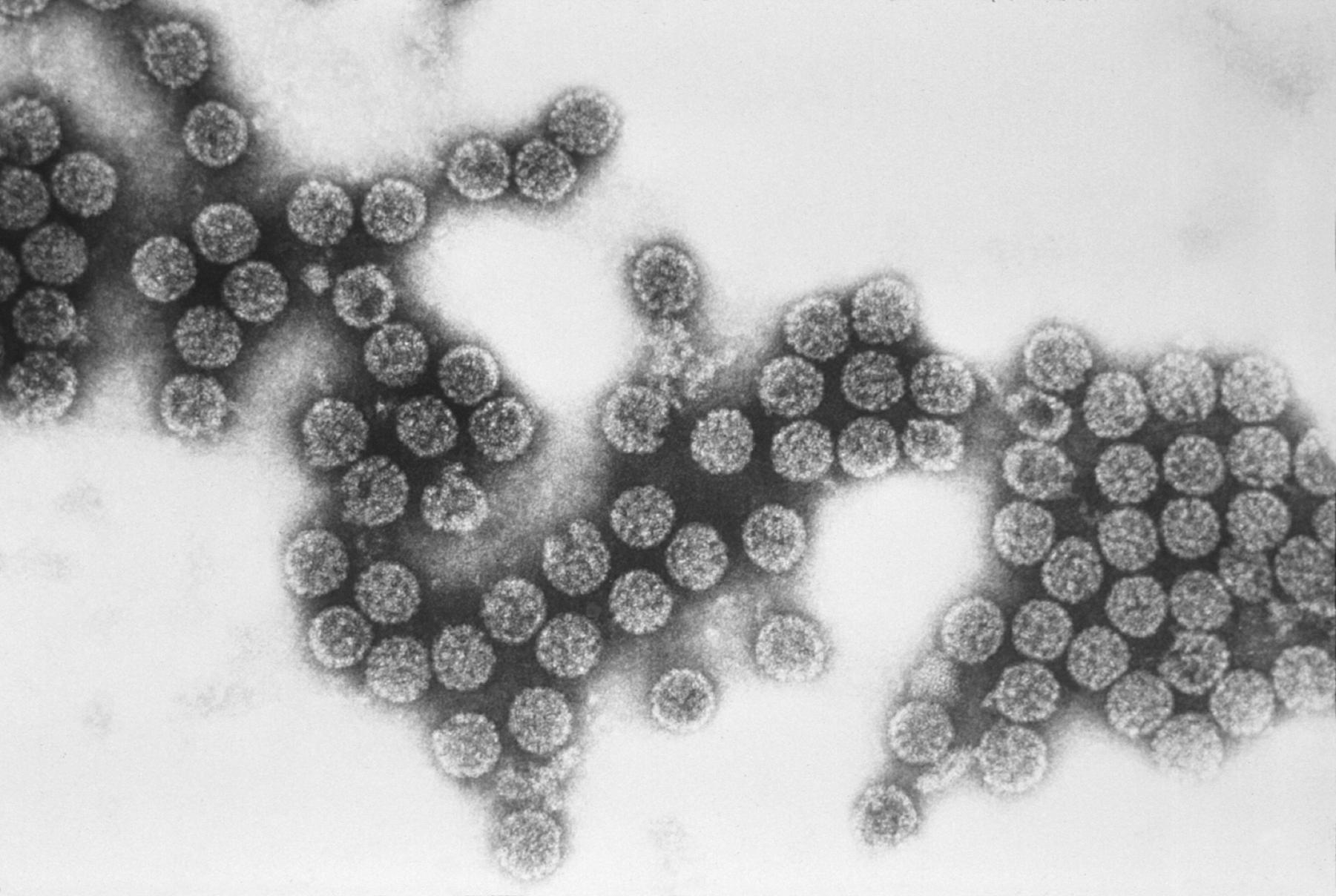 "Polyomavirus" is the sole of es within the family "Polyomaviridae". Polyomaviruses are DNA-based (double-stranded DNA,~5000 base pairs,circular genome), small (40-50 in diameter), and icosahedral in shape, and do not have a envelope. They are potentially (-causing); they often persist as latent infections in a host without causing disease, but may produce tumors in a host of a different species, or a host with an ineffective . The name "polyoma" refers to the viruses' ability to produce multiple (poly-) tumors (-oma).

Five polyomaviruses have been found in humans. can infect the , , or (sometimes causing the fatal in the latter case). produces a mild respiratory infection and can affect the kidneys of immunosuppressed transplant patients. Both of these viruses are very widespread: approximately 80 percent of the adult population in the have antibodies to BK and JC. Two recently discovered polyomaviruses, KI (Karolinska Institute)

The "" replicates in the kidneys of s without causing disease, but causes s in s. It is unknown whether it can cause disease in humans, which has caused concern since the virus may have been introduced into the general population in the 1950s through a contaminated . An avian polyomavirus sometimes referred to as the "" is a frequent cause of death among caged .

Polyomavirus virions are subsequently endocytosed and transported directly to the nucleus in endocytic s where uncoating occurs.

Polyomaviruses replicate in the nucleus of the host. They are able to utilise the host’s machinery because the genomic structure is homologous to that of the mammalian host. Viral replication occurs in two distinct phases; early and late gene expression, separated by genome replication.

"Early " is responsible for the synthesis of non-structural . Since Polyomaviruses rely on the host to control both the gene expression, the role of the non-structural proteins is to regulate the cellular mechanisms. Close to the N terminal end of polyomavirus genome are enhancer elements which induce activation and transcription of a molecule known as the T-antigen (see ). Early mRNA’s, encoding T-antigen are produced by host RNA polymerase II. T-antigen autoregulates early mRNA’s, subsequently leading to elevated levels of T-antigen. At high concentrations of T-antigen, early gene expression is repressed, triggering the late phase of viral infection to begin.

Genome replication acts to separate the early and late phase gene expression. The duplicated viral genome is synthesised and processed as if it were cellular DNA, exploiting the host’s machinery. As the daughter viral DNA are synthesised they associate with cellular to form structures that are often referred to as "minichromosomes". In this manner the DNA is packaged more efficiently.

The Polyoma large and small T-Antigen

The large T-antigen plays a key role in regulating the viral life cycle by binding to the viral origin of DNA replication where it promotes DNA synthesis. Also as the polyomavirus relies on the host cell machinery to replicate the host cell needs to be in s-phase for this to begin. Due to this, large T-antigen also modulates cellular signaling pathways to stimulate progression of the cell cycle by binding to a number of cellular control proteins [Martyn K. Whitea, Jennifer Gordona, Krzysztof Reissa, Luis Del Vallea, Sidney Croula, Antonio Giordanob, Armine Darbinyana, Kamel Khalili, Human polyomaviruses and brain tumors. Brain Research Reviews 50 (2005) 69 – 85] . This is achieved by a two prong attack of inhibiting tumor suppressing genes p53 and members of the retinoblastoma (pRB) family, and stimulating cell growth pathways by binding cellular DNA, ATPase-helicase, DNA polymerase α association, , and binding of transcription preinitiation complex factors [Kelley WL, The Tyt common exon of simian virus 40, JC, and BK polyomavirus T antigens can functionally replace the J-domain of the Escherichia coli DnaJ molecular chaperone. Biochemistry Vol. 94, pp. 3679–3684, April 1997] . This abnormal stimulation of the cell cycle is a powerful force for oncogenic transformation.

The Polyoma Middle T-Antigen is used in animal like the where it is coupled to the . There it functions as an , while the tissue where the tumor develops is determined by the MMTV promoter.

The diagnosis of polyomavirus almost always occurs after the primary infection as it is either asymptomatic or sub-clinical. The most effective way to test whether there has been a past infection is to use haemagglutination inhibition to find if there are any corresponding antibodies to the virus [Cinthia B. Drachenberg, Hans H. Hirsch , Emilio Ramos, John C. Papadimitriou, Polyomavirus disease in renal transplantation Review of pathological findings and diagnostic method, Human Pathology (2005) 36, 1245– 1255] . This however is not necessary in immunocompetent individuals as the latent polyomavirus poses no threat.

In cases of progressive multifocal leucoencephalopathy (PML) and associated tumors, where the reactivation of polyomavirus is suspected, PCR is used on a biopsy of the tissue or to amplify the polyomavirus DNA. This allows not only the detection of polyomavirus but also which sub type it is [Drews K, Bashir K, Do¨ rries K, Quantification of human polyomavirus JC in brain tissue and cerebrospinal fluid of patients with progressive multifocal leukoencephalopathy by competitive PCR, Journal of Virological Methods 84 (2000) 23–36] . ELISA-based assays for large T-Antigen and small T-Antigen are also used to detect the level of expression and thus whether reactivation has occurred [. Carbone, J. Rudzinski, M. Bocchetta, High throughput testing of the SV40 Large T antigen binding to cellular p53 identifies putative drugs for the treatment of SV40-related cancers, Virology 315 (2003) 409–414] .

There are three main diagnostic techniques used for the diagnosis of the reactivation of polyomavirus in polyomavirus nephropathy (PVN): urine cytology, quantification of the viral load in both urine and blood, and a renal biopsy [Cinthia B. Drachenberg, Hans H. Hirsch , Emilio Ramos, John C. Papadimitriou, Polyomavirus disease in renal transplantation Review of pathological findings and diagnostic method, Human Pathology (2005) 36, 1245– 1255] .The reactivation of polyomavirus in the kidneys and urinary tract causes the shedding of infected cells, virions, and/or viral proteins in the urine. This allows urine cytology to examine these cells, which if there is polyomavirus inclusion of the nucleus, is diagnostic of infection [Nickeleit V, Hirsch HH, Binet IF, et al. Polyomavirus infection of renal allograft recipients: from latent infection to manifest disease. J Am Soc Nephrol 1999;10:1080] . Also as the urine of an infected individual will contain virions and/or viral DNA, quanitation of the viral load can be done done through PCR [Randhawa PS, Vats A, Zygmunt D, et al. Quantification of viral DNA in renal allograft tissue from patients with BK virus nephropathy. Transplantation 2002;74:485- 8.] . This is also true for the blood.

Renal biopsy can also be used if the two methods just described are inconclusive or if the specific viral load for the renal tissue is desired. Similarly to the urine cytology, the renal cells are examined under light microscopy for polyomavirus inclusion of the nucleus, as well as cell lysis and viral partials in the extra cellular fluid. The viral load as before is also measure by PCR.