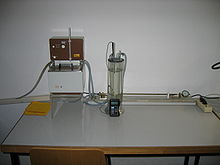 A dilatometer is a scientific instrument that measures volume changes caused by a physical or chemical process. A familiar application of a dilatometer is the mercury-in-glass thermometer, in which the change in volume of the liquid column is read from a graduated scale. Because mercury has a fairly constant rate of expansion over normal temperature ranges, the volume changes are directly related to temperature.

Dilatometers have been used in the fabrication of metallic alloys, compressed and sintered refractory compounds, glasses, ceramic products, composite materials, and plastics.[1]

Dilatometry is also used to monitor the progress of chemical reactions, particularly those displaying a substantial molar volume change (e.g., polymerisation). A specific example is the rate of phase changes.[2]

and is an important engineering parameter.

There are a number of dilatometer types:

For simpler measurements in a temperature range from 0 to 100 °C, where water is heated up and flow or over the sample. If linear coefficients of expansion of a metal is to be measured, hot water will running through a pipe made from the metal. The pipe warms up to the temperature of the water and the relative expansion can be determined as a function of the water temperature.

The expansion and retraction coefficient of gases cannot be measured using dilatometer, since the pressure plays a role here. For such measurements a gas thermometer is more suitable.