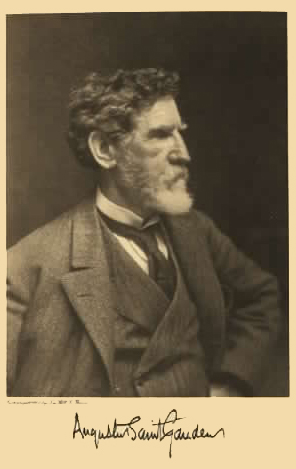 Augustus Saint-Gaudens (, , &ndash; , , ), was the Irish-born American sculptor of the Beaux-Arts generation who most embodied the ideals of the "." Raised in , he traveled to Europe for further training and artistic study, and then returned to major critical success in the design of monuments commemorating heroes of the , many of which still stand. In addition to his famous works such as the Robert Gould Shaw Memorial on Boston Common and the outstanding grand equestrian monuments to Civil War s , atop a in Chicago, 1894-97, and , at the corner of New York's , 1892-1903, Saint-Gaudens also maintained an interest in and designed the twenty-dollar "" gold piece, for the US Mint in 1905-7, still considered the most beautiful American coin ever issued [ [http://www.usmint.gov/mint_programs/american_eagles/index.cfm?flash=yes&Action=american_eagle_silver US Mint: The American Eagles Program] .] as well as the $10 "Indian Head" gold eagle, both of which were minted from 1907 until 1933. In his later years he founded the "Cornish Colony," an artistic colony that included notable painters, sculptors, writers, and architects. His brother, was also a well known sculptor with whom he occasionally collaborated.

Born in Dublin to a French father and an Irish mother, he was raised in , after his parents immigrated to America when he was six months of age. He was apprenticed to a cameo-cutter but also took art classes at the and the . At 19, his apprenticeship completed, he traveled to where he studied in the of at the . In 1870, he left Paris for , to study and , and worked on his first commissions. There he met an American art student, Augusta Homer, whom he married in 1877. In New York he was a member of the , a group of prominent artists and writers, including , and .

In 1876 he received his first major commission; a monument to Civil War , in New York's ; his friend designed an architectural setting for it, and when it was unveiled in 1881, its naturalism, its lack of bombast and its siting combined to make it a tremendous success, and Saint-Gaudens' reputation was established. in New York, 1892-1903, the first use of Robert Treat Paine’s pointing device for the accurate mechanical enlargement of sculpture models.

For the Lincoln Centennial in 1909 Saint-Gaudens produce another statue of the president. A seated figure, it is in Chicago's . (A copy was placed by Lincoln's tomb in .) The head was used for the issued on the 100th anniversary of Lincoln's birth. [ [http://www.us1909.com/367gaudens.html US 1909.com Saint-Gaudens] ]

Saint-Gaudens also created the monument on 's . In 1887, when made his second trip to the United States, Saint-Gaudens had the opportunity to make the preliminary sketches for a five-year project of a medallion depicting Stevenson, in very poor health at the time, propped in bed writing. With minor modifications, this medallion was reproduced for the Stevenson memorial in , . Stevenson's cousin and biographer, Graham Balfour, deemed the work "the most satisfactory of all the portraits of Stevenson." Balfour also noted that Saint-Gaudens greatly admired Stevenson and had once said he would "gladly go a thousand miles for the sake of a sitting" with him. [2] A statue of philanthropist Robert Randall stands in the gardens of in New York. A statue of Copper King, Marcus Daly, is at the entrance of The Montana School of Mines on the west end of Park St. in Butte Montana.

His prominence brought him students, and he was an able and sensitive teacher. He tutored young s privately, taught at the , and took on a large number of assistants. He was an artistic advisor to the of 1893, an avid supporter of the , and part of the , which brought into being L'Enfant's long-ignored master-plan for the nation's capital.

Through his career Augustus Saint-Gaudens' made a specialty of intimate private portrait panels in sensitive, very low relief, which owed something to the Florentine .

He referred to his early relief portraits as "medallions" and took a great interest in the art of the coin: his twenty-dollar gold piece, the coin he designed for the US Mint, 1905-7, though it was adapted for minting, is still considered the most beautiful American coin ever issued.

Chosen by to redesign the coinage of the nation at the beginning of the 20th century, Saint-Gaudens produced a beautiful high-relief $20 gold piece that was adapted into a flattened-down version by the . The high-relief coin took up to eleven strikes to bring up the details, and only 12,367 of these coins were minted in 1907.

The Saint-Gaudens obverse design was reused in the American Eagle gold bullion coins that were instituted in 1986. An "ultra-high relief" $20 (pure) gold coin will be issued by the U.S. Mint in 2009. [ [http://www.usmint.gov/pressroom/index.cfm?action=press_release&ID=914 UNITED STATES MINT TO PROVIDE A GOLDEN MOMENT AT WORLD'S FAIR OF MONEY® IN BALTIMORE] ]

Diagnosed with cancer in 1900, he decided to live at his Federal house with barn-studio set in the handsome gardens he had made, where he and his family had been spending summers since 1885, in Cornish, New Hampshire&mdash; though not in retirement; despite diminishing energy, he continued to work, producing a steady stream of reliefs and public sculpture. In 1904, he was one of the first seven chosen for membership in the . That same year the large studio burned, with the irreplaceable loss of the sculptor's correspondence, his sketch books, and many works in progress.

At , Saint-Gaudens and his brother Louis attracted a summer colony of artists. The most famous included painters , and , architect and garden designer Charles Platt, and sculptor . The colony of artists made for a dynamic social and creative environment, at the center of which stood Augustus Saint-Gaudens. Many other well known artists followed Saint-Gaudens to Cornish, forming what became known as the "Cornish Colony." Included were painters , , George Deforest Brush and Kenyon Cox, dramatist Percy MacKaye, the American novelist Winston Churchill, architect, , and sculptors and , Augustus' brother. After his death in 1907 it slowly disspiated. His house and gardens is now preserved as .

His life-size sculpture representing the was unfinished at his death, but as of|1995|lc=on is undergoing restoration at the National Historic Site.

Among the public collections holding works by Augustus Saint-Gaudens are the following:

Saint-Gaudens appeared on a 1940 U.S. in the Famous Americans series.