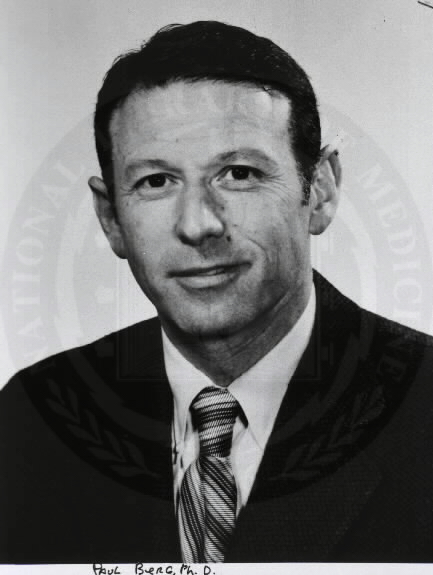 Paul Naim Berg (born , in , , U.S.) is an American and at . He graduated from Abraham Lincoln High School in 1943, received his B.S. in biochemistry from in 1948 and Ph.D. in biochemistry from in 1952. In 1980 he shared half of the with the team of and . All three were recognized for their important contributions to basic research in s. His studies as a postgraduate involved the use of radioisotope tracers in intermediary metabolism. This resulted in the understanding of how foodstuffs are converted to cellular materials, through the use of isotopic carbons or heavy nitrogen atoms. Paul Berg's doctorate paper is now known as the conversion of , and to fully reduced states of methyl groups in . He was also one of the first to demonstrate that folic acid and B12 cofactors had roles in the processes mentioned.

Berg is Professor Emeritus at Stanford and ceased conducting research in 2000 [ [http://med.stanford.edu/profiles/Paul_Berg/ Faculty & Researcher Profiles - Stanford University Medical Center ] ] . He is also currently the Chairman of Whitehead Institute Board of Advisory Scientists at the [http://nobelprize.org/nobel_prizes/chemistry/laureates/1980/berg-cv.html] .

Prof. Berg is a member of the Board of Sponsors of The [http://www.thebulletin.org] . He was also an organizer of the in 1975. The previous year, Berg and other scientists had called for a voluntary on certain research until they could evaluate the risks. That influential conference did evaluate the potential hazards and set guidelines for biotechnology research. It can be seen as an early application of the .