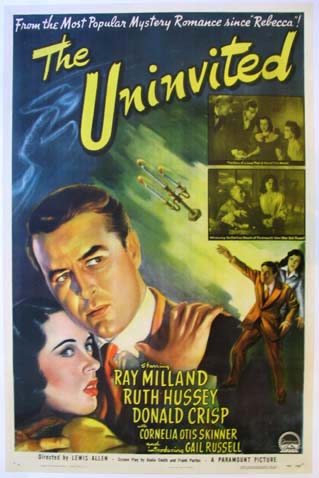 "The Uninvited" is a 1944 American mystery/romance film directed by Lewis Allen. It is based on the novel "Uneasy Freehold".

It was nominated for a 1945 Academy Award for Best Black and White Cinematography for 's camerawork.

London music critic Roderick "Rick" Fitzgerald () and his sister Pamela () discover a handsome, abandoned seaside house during a holiday in . They purchase the property, called Windward House, for an unusually low price from its original owner, the imposing Commander Beech (). During the transaction they meet Beech’s 20-year-old granddaughter Stella Meredith (), who lives with her grandfather in the nearby town. Stella is initially upset by the sale of Windward because of her fond memories of growing up there, despite it being the location of her mother’s tragic death when she was three. Her nostalgia over the house is discouraged by the Commander, who has forbidden Stella to enter. However, against Beech’s wishes, she gains access to Windward House through Rick, who has become infatuated with her.

Rick and Pamela’s initial enchantment with the house diminishes when they begin to experience unexplained phenomena: cold spots, mysteriously wilting flowers, and the heartbreaking sobs and moans of an unseen woman. It becomes obvious that the house is haunted.

Rick invites Stella to Windward for dinner, and she soon becomes aware of the spirit. Rather than fearing it, she senses a calming presence that she associates with her mother, as well as a strong scent of -- her mother's favorite perfume. Suddenly Stella becomes weary and cold. -like, she runs from the house toward the cliff and the rocky seas below. Rick grabs her just before she falls. Something in the house is trying to kill her. Upon returning to the house, they hear a scream from the live-in housekeeper, Lizzie Flynn (). She has seen a ghostly apparition, and in short order decides to find a new residence (although remaining in the Fitzgeralds' employ).

The reasons for the haunting and how they relate to Stella prove to be a complex mystery. The strange occurrences are investigated by the Fitzgeralds along with the town physician, Dr. Scott (), whom they've befriended. In exploring the history of the family, they are told that Stella's father, a painter, had had an affair with his artist's model -- a Spanish girl named Carmel. Stella's mother Mary Meredith, from all accounts a proud, vivacious and flamboyant woman, found out about the infidelity and took Carmel to Paris, leaving her there. Carmel eventually came back, stole the infant Stella and, during a confrontation, flung Mary Meredith off the nearby cliff to her death. Shortly afterward, Carmel herself became ill and died.

Rick, Pamela and Dr. Scott conspire to dissuade Stella from her dangerous obsession with Windward by staging a fake . By using a makeshift board, they attempt to convey that Stella’s mother wants her daughter to stay away from the house. Suddenly the real ghost takes over the proceedings, communicating that it is guarding Stella, presumably from the ghost of Carmel. Stella abruptly becomes possessed and starts speaking Portuguese. The séance is interrupted by Commander Beech, who removes Stella and secretly arranges for her to be sent to a . The facility in question, The Mary Meredith Retreat, is run by a Miss Holloway (), Mary Meredith's former nurse and confidante. Holloway worships her former employer's memory with an obsession that borders on insanity.

The Fitzgeralds travel by train to the sanitarium to talk to Holloway, not knowing that Stella is there. Holloway tells them that after the death of her employer she took care of Carmel, who had contracted pneumonia and eventually died of the illness. The Fitzgeralds return home with little new information. Rifling through old journals from the previous village physician, Dr. Scott discovers that Carmel was murdered by Miss Holloway. The doctor is then called away to care for an ailing Commander Beech, who tells him that Stella is at the sanitarium. The group decides to go free Stella. They telephone Holloway and tell her that they are on their way.

At the Meredith Retreat, knowing the trio is en route, Holloway tells Stella that the Fitzgeralds have invited her to live with them to be closer to the spirit of her mother. She happily takes the train home, not knowing Holloway's motive is to send Stella alone to a malevolent spirit.

The trio arrives at the sanitarium only to find a deranged Holloway, who tells them that Stella is on her way to Windward House. They rush back home, but are twenty minutes behind the train. Stella arrives at the house to find her grandfather there. Ailing and weakened, he tries to get her to leave, but she remains. As a ghostly presence appears, the Commander succumbs to a .

Stella approaches the ghost, convinced it is the protective spirit of her mother. But something about the apparition makes her scream with fright, and she flees again towards the cliffs. The trio arrives just in the nick of time to save her.

Inside the house, they are drawn again to the physician's journal found by Dr. Scott. They discover that before her murder at the hands of Miss Holloway, Carmel gave birth to a child. Stella's mother is actually Carmel, who had returned from Paris to retrieve her daughter. The scent of mimosa and the ghostly sobs have been emanating from Carmel all along. Upon discovering this, Stella feels that the spirit of her true mother is free, and has left the house.

Something evil, though, has remained. They flee the house -- all but Rick. He goes to confront the spirit of Stella's would-be mother, Mary Meredith, telling her that they are no longer afraid of her and that she has no power over them any more. The spirit then departs and the house is calm.

* ’s lush, romantic score produced a popular hit, "", based on the film’s main theme. "Stella by Starlight" has been recorded numerous times as an [ Rolling Stone [http://www.rollingstone.com/search?query=%22stella+by+starlight%22&type=&search=Search ] ] by such artists as greats , and , and as a vocal (with lyrics by ) by singers , , , , and many others.

* The filmmakers initially did not intend to show any ghosts in the film, but Paramount’s unease resulted in the insertion of several ghost shots in post-production. According to the , the ghost’s facial features were modeled by actress and physical form by model and bit player Lynda Grey. Russell also posed for the large portrait of "Mary Meredith" that is seen on the wall of Miss Holloway’s office in the film.