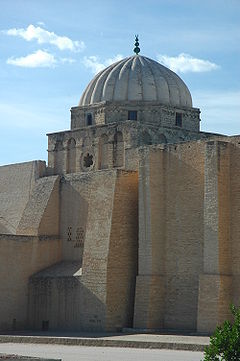 Dome in architecture : ribbed hemispherical dome resting on an octagonal drum in the Great Mosque of Kairouan (also called the Mosque of Uqba), city of Kairouan, Tunisia.

A dome is a structural element of architecture that resembles the hollow upper half of a sphere.

Dome may refer to: