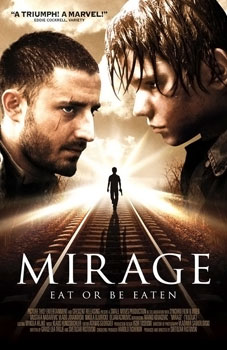 "Iluzija" ( _mk. Илузија; English: "Mirage") is a 2004 Macedonian starring , , , and , with Marko Kovacevic debuting in its lead role. It was directed by Svetozar Ristovski, who co-wrote the film with Grace Lea Troje. Taking place in the city of Veles, the film is a coming-of-age story about a talented but abused schoolboy who is betrayed by illusory hopes of a better future and transformed by harsh circumstances into a criminal. It offers a grim depiction of post-independence Macedonia, portraying it as a site of violence and corruption. "Iluzija" was Ristovski's feature debut as a director. Following its release in and the , it was well-received by most critics, who have generally praised the film for its uncompromising realism and lead actor's performance. It won Best Feature Film during the 2005 Anchorage International Film Festival and was nominated for the Tokyo Grand Prix during the 2004 .

The film takes place in Veles during the 's post-independence years. It tells the story of 13-year-old Marko Trifunovski (Marko Kovacevic), a talented but abused Macedonian schoolboy whose harsh circumstances gradually transform him into a criminal. Two mentors offer Marko hopes of a better future, but they eventually fail him, leading to his catastrophic change. The illusory nature of these hopes is foreshadowed by the film's epigraph, an aphorism from 's "": "Hope is the worst of evils, for it prolongs the torments of man." [A different translation of this Nietzsche quote is available at [http://en.wikiquote.org/wiki/Human%2C_All_Too_Human Wikiquote] as Aphorism 71. URL retrieved May 2008. ] The film opens with Marko's difficult circumstances. Living in a run-down house beside a railway track, he suffers neglect from his family. They consist of his father Lazo (), a drunkard addicted to bingo and involved in a workers' strike; his cowed, unsupportive mother Angja (Elena Mosevska); and his promiscuous, abusive sister Fanny (Slavica Manaskova). At school, Marko suffers torment from bullies led by Levi (Martin Jovchevski), son of the Albanian police chief Blashko (Dejan Acimovic). To escape his troubles, Marko often takes refuge in a local train graveyard, playing chess to pass time. A sensitive boy, Marko has a talent for composing poetry; a character half-jokingly refers to him as " II". A Bosnian teacher of Macedonian () becomes Marko's mentor. He encourages Marko to take part in a French-sponsored poetry contest whose winners will represent Macedonia in , as well as to recite his entry during their school's upcoming Independence Day celebrations. He fills Marko with hopes of escaping his hometown through literary achievement to Paris, the "city of art". However, Marko's efforts gain only indifference from his family and mockery from school bullies. Although a kind man, his teacher offers little help. He flees when he witnesses Levi's gang beating up Marko outside his own apartment, and his attempts to banish Levi from his classes fail because of Blashko's intervention. Furthermore, Fanny begins an affair with a black soldier, providing Marko's racist bullies with more fuel. Meanwhile, a scarred soldier () has taken up residence in the train graveyard. He plays chess with Marko, replacing a missing pawn with a bullet. Coincidentally, his name turns out to be Paris, the city of Marko's hopes. Paris becomes Marko's new mentor, teaching the boy to fend for himself: "Eat or be eaten." He promises to take Marko away from his hometown in the future. Under Paris' influence, Marko begins to drink, smoke, and steal. They commit several burglaries to fund their future journey, including one of a local Orthodox church. Marko is eventually caught peddling stolen perfumes. Taken into police custody, he is blackmailed by Blashko into becoming Levi's tutor. Levi in turn blackmails Marko into joining his gang for a school break-in, threatening him with his father's gun. Meanwhile, Marko's teacher subjects his poetry to severe criticism, devastating the boy. At his wits' end, Marko begs Paris to teach him how to shoot a gun. Dismissive at first, Paris finally agrees. At night, Levi's gang and Marko break into school. They vandalize its main office, setting student records on fire and locking Marko inside the burning room. Scarred in the face by a broken bottle and recognized by the night watchman, Marko escapes and seeks refuge in the train graveyard. There, he discovers that Paris has abandoned him, leaving behind his pawn bullet. Summoned by the principal to account for the vandalism, Marko refuses to denounce Levi's gang. He is condemned as a delinquent and expelled from school. Marko's teacher offers him no help, instead reporting him for alcohol and tobacco abuse. He replaces Marko with fellow classmate Jasmina (Marija Sikalovska) for their Independence Day poetry recital, ghostwriting a patriotic poem for her. Confronting Levi's gang, Marko takes away Levi's gun by force and loads it with Paris' bullet. Armed, he confronts his teacher during their school's Independence Day celebrations and denounces him for betraying his hopes. "There is no escape from the sewer," he concludes, shooting his teacher point-blank. As the boy staggers away, the film lingers on a of his teacher's corpse, closing to the strains of 's "Gnossienne No. 3". [ Peter L'Official identifies the Satie music in [http://www.villagevoice.com/film/0611,lofficial,72542,20.html his "Village Voice" review.] For corroboration, midi files of the Satie music are available at [http://www.kunstderfuge.com/satie.htm Kunst der Fuge.] URLs retrieved May 2008. ]

In order given by the film's credits:

Svetozar Ristovski intended the film to be a coming-of-age story about a boy's transition from childhood to adolescence in contemporary Macedonia. [Hanrahan interview, 0:50-1:49.] As part of this coming-of-age process, the protagonist Marko spends much of the film searching for paternal figures such as Paris and his teacher to compensate for his father's inadequacies and become alternative role models for him. [Hanrahan interview, 7:22-8:40.] The mysterious Paris, in particular, functions as a wish-fulfilment "mirage" for Marko. [Hanrahan interview, 16:10-16:55.] endemic in such conditions, [Hanrahan interview, 9:28-11:43.] while his failed hopes serve as a cautionary warning against the dangers of empty idealism in such situations. One critic saw Paris' bullet in Marko's chess set ("see figure on the right") as a metaphor for the threat of violence ever-present in their world. during Macedonia's post-independence years. [Hanrahan interview, 18:37-18:51.] Ristovski saw Marko's story as a dramatization of that predicament: " [Many people] see these trains that are going up and down, but they can't get on any of those trains. They can't really get out of their place, their country, their town." [Hanrahan interview, 18:51-19:07.] One critic saw Marko's train graveyard ("see figure on the left") as a metaphor for the hopelessness of his particular story: "there are tracks everywhere but no hope of transport."

"Iluzija" was Svetozar Ristovski's first attempt at directing a feature film; his prior work included the short film "Hunter" (2000) and the documentary "Joy of Life" (2001). [ cite web
title = EastWest Film Distribution: Svetozar Ristovski
url = http://www.eastwest-distribution.com/director_ristovski.htm
accessdate = May 2008 ] [ cite web
title = Macedonian Cinema Information Center: Ristevski Svetozar
url = http://www.maccinema.com/e_avtor_detali.asp?idsorabotnik=631
accessdate = May 2008 ] According to a 2006 WKCR interview, his idea for the project came in the form of visual imagery for the film's final shot ("see figure on the right"), which served as a focal point towards which he worked out the rest of the film's events. [ Hanrahan interview, 19:59-21:38.] Ristovski collaborated with Grace Lea Troje on the script. He credited his Canadian-born colleague with providing the film an "international" perspective and giving its story a more "universal" dimension, [Hanrahan interview, 22:20-23:11.] thus steering it away from . According to "Variety", 's "" (1962) was an important influence on the co-writers. The casting director for the film was Nikola Hejko, [ cite web
title = IMDB: Nikola Hejko
url = http://www.imdb.com/name/nm0374793
accessdate = June 2008 ] who was chosen primarily for his prior work with juvenile actors in movies such as "" (1996) and "" (2004). Hejko's tasks for the project included finding actors for the film's juvenile roles with the help of his assistant Maja Mladenovska. According to Ristovski, this involved searching various Macedonian schools for potential actors, [ Hanrahan interview, 3:03-3:40.] as well as months of test shooting and selection narrowing. [ Hanrahan interview, 3:03-3:53.] The film's adult roles were largely filled by actors from Macedonia and other countries. In various interviews, Ristovski cited several difficulties in producing the film. According to a 2005 interview, the project met with disapproval from the Macedonian government during .

The film was shot on location in Veles during May and June 2003.

In the United States, the film opened in a single theatre on , and grossed $1,511 during its one week of screening.

The film was well-received by most film critics. In , it earned a "Fresh" rating of 82% based on 11 reviews, with an 86% "Cream of the Crop" designation based on 7 reviews. [ cite web
title = Rotten Tomatoes: "Mirage"
url = http://www.rottentomatoes.com/m/mirage
accessdate = May 2008 ] In , the film earned a generally favourable metascore of 61% based on 8 reviews. [ cite web
title = Metacritic: "Mirage"
url = http://www.metacritic.com/film/titles/mirage?q=Mirage
accessdate = May 2008 ] In general, critics have praised the film for its uncompromising realism. After its Toronto premiere, "Variety" lauded the film as "a modest triumph of fearless acting and pointed social commentary".