As a volunteer, an Auxiliarist is not paid a salary and participates in activities at her or his own discretion. Auxiliarists may be reimbursed for expenses incurred when they are under orders from the Commandant. Unlike the active duty and reserve components of the USCG, Auxiliarists are not subject to the Uniform Code of Military Justice.

Auxiliarists who own a boat, aircraft or radio station (amateur or marine band VHF sets) often use their equipment (i.e., "vessels") on behalf of the USCG and are reimbursed for expenses incurred while under mission orders, although membership does not require ownership of a vessel. An Auxiliarist can also serve on a USCG asset once they have obtained proper training. When under orders, the member is recognized as a Federal employee and any approved vessels are recognized as property of the U.S. government. Members use previously-acquired skills and skills obtained via approved training. Examples of previously-acquired skills include carpentry, cooking, radio repair, engine repair, and maintenance, as well as professional skills such as medical, legal and computer skills.

The basic requirements to become a member of the Auxiliary are

A background fingerprint check and citizenship verification is performed by the USCG of all new members, which is done to conduct a criminal background check and confirm identity before the USCG approves membership. An approved member is provided with an identification card that identifies that individual as an employee of the United States Department of Homeland Security, under which the USCG is a component. 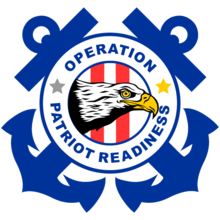 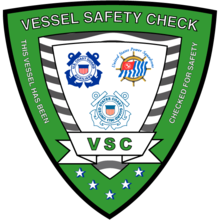 Historically, the primary missions of the Auxiliary have been providing free vessel "safety checks," boater education and supplementing other USCG operations. The Auxiliary's four cornerstones are Member Services, Operations and Marine Safety, Recreational Boating Safety and Fellowship (the "glue" which holds the Auxiliary's missions and its members together).

Auxiliarists can be found on the nation's waterways, in the air, in classrooms and on the dock, performing maritime domain awareness patrols, safety patrols, vessel safety checks and public education. Additionally, the Auxiliary performs behind the scenes missions in support of USCG operations. Annually, members donate millions of hours in support of USCG missions.

Current programs in which Auxiliary members are authorized to participate include, but are not limited to:

The Auxiliary shares the Coast Guard's core values, which are Honor, Respect, and Devotion to Duty.[2] The motto of the USCG, including the Auxiliary, is "Semper Paratus"[3] (Always Ready).

Relationship to the military

Historically, the USCG has supported and encouraged the involvement of the Auxiliary in the Coast Guard's missions. Both the current Commandant (ADM Robert J. Papp, Jr.) and Vice Commandant (VADM David Pekoske), as well as the former Vice Commandant (VADM Vivien Crea) have publicly stated their support of the Auxiliary,[4] and in fact, the Coast Guard relied heavily on Auxiliary direct and indirect support during hurricanes Katrina and Rita.[5] On September 13, 2006, Thad Allen issued a new Auxiliary Policy Statement,[6] which states that "Fittingly, the core strategic purpose of the Auxiliary is to continuously hone its expertise to perform three prioritized functions:

It also states that:

"Every commander, commanding officer, officer-in-charge, and program manager shall work closely with their Auxiliary counterparts to fully leverage the resources, skills, qualifications, and profound dedication that reside within the Coast Guard Auxiliary. Such focused collaboration is essential to our unwavering commitment to mission excellence in serving and protecting the public trust."

While Auxiliarists wear military style rank insignia to signify office held, they do not use military titles.[9] For example, a Flotilla Commander wears insignia similar to a USCG lieutenant, but is never referred to as "Lieutenant." The title most commonly used in official correspondence and reports is "Auxiliarist", and its abbreviation (e.g., Auxiliarist John Smith or AUX J. Smith).[9] Exceptions to this rule are elected or appointed Commodores, who wear one to three stars depending on their office, and are the only Auxiliarists who use a military style title ("Commodore") before their name.[9]

Auxiliarists do not normally render military courtesies (such as saluting) to another Auxiliarist, but an Auxiliarist in uniform is expected to initiate salutes to the U.S. national ensign and friendly foreign flags as well as military officers who are senior in grade. Auxiliarists are also expected to return all salutes given.

Auxiliarists are expected to wear a uniform intended for the situation and mission.[11] Each auxiliary uniform is identical to a Coast Guard officer's military uniform, with the exception that the buttons and stripes on dress jackets and shoulder boards are silver in color, rather than gold. On dress uniforms, appointed staff officers wear insignia with a red "A" and elected officers wear insignia with a blue "A", while black "A"s are worn on insignia by both elected and appointed officers on the ODU uniform. Auxiliarists are expected to adhere to the same rules of correct uniform wear as regular and reserve Coast Guard officers.

When augmenting Coast Guard personnel, the military-style insignia of Auxiliary position is generally removed and the organizational insignia is worn.

The basic organization of the Auxiliary is:

As a civilian organization, the Auxiliary does not have a military-style chain of command. There are, however, three chains of leadership and management. Auxiliarists are expected to adhere to the relevant chain when communicating. There is an elected leader chain and an appointed leader chain (known as "parallel staffing"). Members appointed to the National Staff (see DIR, DVC, BC and BA below) have another chain to which they report. The leaders and vice (deputies) of each flotilla, division and district are elected annually. The national leadership is elected once every two years. Other staff officers are appointed based on skills and level of interest. However, the Auxiliary, because of its close work with the other components of the Coast Guard, inherited the meme of staff officer abbreviations, and these are used extensively in internal documents and reports. All leadership positions in the Auxiliary require membership in a Flotilla of the Auxiliary.

The regular national officer positions are:

Titles and duties of flotilla officers are dictated by the Auxiliary Manual.[20]

The list of staff officers, with their official abbreviations, is:

On May 25, 2006, President George W. Bush presented the Presidential Unit Citation to the U.S. Coast Guard for meritorious achievement and outstanding performance in action from August 29, 2005 to September 13, 2005, in preparation for, and response and recovery to devastation wrought by Hurricane Katrina.[23] This award applies to all components of the Coast Guard (i.e., active, reserve, auxiliary, and civilians) since the response to Katrina was an all hands effort. 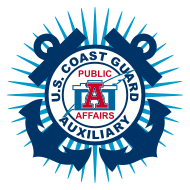 Auxiliarists are involved in many missions, all over the globe. The Auxiliary's Department of Public Affairs[25] issues News Releases[26] on many of the accomplishments of the Auxiliary, as well as manages the Internal Communications to the Auxiliary through SITREP,[27] its online E-zine, and Navigator,[28] its quarterly magazine. They also produce magazine articles for reprint in any venue on the AuxGuidanceSkills.info web site.[29]

On the community level, the Department of Public Affairs runs the Fleet Home Town News (FHTN) program[30] for the Coast Guard. The FHTN program dates back to World War II. It is a program designed to increase national awareness of the activities of sailors, Marines and Coast Guardsmen through written stories and documented images about them and their personal achievements in their hometown news media.

The Auxiliary also run the Coastie program.[31] Coastie is an animated robotic cartoon character. He has navigation and searchlights, a rotating beacon, a siren, an air horn, and eyes and eyelids that move meaningfully. He talks, plays music, and interacts with the instructor and the children during the presentation. He even has a bilge pump that pumps water like a real boat; that always brings smiles and laughter to all when used. Coastie also has his own built in squirt gun that kids love. Coastie is 44 inches long, 30 inches wide, 45 inches tall and weighs about 120 pounds. He is painted bright blue and has decals promoting Boating and Water Safety from many boating safety organizations. He flies five colorful flags: the United States Ensign, Coast Guard Operational Flag, Coast Guard Auxiliary Ensign, and the Flag of the State of Ohio, along with a flag denoting boating safety on one side and water safety on the other. He has his own infrared remote CD player to improve his music selection capability.

The History Division[32] is charged with maintaining historical documents and a chronological history of the Auxiliary since its inception in 1939. 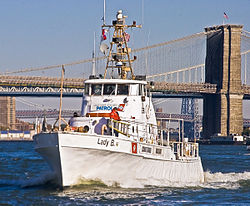 On any given day, on average, Auxiliarists throughout the United States will do the following:[33]