Obsessive love is a state in which one person feels an overwhelming obsessive desire to possess another person toward whom they feel a strong sexual attraction, with an inability to accept failure or rejection. Although not categorized under any specific mental diagnosis by the DSM IV, the problem is believed by many to be a mental illness that may be related to obsessive-compulsive disorder. Obsessive lovers may feel entirely unable to prevent themselves from extreme behaviors such as stalking, rape, and other acts of violence toward themselves, their target, or others. They may be entirely convinced that their feelings are love, and may reject the idea that their severe obsession is not love. 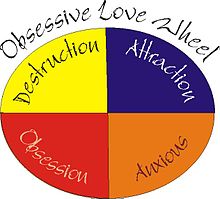 The "Obsessive Love Wheel" (OLW) is a hypothetical sphere originally described by Dr. John D. Moore in his book, Confusing Love with Obsession. The wheel illustrates the four stages of Obsessive Relational Progression as part of Relational Dependency (RD). Moore suggests that for people who are afflicted with relational dependency (love addiction, codependency, etc.) their relationships often follow the pattern of the wheel.

The initial phase of ORP is characterized by an instantaneous and overwhelming attraction to another person. It is at this point the relationally dependent person becomes dependant on a romantic interest, usually resulting from the slightest bit of attention from the person they are attracted to.

This phase is considered a relational turning point, which usually occurs after a commitment has been made between both parties. Sometimes, however, the relationally dependent person will enter into this phase without the presence of a commitment. The relation can be severed here, resulting in a depressing time for the controlling party. If not severed by this time, psychological help will be required. This happens when the afflicted person creates the illusion of intimacy, regardless of the other person's true feelings. The second phase of ORP behaviors can include :

This particular phase represents the rapid escalation of this unhealthy attachment style. It is at this point that obsessive, controlling behaviors reach critical mass, ultimately overwhelming the RD person's life. Also at this point that the person being controlled begins to pull back and, ultimately, severs the relationship. In short, Phase Three is characterized by a total loss of control on the part of the RD person, resulting from extreme anxiety. Usually, the following characteristics are apparent during the third phase of ORP.

This is the final phase of Obsessive Relational Progression. It represents the destruction of the relationship, due to phase three behaviors, which have caused a love interest to understandably flee. For a variety of reasons, this is considered the most dangerous of the four phases, because the RD person suddenly plummets into a deep depression due to the collapse of the relationship. Here are some of the more common behaviors that are exhibited during phase four of ORP: