MTS is one of the oldest transit systems in Southern California Dating Back as early as the 1880s, although the d/b/a names have changed over the years the two modes of transportation, buses and light rail, have remained consistent over the past 125 years.

MTS is a joint powers authority agency, or JPA. Member cities include San Diego, Chula Vista, Coronado, El Cajon, Imperial Beach, La Mesa, Lemon Grove, National City, Poway, Santee, and the county of San Diego. Elected officials from each jurisdiction, including San Diego County, serve as the Board of Directors. The city of San Diego has the most representation with four members. A county resident is elected by the Board of Directors to serve as the Chairman.

Vintage San Diego Transit Logo, used prior to the adoption of the system's unified MTS logo. The Logo was used both on bus stops and buses themselves.

MTS has begun providing their route schedules to Google and this has spawned a new generation of trip planners such as TransitTrips. 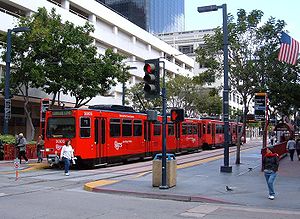 Light rail service is operated by the San Diego Trolley, Incorporated (SDTI). It is commonly referred to as "The Trolley". Four lines are operated and are designated by the colors Blue, Orange, Green, and Silver. Special Event service is also operated for large events occurring at Qualcomm Stadium, Petco Park and the San Diego Convention Center via a special event Red Line.

Light rail service provided by MTS is among the most utilized systems in terms of patronage in the United States. Over 100,000 typically ride the Trolley each weekday.

Five commuter express fixed-route bus routes (Routes 810, 820, 850, 860, and 870) are operated Monday through Friday linking suburban areas to the north and east with downtown San Diego and Kearny Mesa. Each route runs inbound to downtown San Diego or Kearny Mesa during the morning commute period and outbound in the afternoon commute period. Over-the-road Greyhound style vehicles are used for these Commuter Express Services.

Five express fixed-route bus routes (Routes 20, 50, 150, 210, and 960) are operated along major roadways and highways and link intermediate distant suburban areas to the San Diego urban area. Two of the five routes only operate during the morning and evening commute periods. Vehicles used for service are typically standard 40-foot buses or 60-foot articulated buses.

Urban bus routes link the densely populated neighborhoods and adjacent cities together with direct and frequent bus service. These services constitute the bulk of fixed-route bus services operated in terms of vehicle requirements and patronage. Typically, headways are 12–15 minutes between scheduled bus arrival/departure times during commute periods and during midday times. Generally, no worse than 30-minute headways occur during non-commute periods and weekends. Local routes generally have stops placed every block or every other block. Limited routes have stops placed every approximately quarter to half mile. Major arterial roads in the City Heights and North Park area of San Diego have both types of routes available, providing for more frequent service. Articulated buses are used during the summer on weekends on route 30 to provide extra access to the beaches. Route 7 utilizes articulated buses along University Ave due to it being the busiest bus route in San Diego.[3]

Local routes and Shuttle services are also operated by MTS. These typically operate less frequently or have a shorter range.

Paratransit services, operated under the name "MTS Access" provide point-to-point service upon request to passengers registered with MTS as being qualified for assistance under the Americans with Disabilities Act. Service is available throughout the MTS service area, and connections to a similar NCTD service are also available.

Vehicles are 16-passenger van conversions equipped with wheelchair lifts and tiedowns. 12 of the 16 seats are collapsible, allowing space for up to 4 wheelchairs. Fares are $4.50 each way, though passengers are allowed to bring one companion (as a PCA, or Personal Care Assistant) free of charge. Additional fare-paying companions are also permitted.

Although the cash fare increase was modest, $0.25, the elimination of free 2-hour Transfer Passes was controversial.[citation needed] This impacted infrequent cash fare paying riders using multiple bus routes to complete their trip the most because each boarding requires the full fare be paid. As a response, MTS encouraged riders to purchase a $5 Daily Pass for access on the whole system as it is approximately the same cost as the total would be for a round trip utilizing a single bus for each direction and paying the single ride fare each time. Or, to consider purchasing a $64 Monthly Pass.

Effective January 1, 2009, MTS set fares for the San Diego Trolley at $1.25 for up to two hours within downtown San Diego, and $2.50 for all other one-way trolley service. Seniors (ages 60 and over), people with disabilities and Medicare cardholders pay 60 cents and $1.25 respectively. Further, the Monthly Pass increased from $64 to $68, with the youth pass at $34 and seniors/disabled/Medicare pass at $17. While the adult Premium Monthly Pass (including travel on $5 premium express buses) remained at $90, new $45 youth and $22.50 senior/disabled/Medicare premium monthly passes were introduced.[5]

Effective July 1, 2009, MTS eliminated the downtown zone fare category for the San Diego Trolley. As a result, the regular passenger fare for all one-way trips on the trolley became $2.50 regardless of origin or destination point; seniors, people with disabilities, and Medicare cardholders pay just $1.25 each. MTS also increased the passenger fare for shuttle bus routes to $2.25 ($1.10 senior/disabled/Medicare). All other single-ride cash fares remain unchanged. The cost of an ordinary 1-day pass also remained at $5, but the cost of a 1-day RegionPlus pass increased from $11 to $14. MTS also increased the prices of all monthly passes (e.g. from $68 to $72 for a regular 30-day adult pass) and began selling 14-day passes, which replace the half-month passes.[6]

No passes are accepted by MTS Access paratransit buses; however, prepaid tickets are available in books of 10.

Effective May 1, 2010, MTS passes will only be available on the Compass Card, which is a smart chip enabled transit card.

San Diego and Arizona Eastern Railway is a division of MTS; however does not operate public transit service. Instead, the division manages and leases the tracks for freight service to two freight operators.