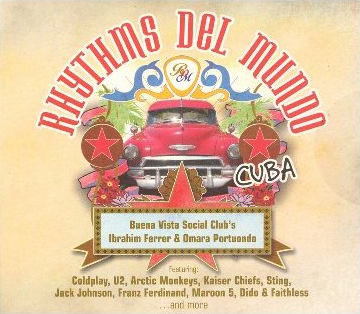 "Rhythms del Mundo" is a nonprofit collaborative album, which fuses an all-star cast of Cuban musicians including and of the with tracks from US, UK and Irish artists such as , , , Jack Johnson, , , Franz Ferdinand, and others.

, Founder and Trustee of APE, explains how the project emerged: "The project was sparked off by the devastating . The idea came in to do a project with The to fuse their Latin sounds with Western artists and their familiar popular songs. The project evolved when more environmental disasters struck -- the Asian Earthquakes and . But the big picture was climate change. You can call these natural disasters but after all the research and scientific data, we know that we're at least partly to blame for some of these disasters. Global warming is now in the news daily. If we don't act in the time frame our experts give us, our grandchildren will curse us eternally."

comments, "We need a law, we need to have the Government put climate change in its place. If you leave industry to sort it out on a voluntary basis that's never going to happen. So everybody, if they've got any concerns about climate, change has to register that concern with their Government officials because it's the only way to go."

Album proceeds benefits the environmental nonprofit organization , which raises awareness and funds for climate change projects and for disaster relief efforts . The artists on this album fully support the record as a commitment to the music and to the cause that it endorses.

The main recording sessions took place in at Abdala Studios from April 2005 to June 2006 and Mixed at Lazy Moon Studios (UK). While the majority of the vocals remain the same, the musicians of the reworked the original orchestration from each song and created something utterly unique, casting their trademark mastery over each track. "Rhythms Del Mundo" includes restructured tracks such as "Clocks" by , "Better Together" by Jack Johnson, "She Will Be Loved" by , "High and Dry" by , "Dancing Shoes" by and "Modern Way" by , as well as other popular songs.

"Rhythms Del Mundo" also includes music by famed Cuban singers and the last vocal recording of Afro-Cuban bolero singer, , who passed away in 2005. The other Cuban musicians from The who perform on this album are as follows: Barbarito Torres, Amandito Valdes, Virgilio Valdes, Angel Terri Domech, Manuel 'Guajiro' Mirabal, and .This project is the brainchild and concept of and the Berman Brothers. They produced the 16 new original recordings on the CD.

AMG rates "Rhythms del Mundo: Cuba" with 4.5 out of 5 stars and goes on to praise the flawless musicianship, the inspired arrangements and also the timeless quality of some of the tracks [cite web
publisher = All Media Guide
title = Rhythms del Mundo: Cuba
url=http://allmusic.com/cg/amg.dll?p=amg&sql=10:28jieaw94xa7
accessdate = 2006-12-30 ] .