Social liberalism is the belief that liberalism should include social justice. It differs from classical liberalism in that it believes the legitimate role of the state includes addressing economic and social issues such as unemployment, health care, and education while simultaneously expanding civil rights. Under social liberalism, the good of the community is viewed as harmonious with the freedom of the individual.[1] Social liberal policies have been widely adopted in much of the capitalist world, particularly following World War II.[2] Social liberal ideas and parties tend to be considered centrist or centre-left.[3][4][5][6][7]

A reaction against social liberalism in the late twentieth century, often called neoliberalism, led to monetarist economic policies and a reduction in government provision of services. However, this reaction did not result in a return to classical liberalism, as governments continued to provide social services and retained control over economic policy.[8]

By the end of the nineteenth century, the principles of classical liberalism were challenged by downturns in economic growth, a growing perception of the evils of poverty, unemployment and relative deprivation present within modern industrial cities, and the agitation of organized labour. The ideal of the self-made individual, who through hard work and talent could make his or her place in the world, seemed increasingly implausible. A major political reaction against the changes introduced by industrialization and laissez-faire capitalism came from conservatives concerned about social balance, although socialism later became a more important force for change and reform. Some Victorian writers—including Charles Dickens, Thomas Carlyle, and Matthew Arnold—became early influential critics of social injustice.[11]

John Stuart Mill contributed enormously to liberal thought by combining elements of classical liberalism with what eventually became known as the new liberalism. The new liberals tried to adapt the old language of liberalism to confront these difficult circumstances, which they believed could only be resolved through a broader and more interventionist conception of the state. An equal right to liberty could not be established merely by ensuring that individuals did not physically interfere with each other, or merely by having laws that were impartially formulated and applied. More positive and proactive measures were required to ensure that every individual would have an equal chance of success.[12]

In the late nineteenth century and early twentieth century, a group of British thinkers, known as the New Liberals, made a case against laissez-faire classical liberalism and argued in favor of state intervention in social, economic, and cultural life. The New Liberals, which included intellectuals like T.H. Green, L.T. Hobhouse, and John A. Hobson, saw individual liberty as something achievable only under favorable social and economic circumstances.[3] In their view, the poverty, squalor, and ignorance in which many people lived made it impossible for freedom and individuality to flourish. New Liberals believed that these conditions could be ameliorated only through collective action coordinated by a strong, welfare-oriented, and interventionist state.[13]

Ultimately, the Liberal governments of Henry Campbell-Bannerman and H.H. Asquith, especially thanks to Chancellor of the Exchequer and later Prime Minister, David Lloyd George, established the foundations of the welfare state in the UK before the First World War. The comprehensive welfare state built in the UK after the Second World War, although largely accomplished by the Labour Party, was significantly designed by two Liberals—John Maynard Keynes, who laid the economic foundations, and William Beveridge, who designed the welfare system.[3]

In late nineteenth century Germany, left-liberals established trade unions in order to help workers improve working and economic conditions. Leading left-liberals, such as Lujo Brentano, established the Social Policy Association in 1873 to promote social reform. The main objectives of the left-liberals were free speech, freedom of assembly, free trade, representative government, equal and secret suffrage, and protection of private property, although they were strongly opposed to the welfare state, which they called State Socialism. Friedrich Naumann, who was an Association member, later established the National Social Union, which attempted to combine bourgeois nationalism with proletarian socialism. The new group advocated, among other things, increased social welfare legislation, the right to strike, and profit-sharing in industry. Although the party was unable to win any seats and soon dissolved, the theories it developed would remain influential in German liberalism.

While some writers describe Germany's left-liberalism as social liberalism, others only apply the term to the policies of the National Social Union. The main left-liberal parties in Germany were the German Progress Party during the German Empire and the German Democratic Party during the Weimar Republic. The Free Democratic Party represents liberalism in modern Germany. The term left-liberal contrasted these parties with the more conservative liberals, in particular the right-wing of the National Liberal Party, which allied itself with the Conservatives.[14][15][16]

In France, social liberal theory was developed in the Third Republic by solidarist thinkers, including Alfred Fouillée and Émile Durkheim, who were inspired by sociology and influenced radical politicians like Léon Bourgeois. They explained that a greater division of labor caused greater opportunity and individualism, but it also inspired a more complex interdependence. They argued that the individual had a debt to society, promoting progressive taxation to support public works and welfare schemes. However, they wanted the state to coordinate rather than to manage, and they encouraged cooperative insurance schemes among individuals. Their main objective was to remove barriers to social mobility rather than create a welfare state.[17]

In the 1870s and the 1880s, the American economists Richard Ely, John Bates Clark, and Henry Carter Adams—influenced both by socialism and the Evangelical Protestant movement—castigated the conditions caused by industrial factories and expressed sympathy towards labor unions. None, however, developed a systematic political philosophy, and they later abandoned their flirtations with socialist thinking. In 1883, Lester Frank Ward published the two-volume Dynamic Sociology and formalized the basic tenets of social liberalism while at the same time attacking the laissez-faire policies advocated by Herbert Spencer and William Graham Sumner. The historian Henry Steele Commager ranked Ward alongside William James, John Dewey, and Oliver Wendell Holmes and called him the father of the modern welfare state.[18] Writing from 1884 until the 1930s, John Dewey—an educator influenced by Hobhouse, Green, and Ward—advocated socialist methods to achieve liberal goals. Some social liberal ideas were later incorporated into the New Deal,[19] which developed as a response to the Great Depression.

The welfare state grew gradually and unevenly from the late nineteenth century, but became fully developed following the Second World War, along with the mixed market economy. Also called "embedded liberalism", social liberal policies gained broad support across the political spectrum, because they reduced the disruptive and polarizing tendencies in society, without challenging the capitalist economic system. Business accepted social liberalism in the face of widespread dissatisfaction with the boom and bust cycle of the earlier economic system, and because it seemed to them to be a lesser evil than more left-wing modes of government. Social liberalism was characterized by cooperation between big business, government and labor unions. Government was able to assume a strong role because its power had been strengthened by the wartime economy. However the extent to which this occurred varied considerably among Western democracies.[20] 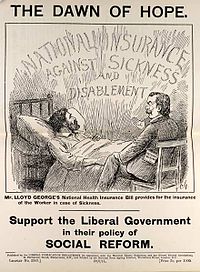 British leaflet from the Liberal Party expressing support for the National Health Insurance Act of 1911. The legislation provided benefits to sick and unemployed workers, marking a major milestone in the development of social welfare.

The first notable implementation of social liberal policies occurred under the Liberal Party in Britain from 1906 until 1914. These initiatives became known as the Liberal reforms. The main elements included pensions for poor elderly people, health, sickness, and unemployment insurance based on earlier programs in Germany, and the establishment of labour exchanges. These changes were accompanied by progressive taxation, particularly in the People's Budget of 1909. The old system of charity—relying on the Poor laws and supplemented by private charity, public co-operatives, and private insurance companies—was in crisis, giving the state added impetus for reform. The Liberal Party caucus elected in 1906 also contained more professionals, including academics and journalists, sympathetic to social liberalism. The large business owners had mostly deserted the Liberals for the Conservatives, the latter becoming the favorite party for commercial interests. The reforms were regularly opposed by both business interests and trade unions. Liberals most identified with these reforms were the prime minister H. H. Asquith, John Maynard Keynes, David Lloyd George (especially as Chancellor of the Exchequer), Winston Churchill (as President of the Board of Trade) in addition to the civil servant William Beveridge.[21]

Alexander Ruestow, a German economist, first proposed the German version of economic social liberalism. In 1932, speaking at the Social Policy Association, he applied the label "neoliberalism" to this kind of social liberalism, although that term now features a different meaning than the one mentioned by Ruestow. Ruestow wanted an alternative to socialism and to the conservative economics developed in the German Empire. In 1938, Ruestow met with a variety of economic thinkers—including the likes of Ludwig von Mises, Friedrich von Hayek, and William Roepke—to determine how liberalism could be renewed. Ruestow advocated a strong state to enforce free markets and state intervention to correct market failures. However, Mises argued that monopolies and cartels operated because of state intervention and protectionism, and claimed that the only legitimate role for the state was to abolish barriers to market entry. He viewed Ruestow's proposals as negating market freedom and saw them as similar to socialism.[22]

Following the Second World War, "neoliberalism", now usually called ordoliberalism or the Social Market Economy, was adopted by the West German government under Ludwig Erhard, who was the economics minister and later became the Chancellor. Price controls were lifted and free markets were introduced. While these policies are credited with Germany's post-war economic recovery, the welfare state, which had been established under Bismarck, became increasingly costly.[22]

The post-war governments of other countries in Western Europe also followed social liberal policies. These policies were implemented primarily by Christian Democrats and Social Democrats, as liberal parties in Europe declined in strength from their peak in the nineteenth century.[23]

American political discourse resisted this social turn in European liberalism. While the economic policies of the New Deal appeared Keynesian, there was no revision of liberal theory in favor of greater state initiative. America lacked an effective socialist movement, however, New Deal policies often appeared radical and were attacked by the right. The separate development of modern liberalism in the United States is often attributed to American exceptionalism, which kept mainstream American ideology within a narrow range.[24]

Following economic problems in the 1970s, social liberal thought underwent some transformation. Keynesian economic management was seen as interfering with the free market while increased welfare spending that had been funded by higher taxes prompted fears of lower investment, lower consumer spending, and the creation of a "dependency culture." Trade unions often caused high wages and industrial disruption, while full employment was regarded as unsustainable. Writers such as Milton Friedman and Samuel Brittan, who were influenced by Friedrich Hayek, advocated a reversal of social liberalism. Their policies, which are often called neoliberalism, had a significant influence on Western politics, most notably on the governments of UK Prime Minister Margaret Thatcher and US President Ronald Reagan, who pursued policies of deregulation of the economy and reduction in spending on social services.[8]

Part of the reason for the collapse of the social liberal coalition was a challenge in the 1970s from financial interests that could operate independently of national governments. Another cause was the decline of organized labor which had formed part of the coalition but was also a support for left-wing ideologies challenging the liberal consensus. Related to this was the decline of working class consciousness and the growth of the middle class. The push by the United States, which had been least accepting of social liberalism, for trade liberalization further eroded support.[25]

This list presents some notable scholars and politicians who are generally considered as having made significant contributions to the evolution of social liberalism as a political ideology: