This article is about the railway constructed by Japan during World War II. For articles relating to the railways of the country Burma, see Rail transport in Burma. 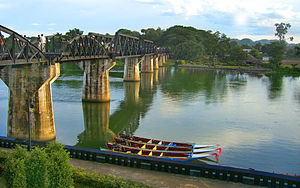 The Bridge over the Mae Klong River; the railway is along the northeastern side of the Kwae Noi River.

The Burma Railway, also known as the Death Railway, the Thailand–Burma Railway and similar names, is a 415 kilometres (258 mi) railway between Bangkok, Thailand, and Rangoon, Burma (now Yangon, Myanmar), built by the Empire of Japan during World War II, to support its forces in the Burma campaign.

Forced labour was used in its construction. About 180,000 Asian labourers and 60,000 Allied prisoners of war (POWs) worked on the railway. Of these, around 90,000 Asian labourers (mainly romusha) and 16,000 Allied POWs died as a direct result of the project. The dead POWs included 6,318 British personnel, 2,815 Australians, 2,490 Dutch, about 356 Americans and a smaller number of Canadians and New Zealanders.[1] 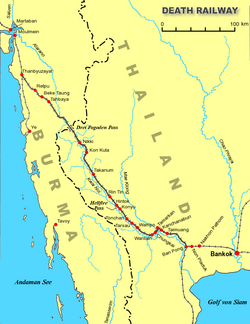 Map of the Burma Railway

A railway route between Thailand and Burma had been surveyed by the British government of Burma at the beginning of the 20th century, but the proposed course of the line – through hilly jungle terrain divided by many rivers – was considered too difficult to complete.

In 1942, Japanese forces invaded Burma from Thailand and seized the colony from British control. To maintain their forces in Burma, the Japanese were required to bring supplies and troops to Burma by sea, through the Strait of Malacca and the Andaman Sea. This route was vulnerable to attack by Allied submarines, and a different means of transport was needed. The obvious alternative was a railway. The Japanese forces started the project in June 1942.

They intended to connect Ban Pong in Thailand with Thanbyuzayat in Burma, through the Three Pagodas Pass. Construction began at the Thai end on 22 June 1942, and in Burma at roughly the same date. Most of the construction materials, including tracks and sleepers, were brought from dismantled branches of the Federated Malay States Railway network and from the Netherlands East Indies.

On 17 October 1943, the two sections of the line met about 18 km (11 mi) south of the Three Pagodas Pass at Konkuita (Kaeng Khoi Tha, Sangkhla Buri district, Kanchanaburi Province). Most of the POWs were then transported to Japan. Those left to maintain the line still suffered from appalling living conditions as well as increasing Allied air raids.

The most famous portion of the railway is Bridge 277, 'the bridge over the River Kwai', which was built over a stretch of river which was then known as part of the Mae Klong. The association with the 'River Kwai' came from the fact that the greater part of the Thai part of the route followed the valley of the Khwae Noi, 'Kwai' being the Thai word for Water Buffalo. In 1960, because of this discrepancy between fact and fiction, the part of the Mae Klong which passes under the famous bridge was renamed as the Khwae Yai (Thai แควใหญ่, English "big tributary").

This bridge was immortalized by Pierre Boulle in his book and the film based on it, The Bridge on the River Kwai. However, there are many who claim that the movie is utterly unrealistic and does not show what the conditions and treatment of prisoners was actually like.[2] The first wooden bridge over the Khwae Yai was finished in February 1943, followed by a concrete and steel bridge in June 1943. According to Hellfire Tours in Thailand, "The two bridges were successfully bombed on 13 February 1945 by the Royal Air Force. Repairs were carried out by POW labour and by April the wooden trestle bridge was back in operation. On 3 April a second raid by Liberator bombers of the U.S. Army Air Forces damaged the wooden bridge once again. Repair work continued and both bridges were operational again by the end of May. A second raid by the R.A.F. on 24 June put the railway out of commission for the rest of the war. After the Japanese surrender, the British Army removed 3.9 kilometers of track on the Thai-Burma border. A survey of the track had shown that its poor construction would not support commercial traffic. The track was sold to Thai Railways and the 130 km Ban Pong–Namtok section relaid and is in use today."[3]

Hellfire Pass was a particularly difficult section of the line to build due to it being the largest rock cutting on the railway, coupled with its general remoteness and the lack of proper construction tools during building. The Australian, British, Dutch, other allied prisoners of war, along with Chinese, Malays and Tamils labourers, were required by the Japanese to complete the cutting. 69 men were beaten to death by Japanese and Korean guards in the six weeks it took to build the cutting, and many more died from cholera, dysentery, starvation, and exhaustion (Wigmore 568).[4]

After the war the railway was in very poor condition and needed heavy reconstruction for use by the Royal Thai Railway system. On 24 June 1949, the portion from Kanchanaburi to Nong Pladuk (Thai หนองปลาดุก) was finished; on 1 April 1952, the next section up to Wang Pho (Wangpo) was done. Finally, on 1 July 1958 the rail line was completed to Nam Tok (Thai น้ำตก, English Sai Yok "waterfalls".) The portion in use today measures some 130 km (81 mi). The line was abandoned beyond Nam Tok Sai Yok Noi. The steel rails were salvaged for reuse in expanding the Bangsue railway yard, reinforcing the BKK-Banphachi double track, rehabilitating the track from Thung Song to Trang, and constructing both the Nong Pladuk-Suphanburi and Ban Thung Pho-Khirirat Nikhom branch lines. Parts of abandoned route have been converted into a walking trail.

Since the 1990s various proposals have been made to rebuild the complete railway, but these plans have not yet come to fruition. Since a large part of the original railway line is now submerged by the Vajiralongkorn Dam, and the surrounding terrain is mountainous, it would take extensive tunneling to reconnect Thailand with Burma by rail.

The living and working conditions on the Burma Railway were horrific. The estimated total number of civilian labourers and POWs who died during construction varies considerably, but the Australian Government figures suggest that of the 330,000 people that worked on the line (including 250,000 Asian labourers and 61,000 Allied POWs) about 90,000 of the labourers and about 16,000 Allied prisoners died. See external link below. 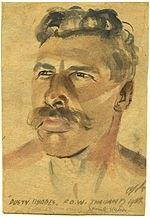 Portrait of POW "Dusty" Rhodes. A three-minute sketch by Old painted in Thailand in 1944.

Life in the POW camps was recorded at great risk to themselves by artists such as Jack Bridger Chalker, Philip Meninsky, John Mennie, Ashley George Old and Ronald Searle. Human hair was often used for brushes, plant juices and blood for paint, and toilet paper as the 'canvas'. Some of their works were used as evidence in the trials of Japanese war criminals. Many are now held by the Australian War Memorial, State Library of Victoria and the Imperial War Museum in London.

But the horrors, starvation, sickness, and death that occurred during the construction of the Thailand-Burma railway are not the whole story. Except for the worst months of the construction period, known as the "Speedo" (mid-spring to mid-October 1943), one of the ways the Allied POWs kept their spirits going in the hellish conditions was to ask one of the musicians in their midst to play his guitar or accordion for them, or lead them in a group singalong, or request their camp comedians to tell some rough jokes, or put on a skit.

After the railway was completed, the POWs still had almost two years to survive before their liberation. During this time, most of the POWs were moved to hospital and relocation camps where they could be available for maintenance crews or sent to Japan to alleviate the manpower shortage there. It was in these camps that entertainment flourished as an essential part of their rehabilitation. Theatres out of bamboo and atap (palm fronds) were built, set, lighting, costumes and makeup devised, and an array of entertainment produced that included music halls, variety shows, cabarets, plays, and musical comedies – even pantomimes. These activities engaged numerous POWs as actors, singers, musicians, designers, technicians, and female impersonators.

POWs and Asian workers were also used to build the Kra Isthmus Railway from Chumphon to Kra Buri, and the Sumatra or Palembang Railway from Pakanbaroe to Moeara.

The construction of the Burma Railway is counted as a war crime committed by Japan in Asia. Hiroshi Abe, the first lieutenant who supervised construction of the railway at Sonkrai where over 3,000 POWs died, was later sentenced to death as a B/C class war criminal. His sentence was later commuted to 15 years in prison.

After the war, the remains of most of the war dead were moved from former POW camps burial grounds and solitary sites along the rail line to one of three war cemeteries. The exception was fallen Americans, who were repatriated to the United States. (A total of 902 American POWs worked on the railway – 534 men from the 131st Field Artillery Regiment and 368 survivors of the sunken USS Houston (CA-30); 133 of them died.)

The main POW cemetery is in the city of Kanchanaburi, where 6,982 POWs are buried, mostly British, Australian, Dutch and Canadians. Also at the main cemetery is the Kanchanaburi Memorial, which honours 11 Indian soldiers from British regiments who were buried in local Muslim cemeteries. A smaller cemetery just outside the city is Chung Kai, with 1,750 war graves. Thanbyuzayat in Myanmar has the graves of 3,617 POWs (3,149 Commonwealth and 621 Dutch) who died on the Burmese portion of the line. The three cemeteries there are maintained by the Commonwealth War Graves Commission.

Several museums are dedicated to those who perished building the railway. The largest of these is at Hellfire Pass (north of the current terminus at Nam Tok), a cutting where the greatest number of lives were lost. An Australian memorial is at Hellfire Pass. Two other museums are in Kanchanaburi – the Thailand-Burma Railway Museum, opened in March 2003, and the JEATH War Museum. There is a memorial plaque at the Kwae bridge itself and an historic wartime steam locomotive is on display.

A preserved section of line has been rebuilt at the National Memorial Arboretum in England.

Along the Death Railway today, River Khwae on the left

Some Significant Bridges along the line