3D modeling
This article is about computer modeling within an artistic medium. For scientific usage, see Computer simulation.

In 3D computer graphics, 3D modeling (also known as meshing) is the process of developing a mathematical representation of any three-dimensional surface of object (either inanimate or living) via specialized software. The product is called a 3D model. It can be displayed as a two-dimensional image through a process called 3D rendering or used in a computer simulation of physical phenomena. The model can also be physically created using 3D printing devices.

Models may be created automatically or manually. The manual modeling process of preparing geometric data for 3D computer graphics is similar to plastic arts such as sculpting.

3D models represent a 3D object using a collection of points in 3D space, connected by various geometric entities such as triangles, lines, curved surfaces, etc. Being a collection of data (points and other information), 3D models can be created by hand, algorithmically (procedural modeling), or scanned.

3D models are widely used anywhere in 3D graphics. Actually, their use predates the widespread use of 3D graphics on personal computers. Many computer games used pre-rendered images of 3D models as sprites before computers could render them in real-time.

A modern render of the iconic Utah teapot model developed by Martin Newell (1975). The Utah teapot is one of the most common models used in 3D graphics education.

Almost all 3D models can be divided into two categories.

Because the appearance of an object depends largely on the exterior of the object, boundary representations are common in computer graphics. Two dimensional surfaces are a good analogy for the objects used in graphics, though quite often these objects are non-manifold. Since surfaces are not finite, a discrete digital approximation is required: polygonal meshes (and to a lesser extent subdivision surfaces) are by far the most common representation, although point-based representations have been gaining some popularity in recent years. Level sets are a useful representation for deforming surfaces which undergo many topological changes such as fluids.

The process of transforming representations of objects, such as the middle point coordinate of a sphere and a point on its circumference into a polygon representation of a sphere, is called tessellation. This step is used in polygon-based rendering, where objects are broken down from abstract representations ("primitives") such as spheres, cones etc., to so-called meshes, which are nets of interconnected triangles. Meshes of triangles (instead of e.g. squares) are popular as they have proven to be easy to render using scanline rendering.[2] Polygon representations are not used in all rendering techniques, and in these cases the tessellation step is not included in the transition from abstract representation to rendered scene.

In 3D modeling there are recurring concepts which usually appear as abbreviations. Here are some of the most current:

CW, center of window, in reference to the visualization window. 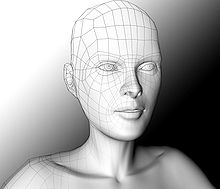 There are Three popular ways to represent a model:

The modeling stage consists of shaping individual objects that are later used in the scene. There are a number of modeling techniques, including:

Modeling can be performed by means of a dedicated program (e.g., form•Z, Maya, 3DS Max, Blender, Lightwave, Modo, solidThinking) or an application component (Shaper, Lofter in 3DS Max) or some scene description language (as in POV-Ray). In some cases, there is no strict distinction between these phases; in such cases modeling is just part of the scene creation process (this is the case, for example, with Caligari trueSpace and Realsoft 3D).

Complex materials such as blowing sand, clouds, and liquid sprays are modeled with particle systems, and are a mass of 3D coordinates which have either points, polygons, texture splats, or sprites assigned to them. 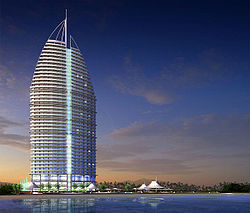 A fully textured and lit rendering of a 3D model.

3D photorealistic effects are often achieved without wireframe modeling and are sometimes indistinguishable in the final form. Some graphic art software includes filters that can be applied to 2D vector graphics or 2D raster graphics on transparent layers.

Advantages of wireframe 3D modeling over exclusively 2D methods include:

3CT (3D Catalog Technology) has revolutionized the 3D model market by offering quality 3D model libraries free of charge for professionals using various CAD programs. Some believe that this uprising technology is gradually eroding the traditional "buy and sell" or "object for object exchange" markets although the quality of the products do not match those sold on specialized 3d marketplaces.

A large market for 3D models (as well as 3D-related content, such as textures, scripts, etc.) still exists - either for individual models or large collections. Online marketplaces for 3D content, such as TurboSquid, allow individual artists to sell content that they have created. Often, the artists' goal is to get additional value out of assets they have previously created for projects. By doing so, artists can earn more money out of their old content, and companies can save money by buying pre-made models instead of paying an employee to create one from scratch. These marketplaces typically split the sale between themselves and the artist that created the asset, often in a roughly 50-50 split. In most cases, the artist retains ownership of the 3d model; the customer only buys the right to use and present the model. [3]

3D printing is a form of additive manufacturing technology where a three dimensional object is created by laying down successive layers of material.

The first widely available commercial application of human Virtual Models appeared in 1998 on the Lands' End web site. The human Virtual Models were created by the company My Virtual Model Inc. and enabled users to create a model of themselves and try on 3D clothing. There are several modern programs that allow for the creation of virtual human models (Poser being one example).