This audio file was created from a revision of Adelaide Metro dated 2011-07-26, and does not reflect subsequent edits to the article. (Audio help)
More spoken articles

Adelaide Metro is the public transport system of the South Australian capital of Adelaide and the brand name of the Public Transport Division of the Department of Planning, Transport and Infrastructure. It is an intermodal system with services provided by bus, tram or commuter rail throughout the metropolitan area. The services, although contracted to four separate operators, are fully integrated under Adelaide Metro and share a universal ticketing system, marketing, and common livery and signage.

The Adelaide Metro is a brand introduced in 2000 following the tender privatisation of bus services.[1] Previously, the public transport system in Adelaide has been known under several names. From 1994 until well into 2002 the name for this South Australian State Government department was the Passenger Transport Board. Before 1994, the system was operated by the State Transport Authority. Closer to the middle of the twentieth century, the Municipal Tramways Trust was the public transport authority in Adelaide, South Australia. Adelaide removed all tramlines during the 1960s leaving only the Glenelg line. This tramline has been since extended during 2007 by the Department Of Transport, Energy & Infrastructure (DTEI). Please see http://www.adelaidemetro.com.au for further historical information regarding the Glenelg tramline extension during 2007. 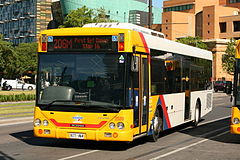 The largest element of Adelaide's public transport system is a fleet of diesel and natural gas powered buses. The majority of services terminate at the city-centre or at a suburban rail station or shopping centre interchange. As contracts are revised for privatised bus operations, more cross suburban routes are added to the network, whereas in the past bus routes were largely focused on moving passengers from the suburbs to the CBD. Most cross-suburban routes that pass through the CBD, including those using main north and main south roads, do not indicate that they are going beyond the CBD (it is not shown at stops, on timetables or on the buses themselves). The driver changes the bus number and route before entering the city centre without informing passengers, and often results in confusion when people get off of a bus, especially if the altered bus route is the one to which they needed to transfer. Adelaide Metro buses get priority on a few roads and intersections, with dedicated bus lanes and bus only signal phases at some traffic lights.

The Adelaide Metro buses are operated by:

The Adelaide suburban railway network is operated by Department Of Planning, Transport Infrastructure (South Australia)(Public Transport Services Division),but trades under the Adelaide Metro brand and consists of six lines. It is the only suburban network in Australia that still operates solely with diesel railcars, though it is planned to electrify most lines from 2013 onwards.[2] The current fleet consists of 70 diesel-electric 3000/3100 railcars and 29 2000/2100 diesel hydraulic railcars.[3]

There are six rail lines, all terminating at Adelaide Railway Station in the CBD. They are: 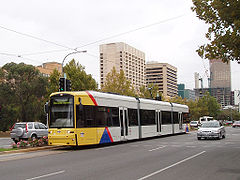 Adelaide's once extensive tram network was dismantled in the middle of the 20th century leaving only the Glenelg Tram running 12 kilometres between Victoria Square in the city-centre and Moseley Square on the beachfront at Glenelg. The majority of the line is on a dedicated corridor though the western suburbs, but travels on roadway in the city from the terminus to South Terrace and along Jetty Road in Glenelg.

An extension of the line from Victoria Square down King William Street and along North Terrace to a terminus near Morphett Street bridge opened to the public on 14 October 2007. The extended line now has stops adjacent to key city points, including Rundle Mall, the Adelaide Railway Station and the City West campus of the University of South Australia. Plans to build new lines from the City to AAMI Stadium at West Lakes, Port Adelaide and Semaphore have been proposed. A plan to create a city loop by extending the line through either Morphett or Gray streets, Currie Street, and Grote Street to rejoin the line in Victoria Square has also been proposed. As of November 2009 there is a great amount of work occurring with Light-Rail in Adelaide; the 2.8 km extension of track from the existing City West stop to the Adelaide Entertainment Centre, the south road tram bridge will be in operation by December 2009, a complete replacement of the line's overhead wiring is already underway, and 6 new trams (imported from Spain) have already started to arrive and will be in operation by 2010.

The line is operated by TransAdelaide from Glengowrie depot, using 11 Flexity Classic trams on weekdays, by 2010 the extended line will use 16 trams and 5 heritage H-Class trams on weekends, public holidays and special occasions. It is inevitable[citation needed] that the heritage H-class trams will be withdrawn from the city's light-rail network in the near future. 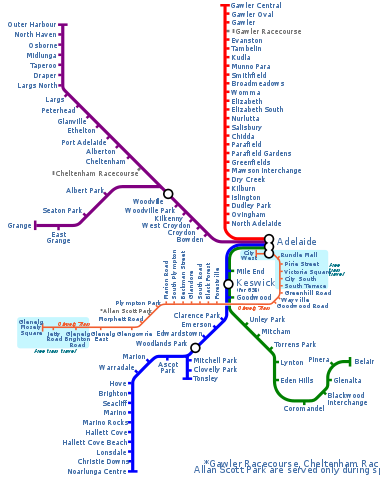 A map of Adelaide’s railway and tram network

Located in the southern suburbs at the Aberfoyle Hub Shopping Centre.

Located in the north western suburbs at the Centro Arndale Shopping Centre.

Located in the south eastern suburbs in the Adelaide Hills and provides train transfers from the Belair line with bus connections to the Stirling, Crafers and Aldgate.

Located at the bottom of Semaphore road and provides bus and train transfers from the Outer Harbour line to West Lakes, Port Adelaide, and Osborne

Located in Adelaide's northern suburbs and interconnects train services on the Gawler Central line with bus services to areas around metropolitan Adelaide including Salisbury North, Salisbury, Munno Para, and Smithfield.

Located in Adelaide's northern suburbs and interconnects train services on the Gawler Central line with bus services to areas around metropolitan Adelaide including Munno Para, Craigmore and Andrew's Farm.

Located in the north-eastern suburbs at the Westfield Tea Tree Plaza and the Tea Tree Plus Shopping Centres. It is the terminus of the O-Bahn Busway.

Located in the north-eastern suburbs with bus connections to Para Hills, Athelstone, Newton and Campbelltown. Intermediate station on the O-Bahn Busway.

Located in the inner north-eastern suburbs with bus connections to Oakden and the Circle Line. Intermediate station on the O-Bahn Busway.

Located in Adelaide's northern suburbs and interconnects train services on the Gawler Central line and bus services to areas around metropolitan Adelaide including Adelaide, Mawson Lakes Central and Salisbury. 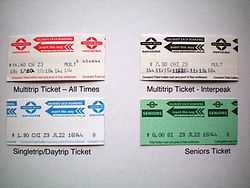 Front side of all the Metrotickets currently available. The black marks represent how long the ticket is valid for, its price, whether it is a concession ticket, how many times you have traveled on the ticket and the time at which you traveled.

The Adelaide Metro ticketing system is multi-modal, meaning that one ticket can be used to transfer between trains, trams and buses, regardless of the service provider. The system brand is Metroticket. It is an automated system which uses magnetic stripe tickets to encode conditions of ticket validity. The system was developed by Crouzet-SA (France). It was introduced on 27 September 1987. In 2010 a contract to introduce a smartcard ticketing system in 2013 was awarded to Affiliated Computer Services using technology used in, among others, Montreal, Houston and Toulouse.[4] 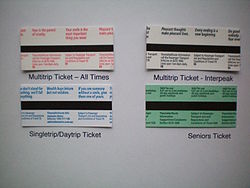 Back side of all the Metrotickets currently available. All tickets have the black magnetic strip and every ticket except for the Seniors Ticket, have a quote or saying printed on the back.

Passengers are required to insert their ticket into a validating machine upon each boarding, including when transferring to another vehicle. The machine reads the ticket to check that it is valid and then magnetically encodes and prints the initial validation time and ticket type details onto the ticket. This information is only printed on the ticket the first time it is validated.

Metrotickets are available in three fare types: Regular fare, Concession fare, and Student fare. The latter two are discount fares that are only available to those who present a valid entitlement card.

Metrotickets are then further broken down by journey type:

Singletrip and Multitrip tickets are available as all-times and interpeak tickets. 'All-times' allows travel at any time. 'Interpeak' allows travel between 9.01 am and 3.00pm on weekdays (excluding public holidays), for a lower price than an 'all-times' ticket.

Daytrip tickets allow free travel for two children aged under 15 on weekends, public holidays and during school holidays when accompanied by a parent or guardian.

Through the South Australian 2008 budget and as part of the Federal Government's nation building investment, over A$2 billion is being invested into transport over the next decade to revitalise the public transport network.[5] Which includes: