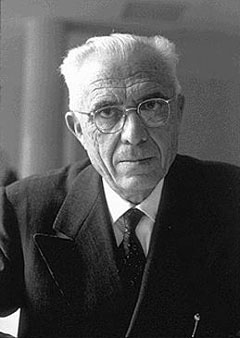 Pier Luigi Nervi (, - , ) was an Italian and . He studied at the and qualified in 1913. Dr. Nervi taught as a professor of engineering at Rome University from 1946-61. He is renowned for his brilliance as a and his novel use of reinforced concrete.

Pier Luigi Nervi was born in and attended the Civil Engineering School of , from which he graduated in 1913. After graduation, Nervi joined the Society for Concrete Construction. Nervi spent several years in the Italian army during from 1915-1918, when he served in the Corps of Engineering. His formal education was quite similar to that experienced by today's civil engineering student in Italy.

Nervi began practicing civil engineering after 1923, and built several airplane hangars amongst his contracts. During 1940s he developed ideas for a which helped in the rebuilding of many buildings and factories throughout Western Europe, and even designed/created a boat hull that was made of reinforced concrete as a promotion for the Italian government.

Nervi also stressed that intuition should be used as much as mathematics in design, especially with thin shelled structures. He borrowed from both Roman and to create aesthetically pleasing structures, yet applied structural aspects such as ribbing and vaulting often based on nature. This was to improve the structural strength and eliminate the need for columns. He succeeded in turning into an art by taking simple geometry and using sophisticated to find direct design solutions in his buildings.

Pier Luigi Nervi was educated and practised as a "ingegnere edile" (translated as "building engineer") - in Italy, at the time (and to a lesser degree also today), a building engineer might also be considered an architect. After 1932, his aesthetically pleasing designs were used for major projects. This was due to the booming number of construction projects at the time which used concrete and steel in Europe and the architecture aspect took a step back to the potential of engineering. Nervi successfully made reinforced concrete the main structural material of the day.

Most of his built structures are in his native , but he also worked on projects abroad. Nervi's first project in the United States was the . He designed the roof which consists of triangle pieces which were cast in place. This building is still used today by over 700 buses and their passengers.

Pier Luigi Nervi was awarded Gold Medals by the , the AIA, and the .