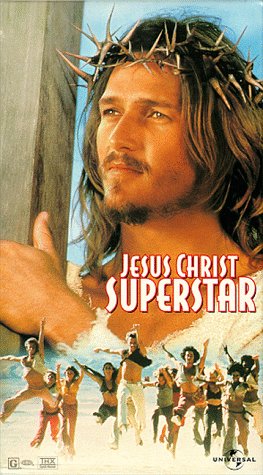 "Jesus Christ Superstar" is a 1973, Oscar-nominated film adaptation of the of the same name, based on the last weeks of the life of . The film was directed by . and Carl Anderson were nominated for two 1974 for their portrayals of Jesus and Judas, respectively.

Though it attracted negative criticism from some religious groups, the film was generally well received.

During the filming of "Fiddler on the Roof", (who played Pilate on the concept album) suggested to Norman Jewison that he should direct "Jesus Christ Superstar" as a film. After hearing the album, Jewison agreed to do it. The film was shot in (primarily at the ruins of ) and other Middle Eastern locations in 1972. The cast consisted mostly of actors from the Broadway show, with and Carl Anderson starring as Jesus and Judas. Neeley had played a reporter, and a leper in the Broadway version, and understudied the role of Jesus. Along with Dennen, (Mary Magdalene), and (Caiaphas) reprised their Broadway roles in the film. Originally, Jewison had wanted to reprise his role as Jesus, but Gillan turned down the offer, deciding that he would please fans more by touring with . Like the stage show, the film gave rise to controversy even with the changes to the script.

Some of the lyrics were changed for the film, partly enriching its content ("Hosanna", "The Temple") and partly making it more acceptable for a Christian audience. In a scene where a group of beggars overpowers Jesus, "Heal yourselves!", was changed to "Leave me alone!". In "Trial before Pilate", Jesus said "There may be a kingdom for me somewhere else, if you only knew", while the original line had been "if I only knew". And in "Judas' Death," the line "What you have done will be the saving of Israel" was changed to "... the saving of everyone."

Another important change was the insertion of a totally new song ("Then We Are Decided") in which the troubles and fears of Annas and Caiaphas regarding Jesus are better developed. These latter changes weren't espoused by later productions and recordings.

The film begins with a group of actors arriving in a bus and preparing for the filming of "Jesus Christ Superstar" during the overture. In this scene only the actor portraying Christ is not seen leaving the bus. Jesus seems to appear in the midst of the dancing cast. This is echoed at the end when he is not seen entering the bus to depart. The show gets underway, and we see Judas sitting on a hill watching Jesus surrounded by followers. Judas is worried about Jesus' popularity — he is being hailed as a God, but Judas feels he is just a man, and fears the consequences of their growing movement ("Heaven On Their Minds").

The other disciples badger Jesus for information about his plans for the future, but Jesus will not give them any. Mary Magdalene tries to calm Jesus by dabbing cool water on his face. Jesus finds this very soothing ("What's The Buzz?"). Judas' arrival and subsequent declaration that Jesus that should not associate with Mary dampens the mood. Angrily Jesus tells Judas that he should leave Mary alone, because his slate is not clean. He then accuses all the apostles of not caring about him ("Strange Thing Mystifying").

In a new song added for the film, we are introduced to the High Priest, Caiaphas, and his religious second in command, Annas. Caiaphas is worried about Jesus' growing popularity as well — he fears that the people will crown him King, which will upset the Romans. At first, Annas tries to calm him, but he finally sees Caiaphas' point, and suggests that he convene the council and explain his fears to them. Caiaphas agrees ("Then We Are Decided").

Mary Magdalene rubs ointment on Jesus' face to calm him. The relaxing mood is again shattered by Judas, who says that the money spent on ointment should have been given to the poor. Jesus rebukes him again, telling him that the poor will be there always, but Jesus will not ("Everything's Alright").

The council of the Priests meet, and they all discuss their fears about Jesus. Caiaphas tells them that there is only one solution: like John the Baptist, Jesus must be executed for the sake of the nation ("This Jesus Must Die").

Jesus and his followers joyfully arrive in Jerusalem, but Caiaphas orders Jesus to disband the crowd for fear of a riot. Jesus refuses and speaks to the crowd ("Hosanna"). Later, the apostle Simon Zealotes, and a crowd of followers, voice their admiration for Jesus ("Simon Zealotes"). Jesus appreciates this, but becomes worried when Simon suggests directing the crowd towards an uprising against their Roman occupiers. Jesus sadly dismisses this suggestion, saying that they do not understand his true purpose ("Poor Jerusalem").

We are now introduced to Pilate, the Roman governor of Judea. He reveals that he has dreamed about a Galilean man (Jesus) and that he will be blamed for this man's death ("Pilate's Dream"). The 27:19 states that it was actually Pilate's wife who had this dream.

Jesus and his followers arrive at the temple, which has been taken over by money changers and prostitutes. Modern goods like machine guns, mirrors, and drug paraphernalia are seen being sold. A furious Jesus destroys the stalls and forces them to leave. A disconsolate Jesus goes for a walk, but is confronted by a crowd of lepers, all wanting to be healed. Jesus tries to heal as many of them as possible, but eventually gives up and screams at them to leave him alone ("The Temple"). Mary comforts Jesus and Jesus goes to sleep. Mary loves Jesus, but is worried because he is so unlike any other man she has met ("I Don't Know How To Love Him").

Judas goes to the Priests and expresses his concerns, but he is worried about the consequences of betraying Jesus ("Damned For All Time"). The Priests take advantage of his doubts, and offer him money if he will lead them to Jesus. Judas initially refuses, but Caiaphas wins him over, by reminding him that he could use the money to help the poor ("Blood Money"). Again the filmmakers use modern inventions for effect; Judas is chased first by tanks, and after he meets with the Priests, two jets fly low over Judas' head.

At the , Jesus reveals that he knows Peter will deny him and Judas will betray him. A bitter argument between Jesus and Judas ensues. Judas leaves, but not before foreshadowing the opening lines of the title song, Superstar ("The Last Supper"). As the apostles fall asleep, Jesus goes to to pray about his imminent death ("Gethsemane (I Only Want To Say)").

Jesus waits for Judas, who arrives and betrays him with a kiss, accompanied by guards. The disciples offer to fight the guards, but Jesus will not allow it. Jesus is taken to the High Priest's House, found guilty of blasphemy, and sent to Pilate ("The Arrest").

Peter, meanwhile, denies Jesus three times, after being set on by a crowd of Jesus' enemies, ("Peter's Denial"). Jesus is taken to Pilate's house, where the governor, apparently unaware that Jesus is the man from his dream, mocks him. Since he does not deal with Jews Pilate sends him to Herod ("Pilate and Christ").

The flamboyant King Herod is excited to finally meet Jesus, for he has heard all the hype. He tries to persuade Jesus to perform various miracles for him. Herod and his companions are dressed in flamboyant modern clothing, with painted faces, gold teeth, and neon-colored wigs. When Jesus refuses to answer, Herod hurls abuse at Jesus, and orders the guards to remove him.("King Herod's Song").

The apostles and Mary Magdalene remember how things began, and wish they hadn't gotten so out of hand. ("Could We Start Again Please?"). Jesus is flung into a cell, where he is seen by Judas, who runs to tell the priests that he regrets his part in the arrest. He hurls his money to the ground, runs off and hangs himself ("Judas' Death").

Jesus is taken back to Pilate, who questions him as a smirking Herod looks on. Pilate realizes that, although he thinks Jesus is mad, he has committed no crime. The crowd yell for Jesus to be crucified. Pilate attempts to sway them by having Jesus flogged. Pilate's bemused indifference turns to a frenzy of confusion and anger, both at the crowd's irrational bloodthirstiness and Jesus' inexplicable resignation. Pilate realizes he has no option but to kill Jesus, or he will lose his job — and Jesus seems to want to die anyway ("Trial Before Pilate and 39 Lashes").

After Pilate washes his hands of Jesus' fate, the heavens open, and a white-jumpsuit clad Judas descends on a silver cross. This leads to the title song where Judas laments that if Jesus had returned as the Messiah today, he would've been more popular and his message easier to spread. Judas, accompanied by singing angels in white, disco-inspired clothing and wigs, also wonders what Jesus thinks of other religions' gods (Buddha and Mohammad are mentioned). He ultimately wants to know if Jesus thinks he is who they say he is ("Superstar").

Judas' questions go unanswered, and Jesus is sent to die ("The Crucifixion"), with ominous, atonal music, with Jesus saying some of his final words, such as "Father, forgive them, they don't know what they're doing", "My God, My God, why have you forgotten me?", and finally "Father, into your hands, I commend my spirit" before dying.

Under the final score ("John Nineteen:Forty-One"), the crew is seen striking the sets, as the cast reboards the bus from the beginning of the film. The actor who portrayed Jesus is noticeably absent, but the actor portraying Judas begins to board the bus, stops, looks back over the horizon, then sadly enters the bus. The bus and crew drive off; in the last scene of the sunset a silhouette of a shepherd can be seen walking across the screen. The shadow seen walking across the bottom was an Israeli shepherd leading his flock who just happened to walk through the shot while the camera was filming. Jewison includes this shot because he thought it was a very eerie yet perfect addition to the film.

Another film version was made for television in 2000, starring as Jesus and as Judas. It was shot entirely on indoor sets.

In a 2008 interview with "Variety" magazine, film producer Marc Platt stated that he was in discussions with several filmmakers for a remake of "Jesus Christ Superstar."

The film as well as the Broadway show were criticized by religious groups. Tim Rice said Jesus was seen through Judas`s eyes as a mere human being. Some Christians found this remark, as well as the musical's not showing the resurrection, to be irreligious, if not blasphemous. Some found Judas too sympathetic (in the movie it states that he wants to give to the poor, which although Bibical leaves out his ulterior motives). Also, in the film Judas is played by an African-American actor rather than a Jew or Caucasian. Biblical purists pointed out a small number of deviations from biblical text as additional concerns; for example, Pilate's wife having the dream instead of Pilate himself.