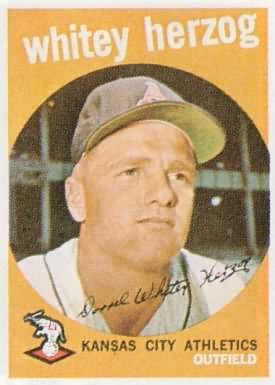 Dorrel Norman Elvert "Whitey" Herzog (born ) is a former , scout, coach, manager, general manager and director. He was born in .

A left-handed batter and thrower, Herzog originally signed with the . While he never appeared in a major league game for them, Herzog was profoundly influenced by their legendary manager, , during several sessions with the Yanks. After being traded by New York as a prospect, he played for the Washington Senators (by|1956-1958), Kansas City Athletics (by|1958-by|1960), (by|1961-by|1962) and (by|1963). In eight seasons, Herzog batted .254 with 25 s, 172 , 213 runs scored, 60 doubles, 20 triples, and 13 s in 634 games. In reference to his success as a player versus his success as a manager, Herzog once said, "Baseball has been good to me since I quit trying to play it." (Herzog has made this statement several times, most recently in an interview with Midwest which has aired several times in August and September 2007 during St. Louis Cardinals rain delays).Fact|date=June 2008

Herzog began his off-field baseball career as a scout for the Athletics in by|1964, then spent single seasons as a coach for the A's (by|1965) and the (by|1966). Herzog then moved into the Mets front office for six seasons as the team's director of player development.

Herzog's style of play, based on the strategy of attrition, was nicknamed "" and concentrated on pitching, speed, and defense to win games rather than on home runs. Herzog's lineups generally consisted of one or more base-stealing threats at the top of the lineup, with a power threat such as George Brett or Jack Clark hitting third or fourth, protected by one or two hitters with lesser power, followed by more base stealers. This tactic kept s low, while allowing Herzog to win a lot of games in stadiums with deep fences and , both of which were characteristics of Royals Stadium (now ) and Busch Stadium during his managerial career.

A less noticed (at the time) aspect of Herzog's offensive philosophy was his preference for patient hitters with high s: such players included Royals Brett, , and , and Cardinals Clark, , , and , as well as , who played for Herzog in both Kansas City and St. Louis. However, in St. Louis Herzog also employed free-swinging hitters who were less patient but fast runners, such as and .

With his extensive background in player development, Herzog also was a general manager with both the Cardinals (by|1980-by|1982) and the California Angels. He succeeded as manager of the Redbirds in 1980, managed for 73 games, then moved into the club's front office as GM on , turning the team over to . During the offseason, Herzog reclaimed the manager job, then held both the GM and field manager posts with St. Louis for almost two full seasons, during which he acquired or promoted many players who would star on the Cards' three World Series teams of the 1980s.

Herzog also expressed an interest in becoming President of the when that job opened in 1986. The role eventually went to President , who also became the Commissioner of baseball in 1989. In an interview, after Giamatti accepted the job of NL President, jokingly asked Herzog if he would be interested in the job opening for President of Yale University. Herzog replied, "That's not funny, Marv."

After leaving the Cardinals in by|1990, Herzog then held various front office and consulting posts with the Angels, including a brief stint (by|1993-by|1994) as general manager. He was a leading candidate to become manager of the following the 1996 season, however the Red Sox hired instead.