The Journeyman Project is a series of award-winning first-person science fiction adventure games, created by Presto Studios and released by various publishers, including Bandai, Sanctuary Woods, and Red Orb Entertainment.

The central story is set centuries in the future, where after horrific nuclear wars humanity united to create a peaceful global society. Due to the establishment of a utopian society, humanity has been invited to join an alien organization known as the Symbiotry of Peaceful Beings.

In the twenty-fourth century, time travel is realized by the Journeyman Project, the secret program to construct Pegasus, the world's first time machine. After a brief test period proves time travel is possible, the Journeyman Project is deactivated and the Pegasus device is put under the secret watch of the Temporal Security Agency or TSA for short (also the acronym of its base of operations, the Temporal Security Annex). The TSA exists to prevent temporal rips in the space/time continuum, by which changes in the past can alter the present. The player controls a character named Gage Blackwood, Agent 5 of the Temporal Security Agency. The games revolve around Agent 5's exploits throughout time to save Earth in the present. 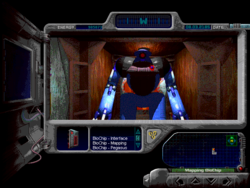 One of Dr. Sinclair's robots at the Morimoto Mars Colony in The Journeyman Project

In 1992, The Journeyman Project was one of the first PC games to use high quality rendered graphics. However, it suffered from performance problems and slow animations due to its early reliance on Macromedia Director. These problems were mostly overcome with the version 2.0 release that was retitled The Journeyman Project Turbo! and published by Sanctuary Woods in 1994.

The story begins with an alien ambassador arriving to finalize Earth's admission into the Symbiotry of Peaceful Beings. However, when Agent 5 is on duty a temporal rip is detected, and Earth's history is changed. The result of the new timestream is that humanity is passed over for admission into the alien organization.

This complete remake of the original Journeyman Project was published by Bandai in 1997 with some of the actors from The Journeyman Project 2: Buried in Time. Originally announced as a "Director's Cut", Pegasus Prime featured enhanced graphics, sounds, movies, and puzzles. It was released solely for the Power Macintosh by Bandai Digital Entertainment in North America, although it was also developed for the Apple Pippin and PlayStation in Japan. 3DO and Sega Saturn versions were also mentioned in the original product announcement, but are presumed to have been canceled.

The Journeyman Project 2: Buried in Time

Published in 1995 by Sanctuary Woods, Buried in Time was a complete shift in direction for the series, moving away from futuristic environments and instead preferring to go to real-life historical locations. The game also featured a completely redesigned interface and contained many more live-action scenes than the first game.

The Journeyman Project 3: Legacy of Time

Published in 1998 by Red Orb Entertainment, the final installment uses a unique 360 degree interaction system without resorting to 3D effects. It featured impressive production values with the actors and costumes. One of the first games to be developed for the DVD-ROM medium, the enhanced DVD edition featured twice the resolution of the CD-ROM version.

In 1999, Red Orb Entertainment collected the Windows versions of The Journeyman Project Turbo!, Buried in Time, and Legacy of Time into a 8-disc trilogy box set.

With the closure of Presto Studios in November 2002, it is unlikely that more Journeyman Project games will be produced in the near future. However, a fourth game story has been written.[1] It was originally projected for an October 2000 release and featured Gage and Arthur returning home when they discover a person from their past has re-emerged to endanger their future once again. One environment had even been modeled and rendered[citation needed], but the project was eventually put on hold to concentrate on Myst III: Exile.

In 2011, a group of fans lead by Andrew Curry started a remake of The Journeyman Project entitled The Journeyman Project Tribute. They still in Concept/pre-production phase. In the website provided below you can see some time travel effects, some alpha Sequence Animatic movies. The game uses blender render engine from The Blender Foundation.