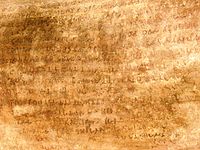 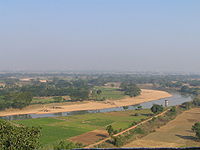 View of the banks of the Daya river from atop Dhauli hills, the presumed venue of the Kalinga war. 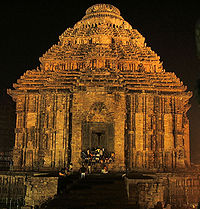 Konark Sun Temple built by the Eastern Ganga dynasty is one of the most well renowned temple in India and is a World Heritage Site.

The history of Orissa spans over 3,500 years and it is atypical from the history of the northern plains in many ways.[citation needed] Many of the common generalizations that are made about Indian history doesn't apply to the Oriya region. The word Oriya is an anglicised version of Odiya which itself is a modern name for the Odra or Udra tribes that inhabited the central belt of modern Orissa.[citation needed] Orissa has been the home of the Kalinga, Utkal, Kantara/Mahakantara and Kosal (South) that played a particularly prominent role in the region's history and one of the earliest references to the ancient Kalingas appears in the writings of Vedic chroniclers.[citation needed] In the 6th century, Vedic Sutrakara Baudhayana mentions Kalinga as being beyond the Vedic fold, indicating that Brahminical influences had not yet touched the land.[citation needed] Unlike some other parts of India, tribal customs and traditions played a significant role in shaping political structures and cultural practices right up to the 15th century when brahminical influences triumphed over competing traditions and caste differentiation began to inhibit social mobility and erode what had survived of the ancient republican tradition.[citation needed]

Present Orissa can be classified into part of three different kingdoms in ancient time. Kalinga, Kantara or Mahakantara and South Kosala were the kingdoms during Mahabharata/Ramayana where Kalinga existed in the eastern part of present Orissa, South Kosala existed in the North Western part of present Orissa and Kantara (Mahakantara) existed in the South Western part of present Orissa. Cuttack-Bhubaneswar and Kalinga Nagar (North Andhra Pardesh) were the central places for Kalinga kingdom, whereas Sripur/Bilaspur was center for South Kosal and Asurgarh region in Kalahandi was center for Kantara/Mahakantara. As per Mahabharata, Kalinga fought war in the side of Kauraba and Sahadeb had vanished in Kantara, which was known as a kingdom consisting of dense forest during that period, large part of KBK in Orissa and Bastar of Chhattisgarh were known as Kantara. Kosal was divided as North and South Kosala where Kusha, younger son of lord Sri Rama, got the South Kosala consiting present days North Chhattisgarh and North West Orissa.

In ancient times, Orissa was known as Kalinga. It was a major seafaring nation that controlled and traded with most of the sea routes in the Bay of Bengal. For several centuries, a substantial part of South Asia & Southeast Asia was under its cultural influence. The temple at Angkor Wat is a fine example of Orissan-influenced Indian architecture. Some parts of Southern and South Eastern Asia such as Sri Lanka, Cambodia, Java, Sumatra, Bali, Vietnam and Thailand were colonized by people from Orissa. In Malaysia, Indians are still referred as Klings because of this. Many illustrious Sri Lankan kings such as Nisanka Malla and Parakarama Bahu claim Kalinga origin. The king who destroyed the Sinhalese Buddhist control of Northern Sri Lanka and established a Hindu Kingdom in Jaffna was known as Kalinga Magha. One theory holds that the name of the country "Siam" for Thailand is derived from Oriya/Sanskrit Shyamadesha. The Angkor Wat in Cambodia is Orissan, with local variations. Bali in Indonesia still retains its Orissan-influenced Hindu heritage.

Mahapadmananda of Nanda Dynasty who ascended the throne of Magadha in 362 BC conquered and instituted Kalinga to his extensive empire. Although Kalinga lost her independence, she became economically prosperous under the Nanda rule. Mahapadmananda undertook irrigation projects to eradicate famine condition in Kalinga. The pre-Mauryan black polished potteries and punch-marked coins having four symbols found in plenty from Asurgarh in Kalahandi district and Sonepur district indicate the flourishing economic condition during the time of the Nanda rule.

After Mahapadmananda his eight sons ruled one after the other and the last Nanda king was overthrown by Chandragupta Maurya who found the Maurya empire in Magadha. During the time of Chandragupta's rebellion against the last Nanda king, Kalinga declared herself independent and tried to build her strength as an overseas power.

A major turning point in world history took place around 261 BC when the Mauryan emperor Asoka, invaded Kalinga, which is famously known as Kalinga War. Ashoka's military campaign against Kalinga was one of the bloodiest in Mauryan history on account of the fearless and heroic resistance offered by the people of Kalinga to the mighty armies of the expanding Mauryan empire. Though Asoka succeeded in occupying Kalinga but he could not the bear the horrendous slaughter caused by the war and therefore took up the path of non-violence and become the follower of Buddhism. Later on, Asoka was instrumental in spreading Buddhist philosophy all over Asia.

Perhaps on the account of Kalinga's unexpected bravery, emperor Ashoka was compelled to issue two edicts specifically calling for a just and benign administration in Kalinga. Kalinga became one of the administrative provisions in the empire of Magadha with headquarters of a Kumara (Viceroy) located at Tosali. The second headquarters was at Samapa where a high executive officer called Rajavachanika was stationed. Tosali was also the headquarters of the highest judiciary authority of the province.

Asoka aimed at a benevolent administration with a well organized bureaucracy and vigorously worked for the consolidation of the Maurya rule in the newly conquered province. Buddhism spread over Kalinga under his patronage and became the State religion while the art of stonemasonry developed to a great extent. Edicts were engraved on the Dhauli and Jaugada (this is a fort made of Jau by the King of Utkal. Situated beside the Village Nuagaon in Ganjam District, Orissa is about 40 km away from Silk City Berhampur) rocks to inculcate his administration and religious principles to the people. Asoka died in 232 BC and the Maurya empire lasted up to 185 BC.

The Tel river civilization existed in the Kalahandi, Balangir and Koraput (KBK) region, and has recently been explored.[1] Archeological discoveries in the Tel Valley suggest a well civilized, urbanized, cultured people inhabited on this land mass around 2000 years ago[2] and Asurgarh, Kalahandi was its capital. Kalahandi along with Koraput and Bastar was part of Kantara referred in Ramayana and Mahabharata.[3] In 4th century BC, this region was known as Indravana from where precious gem-stones and diamond were collected for the imperial Maurya treasury.[4] During the period of Ashoka, the region of Kalahandi, Koraput and Bastar region was called Atavi Land.[5] This land was unconquered, according to the Ashokan record.[6] In the beginning of theChristian era it may have been known as Mahavana.[7] In the 4th century AD, Vyaghraraja ruled over Mahakantara, comprising Kalahandi, undivided Koraput and the Bastar region.[8] Asurgarh was capital of Mahakantara.[9]

In the early past of the 1st century BC, Kalinga became independent under the Chedi Chief Mahameghavana. The third ruler of this dynasty was Kharavela who flourished during the second half of the 1st century BC. The Hatigumpha inscription in Udayagiri near Bhubaneswar furnishes detailed accounts about the life and activities of Kharavela from his boyhood to his 13th reigning year.

The Hatigumpha inscription records the activities of Kharavela up to his thirteenth regnal year after which nothing is known about him. He was probably succeeded by his son Kudepasiri. The Mahameghavahana dynasty continued to rule over Kalinga and Mahishaka up to the 1st century AD.

Subsequently, the kingdom was ruled under various monarchs, such as Samudragupta and Sasanka. It also was a part of Harsha's empire. In 795 AD, the king Yayati united Kalinga, Kosala and Utkala into a single empire. He also rebuilt the famous Jagannath temple at Puri. King Narasimha Dev is reputed to have built the magnificent Sun Temple in Konark. Although now largely in ruins, the temple may have rivaled the Taj Mahal in splendour.

In the history of Orissa the year 1568 is regarded as a dividing line between the glorious epochs of the past and the gloomy periods which followed thereafter. Through centuries from ancient times, Orissa maintained her political vitality with several powerful ruling kings at different periods, and she developed a political distinction of her own within the wider syndromes of Indian civilization. In the fields of art, architecture, religion, philosophy and literature, ancient Orissa made notable achievements and left for the future rich legacies of undying character. Orissa’s political strength was so spectacular even so late as 15th century AD that during the rule of Kapilendradeva (1435–1466 AD) the Oriya armies threatened and attacked most powerful kingdom in the neighbouring regions as well as in the far south and established political supremacy over a vast territory outside the limits of geographical Orissa. Kapilendra ruled from Ganges in the north-east to Arcot in the south. His successors Purushottamdeva and Prataprudradeva, though not very powerful, retained their hold over an extensive territory, and during the rule of the latter from 1497 to 1541 AD his kingdom extended from the Hooghly and Midnapore districts of West Bengal to the Guntur district of Andhra Pradesh.

Political decline came soon thereafter all too suddenly. Internal turmoil, internecine wars and external invasions worked simultaneously to bring about the downfall of medieval Orissa. The Muslim ruler of Bengal, Suleiman Karrani with the help of his famous general Kalapahad succeeded in conquering the land in 1568 by defeating the last Orissa king Mukundadeva, ending thereby the independence of this powerful Hindu kingdom which had resisted Muslim invasions successfully for three centuries. Orissa was one of the last of the Indian territories to succumb to the Muslim invasion though most part of the sub-continent had come under the Muslim rule much earlier.

In 1803, the British under the British East India Company occupied Orissa after the Second Anglo-Maratha War. In 1823, Orissa was divided into the three districts of Cuttack, Balasore and Puri, and a number of native tributary states. Orissa was administed as part of the Bengal Presidency. Following famine and floods in 1866, large scale irrigation projects were undertaken in the last half of the 19th century. The coastal section was separated from Bengal and made into the Province of Bihar and Orissa in 1912, in response to local agitation for a separate state for Oriya-speaking peoples. In 1936, Bihar and Orissa separated into separate provinces.

Following Indian independence, the area of Orissa was almost doubled and the population was increased by a third by the addition of 24 former princely states. In 1950, Orissa became a constituent state in the Union of India.

In the Mahabharata, the Pandavas spent the one year as 'Agyantavasa' as servants of King Virata, ruler of Matsa.