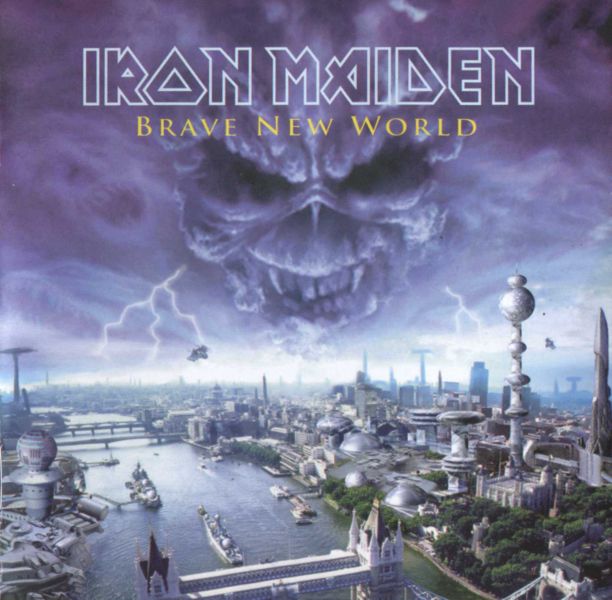 "Brave New World" is the twelfth studio by released on (see ). It marked the return of longtime lead singer and guitarist to the band who left the band in 1990, replaced by . It was also the band's first studio recording with three guitar players, as Gers stayed with the band after Smith's return.

The album art and title song are references to the novel of the same name written by . The upper half of the album art was done by , and is the last new artwork done by Riggs to be used on an Iron Maiden release.

"The Nomad", "Dream of Mirrors", and "The Mercenary" were originally written for , according to Adrian Smith in an interview. He said there was a fourth song, but he didn't know which one it was and that Steve Harris did not remember either. It is likely that this is either The Fallen Angel or The Thin Line Between Love And Hate, or an unreleased song from the sessions, as the remaining songs have all been confirmed to have been written for Brave New World. Apparently, former singer Blaze Bayley also co-wrote "Dream Of Mirrors", but wasn't credited. [ [http://www.roadrunnerrecords.com/blabbermouth.net/news.aspx?mode=Article&newsitemID=26808 Blabbermouth.net - Interview with Adrian Smith] ]

was the tour supporting the .

The song "Brave New World" was covered in 2008 by on the tribute CD "" released by "" magazine. [ [http://www2.kerrang.com/2008/06/maiden_heaven_track_listing_re.html Kerrang! Maiden Heaven Track Listing Revealed!] ]