The Tijuana River (Spanish: Río Tijuana) is an intermittent river, 120 mi (195 km) long, on the Pacific coast of northern Baja California in Mexico and southern California in the United States.

It drains an arid area along the U.S.–Mexico border, flowing through Mexico for most its course then crossing the border for its lower 5 mi (8 km) to empty into the ocean in an estuary on the southern edge of San Diego. Its lower reaches provide the last undeveloped coast wetlands in San Diego County amidst a highly urbanized environment at the southern city limits of Imperial Beach. The river has been the subject of great controversy in recent decades regarding pollution, flood control, and U.S. border protection. 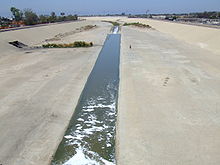 It rises in the Sierra de Juárez of northern Baja California, approximately 45 mi (70 km) ENE of Ensenada. It flows WNW through Tijuana, crossing the border approximately 5 mi (8 km) from the Pacific. It flows west, just skirting the international border south of the San Ysidro section of San Diego. It enters the Pacific 10 mi (15 km) south of downtown San Diego at the southern city limits of Imperial Beach. The lower 2 mi (3 km) of the river form a broad mud flat estuary that is prone to flooding in years of heavy rains. It is impounded in Mexico southeast of Tijuana by the Abelardo L. Rodríguez Dam for drinking water and irrigation. Former Baja California Governor Milton Castellanos Everardo constructed concrete barriers along the riverbank to prevent flooding during his tenure.[1]

The Tijuana River National Estuarine Research Reserve, established as part of the National Estuarine Research Reserve system in the United States and managed in part as a Biological Field Station by San Diego State University (SDSU)'s College of Sciences, protects part of the estuary of the river near the ocean in the United States.

The river has been used as a wastewater conduit for much of the last several decades. Partial progress was made in the 1980s with a Clean Water Grant from the U.S. Environmental Protection Agency to improve wastewater treatment to protect estuary waters, by creating the San Diego-Tijuana Wastewater Treatment Plant. Despite cross-border efforts to clean it up, raw sewage overflows in the surrounding canyons on the Mexico side of the border are a recurring problem along the river. According to a 1993 report [1] by the city of San Diego, the city of Tijuana had collected an average of 13 million gallons (50 million liters) per day of raw sewage that had crossed the Mexican border from Tijuana into California.

The mouth of the Tijuana River is the location of the legendary Tijuana Sloughs big-wave surfing break. Alan "Dempsey" Holder, a pioneering California big-wave surfer surfed waves over a mile from shore at the mouth of the Tijuana River starting in the 1930s. Through the 1950s he surfed the break with legends such as Peter Cole, Kimble Daun and Ron "Canoe" Drummond. A small underground group of big-wave surfers continue to surf the sloughs on 9-10' surfboards, but pollution and flooding has adversely impacted the waves. And big-wave surfing in the region has shifted to areas like Todos Santos Island and the Cortez Bank.