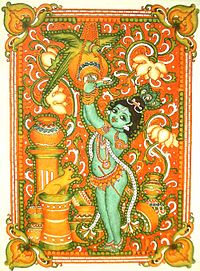 Kerala mural paintings are the frescos depicting mythology and legends, which are drawn on the walls of temples and churches in South India, principally in Kerala. Ancient temples, churches and palaces in Kerala, South India, display an abounding tradition of mural paintings mostly dating back between the 9th to 12th centuries CE when this form of art enjoyed Royal patronage.

The masterpieces of Kerala mural art include: the Shiva Temple in Ettumanoor, the Ramayana murals of Mattancherry Palace and Vadakkumnatha kshetram. The "Gajendra Moksham" mural painting in the Krishnapuram Palace near Kayamkulam and the mural paintings in the sanctom of Padmanabha temple at Thiruvananthapuram are very famous.

St. George Syrian Orthodox Church of the nasranis, depicting Biblical narrations. The fresco paintings of Kerala is called as "Fresco-secco". Its features are the lime medium and technique in which the prepared walls are painted only after it gets completely dry. It is derived probably from the ancient art of Kalamezhuthu. It adheres to the principles of the 'Shilparatna', the principal text on Indian painting techniques. It specifies that white, yellow, red, black and terreverte or Syama are the pure colours to be used as pure colours or in combination to make murals.

The murals of Thirunadhikkara Cave Temple (now ceded to Tamil Nadu) and Tiruvanchikulam are considered the oldest relics of Kerala’s own style of murals. Fine mural paintings are depicted in temples at Trikodithanam, Ettumanur, Vaikom, Pundarikapuram, Udayanapuram, Triprangode, Guruvayoor, Kumaranalloor, Aymanam , the Vadakkunathan temple in Trichur and the Sri Padmanabhaswamy temple at Thiruvananthapuram. Other mural sites are in the churches at Edappally, Vechur, Cheppad and Mulanthuruthy, and at palaces such as the Krishnapuram Palace near Kayamkulam and the Padmanabhapuram Palace.

The traditional style mural art form, using natural pigments and vegetable colours, is being revived by a new genre of artists actively involved in researching and teaching mural art at the Sree Sankara Sanskrit College in Kalady and also at a mural art school associated with the Guruvayoor temple. 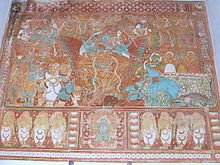