Ottawa Bluesfest
This article is about Bluesfest in Ottawa. For other blues festivals, see Bluesfest (disambiguation). 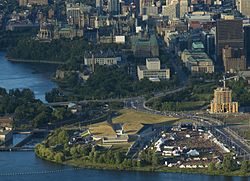 The Cisco Ottawa Bluesfest is an annual outdoor music festival that takes place each July in downtown Ottawa, Ontario, Canada. While ostensibly focused on blues, the festival has increasingly showcased mainstream pop and rock acts in recent years. The Bluesfest has become the largest blues festival in Canada, and the second largest in North America.[1]

Since its inception, the festival has been managed by executive and artistic director Mark Monahan and a small group of full-time employees, including director of sponsorship, Nathalie Laperrière and director of communications, AJ Sauve, adding current director of operations Mike Rouleau in 2004 and director of volunteer services Tammy Parent in 2006. In 2008, Sarah PC and William Yap joined the team as programming assistant and accounting coordinator, respectively.

In 2002, the Cisco Ottawa Bluesfest won the Best Event Award from the Ottawa Tourism and Convention Authority and in 2003 the organization received the Keeping the Blues Alive (KBA) award for arts education from the Memphis Blues Foundation. Mark Monahan is a past recipient of the Toronto Blues Society’s Blues with a Feeling award.

The festival was first held in 1994 at Majors Hill Park with the performance of Clarence Clemons, attracting 5,000 spectators.

The following year, the festival attracted larger crowds with entertainers like John Hiatt and Buddy Guy.

In 1996, 25,000 fans attended the Bluesfest to see Robert Cray, Los Lobos and others. It was then that the Mitel corporation became the first major sponsor of the event.

In 1997, the festival was moved to Confederation Park to provide more space for the increasing number of fans to see musicians such as Dr. John and Little Feat.

In 1998, over 80,000 people showed up for the festival, which coincided with Canada Day and featured Ray Charles. Bell Mobility and CIBC Wood Gundy joined the list of sponsors.

In 1999, the festival was moved to LeBreton Flats. Smokey Robinson, Little Richard, and Booker T. & the M.G.s played on the Main Stage and the "Blues in the Schools" program was launched. The Bluesfest became a registered charitable organization while attracting over 95,000 fans with performers such as Sting, Al Green, Taj Mahal, and Buddy Guy. The Royal Canadian Mint became a sponsor.

In 2002, Cisco Ottawa Bluesfest moved to Festival Plaza in downtown Ottawa and 200,000 fans showed up to see the Tragically Hip, Melissa Etheridge, The Fabulous Thunderbirds, and Colin James.

In 2003, the festival expanded to eight stages to celebrate its tenth anniversary. 220,300 people came to see the likes of Ben Harper, Sheryl Crow, Sum 41, The Allman Brothers Band, and Dan Aykroyd & James Belushi.

George Thorogood kicked off the 2004 festival, which included The Tragically Hip, Taj Mahal, The Mudboys, Bryan Adams, Blue Rodeo, and others.

2005 saw the festival further diversify its offerings, reaching out to a younger audience as well as those interested in more than just blues. Four on-site stages featured headliners such as War, ZZ Top, Kid Rock, Simple Plan, The Black Eyed Peas, K-os, Alexisonfire, India.Arie, as well as performances during the day and on the side stages by The Neville Brothers, Xavier Rudd, The Harlem Gospel Choir, Campbell Brothers, Percy Sledge, Neko Case, and one stage dedicated to acoustic and Cuban music. The eleven-day event brought over 220,000 people to Festival Plaza to enjoy and appreciate a wide variety of music from around the world. 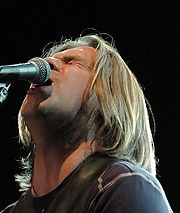 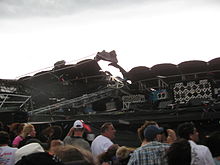 The toppled main stage in 2011

On July 17, just 20 minutes into Cheap Trick’s set, a violent thunderstorm blew through the festival area. A downburst[4] from an intense derecho that evening caused the stage upon which Cheap Trick had been playing to collapse. The band had interrupted their set and left the stage just before the downburst hit. No one from the band was injured.[5]