The Ottawa Civic Centre, also known as the J. Benson Cartage Centre for 2011–2012, is an indoor arena located in Ottawa, Ontario, seating 9,862. With temporary seating and standing room it can hold 10,585. Opened in December 1967, it is used primarily for sports, including curling, figure skating, ice hockey and lacrosse. The arena has hosted Canadian and world championships in figure skating and ice hockey, including the first women's world ice hockey championship in 1990. Canadian championships in curling have also been hosted at the arena. The arena is also used for concerts and conventions. It has also been used for Ottawa SuperEX events and exhibits.

The arena's name changes each Ottawa 67's season. The team holds a draw among local suppliers. The winner for 2011–12 was J. Benson Cartage. The entry fee was the price of two season tickets and a corporate suite for one night. The name is reflected in the centre-ice circle, the marquee on Bank Street, and in all 67's communications.[2] The arena was first renamed the Urbandale Centre in 2009 after Jeff Hunt, owner of the Ottawa 67's invited bids of $1,000 each to brand the then Civic Centre. Urbandale Construction had been a long-time sponsor of the 67's.[3] For 2010–2011, the 67's renamed the centre the Rona Centre.[4] The building, owned by the City of Ottawa, is officially known as the Civic Centre.[5]

In the 1960s, the City of Ottawa was preparing to rebuild the football stadium at Lansdowne Park, on Bank Street at the Rideau Canal. During the planning phase, the old Ottawa Auditorium arena was demolished and the City now needed two new sports venues. The City combined plans and the Civic Centre arena was built together under the north grandstand of the football stadium. The combination has meant that the arena is rather oddly shaped, one side of the arena is actually located beneath the upper part of the stadium grandstand, with the result that it has a much lower ceiling than the opposite side of the arena.

Dominion Bridge was the supplier of the huge steel girders for the arena and stadium's frame, some so large they had to be brought to the site by barge, up the Ottawa River and down the Rideau Canal. According to Dominion Bridge "the most striking feature of the unique design concept is a giant overhanging roof reaching out 170 degrees from atop eight massive steel A-frames."[6]

It opened on December 29, 1967, though seating was not complete, for an Ottawa 67's game versus the Montreal Junior Canadiens. Seats were taken temporarily from the Coliseum building nearby. The football stadium and arena complex was Ottawa's official "Centennial Project." Federal government grant money depended on the facility opening in 1967, and construction was rushed to meet the deadline.[6]

The arena was renovated and seating increased in 1992 in order to temporarily accommodate the Ottawa Senators of the NHL. Luxury boxes were hung from the ceiling over 3/4 of the bowl and all seats except for the club seats were narrowed slightly in order to increase capacity to over 10,000. The seats were replaced in 2005 and wider seats were installed, thus reducing capacity to under 10,000 again.

“After a disappointing Olympics in Sarajevo, Barbara and Paul seriously contemplated retiring from skating before World's. However, advised by their friend Brian Orser to put on her old skate boots, Barbara and Paul were propelled onto the ice, onto the podium and into history. Their flawless program is considered one of the great Canadian sporting moments and gave Canada a national thrill.”[8] 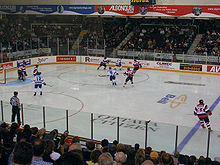 View of the much lower ceiling under the stadium grandstand.

The primary tenant since the building's opening has been the Ottawa 67s junior men's team. The arena's seating capacity is large by junior standards. The team played before large crowds in the 1960s and 1970s but attendance started to drop in the late 80s and bottomed out after the arrival of the Ottawa Senators in the early 1990s. In 1998 the team was bought by local businessman Jeff Hunt and he successfully improved attendance to take advantage of the large capacity of the Civic Centre. Since then, the 67's have been one of the top-10 junior teams in Canada in terms of attendance, often finishing #1 on the list.[9] The club has also been successful on the ice, winning the OHL Championship in 1977, 1984, and 2001 and the Memorial Cup championship in 1984 and 1999. The 1972 and 1999 tournaments were played at the Civic Centre, and the 1999 tournament was won by the host 67s.

In the 1970s, the arena was home to two WHA professional teams, the Ottawa Nationals and Ottawa Civics. Both did not survive in Ottawa for more than a season. The Nationals played for one regular season, but played their playoffs in Toronto and moved to Toronto to become the Toros. The Civics were a transplanted Denver Spurs team that played half a season in Ottawa before disbanding.

The arena hosted the first ever Canada Cup hockey game on September 2, 1976, when Canada crushed Finland 11-2. They also hosted games in the 1981 Canada Cup.

The arena was the site of the first IIHF Women's World Ice Hockey Championships in 1990. Canada defeated the United States 5–2 on March 25, 1990 to win the gold medal.

Starting in 1992, the revived Ottawa Senators NHL franchise used the arena for three and a half seasons. For the start of the 1992–93 season, the arena was refurbished for the Senators, adding seats and 32 private boxes.[10]

The arena was the home for the Ottawa Rebel of the National Lacrosse League for one and a half seasons.

The World Wrestling Federation has used the arena for its shows in Ottawa until Scotiabank Place was built. It still uses the arena from time to time for house shows. At a September 1991 Superstars of Wrestling taping, Ric Flair made his WWF television debut.

In April 1968, the arena hosted the Liberal Party of Canada leadership convention, when Pierre Trudeau was named Canadian Prime Minister.

Until the mid 2000's, the Central Canada Exhibition, aka 'Ottawa SuperEx' used the arena for concerts and exhibits.