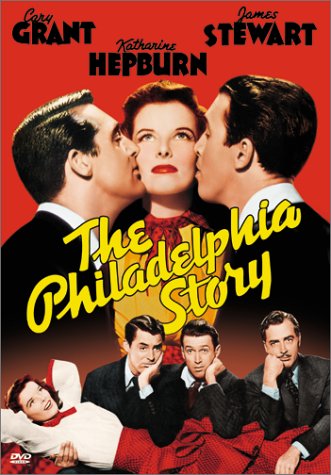 "The Philadelphia Story" is a fy|1940 romantic starring , , and James Stewart, and directed by . Based on a Broadway play of the same name by ,

The play was Hepburn's first great triumph after several movie flops which had led to her being labeled "box office poison", and she purchased the film rights to the play in order to control it as a vehicle for her movie comeback. The film was a great success.

"The Philadelphia Story" was nominated for six , and won two: Stewart for Best Actor and for Best Adapted Screenplay. It was adapted in 1956 as the musical "", starring , , and .

In 1995, "The Philadelphia Story" film was selected for preservation in the United States .

Tracy Samantha Lord Haven (Hepburn) is a wealthy Main Line socialite who had divorced C.K. Dexter Haven (Cary Grant) and is about to marry "" "Man of the People" George Kittredge (John Howard). The situation is complicated when she is blackmailed by publisher Sidney Kidd () into granting exclusive coverage of the wedding to tabloid reporter Macaulay "Mike" Connor (James Stewart) and photographer Liz Imbrie (). In exchange, "Spy" magazine agrees to refrain from exposing the antics of Tracy's philandering father, Seth (). As the wedding nears, Tracy finds herself torn between her fiancee, her ex-husband and the reporter. The challenging personalities of Mike and Dexter force the stolid Kittredge into the background.

The night before the wedding, Tracy gets drunk for only the second time in her life and takes an impromptu, innocent swim with Mike. When George sees Mike carrying an intoxicated Tracy into the house afterwards (both of them wearing only bathrobes), he thinks the worst, that his bride-to-be has disgraced herself. The next day, he tells her that he was shocked and feels entitled to an explanation before going ahead with the wedding. Tracy takes exception to his lack of faith in her and breaks off the engagement. Then she realizes that all the guests have arrived and are waiting for the ceremony to begin. Mike volunteers to marry her (much to Liz's distress), but Tracy graciously declines. At this point, Dexter makes his successful bid for her hand.

Broadway playwright Philip Barry [ibdb name|7990|Philip Barry] wrote "The Philadelphia Story" specifically for Katharine Hepburn, who ended up backing the play, and foregoing a salary in return for a percentage of the play's profits. Co-starring with Hepburn on Broadway were as "C.K. Dexter Haven", as "Macauley Connor", with as "Liz Imbrie".

Hoping to create a film vehicle for herself which would erase the label of "box office poison" that the Independent Theatre Owners of America had put on her after a number of commercial failures (including "", now considered a classic), Hepburn purchased the film rights to the play and convinced 's to buy them from her for a paltry $250,000 in return for Hepburn having veto over producer, director, screenwriter and cast. [All Movie [http://www.allmovie.com/cg/avg.dll?p=avg&sql=1:38000 Overview] ]

Hepburn initially wanted for the "Dexter Haven" role and as "Macauley Connor", but both had other commitments. Grant agreed to play the part on condition that he be given top billing and that his salary would be $137,000, which he donated to the British War Relief Fund. The pairing of Cukor and Clark Gable would have been problematic in any case, as they had not gotten along on their last pairing, "Gone with the Wind", and Cukor had subsequently been fired from the production and replaced with .

Stewart had been extremely nervous about the scene in which Conner recites poetry to Tracy and believed that he would perform badly. was visiting the set that day and was asked by director to say something to encourage him. Coward remarked to Stewart offhandedly, "Did I mention I think you're a fantastic actor?"Fact|date=June 2008 Stewart was also quite uncomfortable with some of the dialogue, especially in the swimming pool scene. He said at the time that if he had played the scene in just a swimming costume, it would have been the end of his career.Fact|date=June 2008

Hepburn performed the dive into the swimming pool entirely by herself without the help from doubles. Forty years later, during the filming of , was frightened to do her own dive, to which the annoyed Hepburn responded, "I did my own dive in The Philadelphia Story."

"The Phladelphia Story" premiered in in the week of fy|1940 and it was shown in other selected theatres in December, but MGM had agreed to hold the film's general release until January 1941 in order not to compete with the stage play, which was no longer playing on Broadway, but was touring the country. The film went into general American release on fy|1941. [TCM [http://www.tcm.com/tcmdb/title.jsp?stid=12778 Overview] ]

Stewart was not expecting to win and was not planning to attend the awards ceremony. He was called and "advised" to show up in a dinner jacket. Stewart himself said he had voted for for his performance in "The Grapes of Wrath", and always felt the award had been given to him as compensation for not winning the for his portrayal of Jeff Smith in "". Donald Ogden Stewart, on the other hand, declared upon winning "his" Oscar: "I have no one to thank but myself!"

In 1995, "The Philadelphia Story" film was deemed "culturally, historically, or aesthetically significant" by the and was selected for preservation in the United States .

The stars of the film appeared on "Lux Radio Theater"'s radio adaptation of Barry's play in 1942. "Lux" presented it again in 1943 with Robert Taylor, and Robert Young.