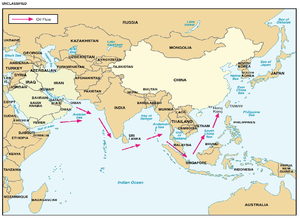 Malaccamax tankers can carry oil from the Persian Gulf to China.

Malaccamax is a naval architecture term for the largest size of ship capable of fitting through the 25 metres (82 ft)-deep Strait of Malacca. Because the Sunda Strait is even shallower at 20 metres (66 ft) minimum depth, a post-Malaccamax ship would need to use even longer alternate routes such as:[1]

or artificially excavated new routes such as:

Bulk carriers and supertankers have been built to this size, and the term is chosen for very large crude carriers (VLCC).[2] One recent design of container ship, approaching the Malaccamax size limit, is the Maersk Triple E class, with a capacity of 18,000 Twenty-foot equivalent units (TEU).[3] Growth in demand for container transport could be leading to the creation of new terminals dedicated to such large ships.[4]

Similar terms of Panamax, Suezmax and Seawaymax are used for the largest ships capable of fitting through the Panama Canal, the Suez Canal and Saint Lawrence Seaway, respectively. Aframax tankers are those with a deadweight tonnage of 80,000 to 120,000.