Clotilde
This article is about the saint. For other uses, see Clotilde (disambiguation). 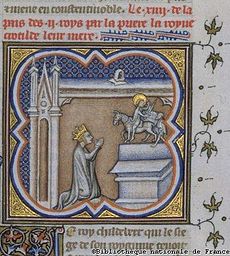 Saint Clotilde (475–545), also known as Clothilde, Clotilda, Clotild, Rotilde or Chroctechildis, was the second wife of the Frankish king Clovis I. Venerated as a saint by the Catholic Church, she was instrumental to her husband's famous conversion to Christianity and, in her later years, was known for her almsgiving and penitential works of mercy.

Clotilde was born at the Burgundian court of Lyon the daughter of King Chilperic II of Burgundy. Upon the death of Chilperic's father King Gondioc in 473, he and his brothers Gundobad and Godegisel had divided their heritage; Chilperic II apparently reigning at Lyon, Gundobald at Vienne and Godegesil at Geneva.

According to Gregory of Tours (538–594), Chilperic II was slain by his brother Gundobad in 493, and his wife drowned with a stone hung around her neck, while of his two daughters, Chrona took the veil and Clotilde was exiled. 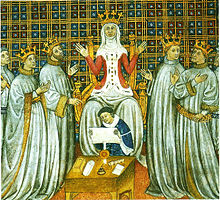 In 493 Clotilde married the Merovingian Clovis, King of the Franks, who had just conquered northern Gaul. The marriage produced the following children:

Clotilde was brought up in the Catholic faith and did not rest until her husband had abjured paganism and embraced the Catholic faith (according to Gregory of Tours' Historia Francorum [History of the Franks]) in the middle of battle with the Alemanni at Tolbiac in 496. He officially converted the same year, baptised by Bishop Remigius of Reims. With him she built at Paris the Church of the Holy Apostles, afterwards known as the Abbey of St Genevieve. After Clovis' death in 511, she retired to the Abbey of St. Martin at Tours.

In 523 Clotilde finally took revenge for the murder of her father, when she incited her sons against her cousin King Sigismund of Burgundy, the son of Gundobad, and provoked the Burgundian War, which led to Sigismund's deposition and imprisonment, and his assassination the following year. In turn, her eldest son Chlodomer was killed during the following Burgundian campaign under Sigismund's successor King Godomar at the Battle of Vézeronce. Clotilde tried in vain to protect the rights of her three grandsons, the children of Chlodomer, against the claims of her surviving sons Childebert and Chlothar. Chlothar had two of them killed, while only Clodoald (Cloud) managed to escape and later chose an ecclesiastical career. She was equally unsuccessful in her efforts to prevent the civil discords between her children.

Clotilde died in 544 or 545 at Tours; she was buried at her husband's side, in the Church of the Holy Apostles (Abbey of St Genevieve).