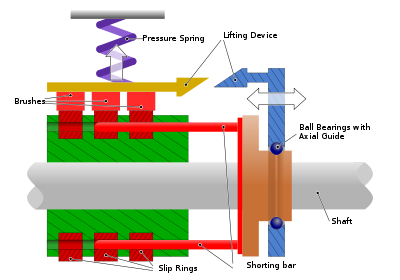 Sketch of an electric motor with slip rings

A slip ring (in electrical engineering terms) is a method of making an electrical connection through a rotating assembly. Slip rings, also called rotary electrical interfaces, rotating electrical connectors, collectors, swivels, or electrical rotary joints, are commonly found in electric motors, electrical generators for AC systems and alternators and in packaging machinery, cable reels, and wind turbines. They can be used on any rotating object to transfer power, control circuits, or analog or digital signals including data such as those found on aerodrome beacons, rotating tanks, power shovels, radio telescopes or heliostats. [1]

A slip ring is a rotary coupling used to transfer electric current from a stationary unit to a rotating unit. Either the brushes or the rings are stationary and the other component rotates. [2] [3]

This system is similar to the brushes and commutator, found in many types of DC motors. While commutators are segmented, slip rings are continuous, and the terms are not interchangeable. Rotary transformers are often used instead of slip rings in high speed or low friction environments.

Mercury-wetted slip rings, noted for their low resistance and stable connection use a different principle which replaces the sliding brush contact with a pool of liquid metal molecularly bonded to the contacts. During rotation the liquid metal maintains the electrical connection between the stationary and rotating contacts. However, the use of mercury poses safety concerns, as it is a toxic substance. If a slip ring application involves food manufacturing or processing, pharmaceutical equipment, or any other use where contamination could be a serious threat, the choice should be precious metal contacts. Leakage of the mercury and the resultant contamination could be extremely serious.[4]

A pancake slip ring [5] has the conductors arranged on a flat disk as concentric rings centered on the rotating shaft. This configuration has greater weight and volume for the same circuits, greater capacitance and crosstalk, greater brush wear and more readily collects wear debris on its vertical axis. However, a pancake offers reduced axial length for the number of circuits, and so may be appropriate in some applications.

Slip rings are made in various sizes; one device made for theatrical stage lighting had 100 conductors. [6] The slip ring allow for unlimited rotations of the connected object, whereas a slack cable can only be twisted a very few times before it will fail.