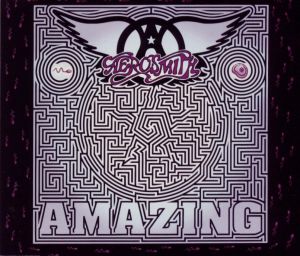 In the song, sings about hard times in his life ("I thought I could leave, but couldn't get out the door", "I was wishin' that I would die", "Scratchin' to stay alive") and how he came to grasp reality and escape his hard times ("It's amazing...with the blink of an eye you finally see the light...when the moment arrives that you know you'll be alright") and how he's "sayin' a prayer for the desperate hearts tonight".

The lyrics primarily concern the band's well-documented struggles with drug and alcohol addiction and their subsequent recovery, the musical renaissance of their career in the nineties being a last chance at what they should have always been - "Got one last shot at permanent vacation, and how high can you fly with broken wings? Life's a journey, not a destination, and you just can't tell just what tomorrow brings. You have to learn to crawl, before you learn to walk, but I just couldn't listen to all that righteous talk, oh yeah - I was out on the streets, tryin' to survive, scratchin' to stay alive."

The song features a constant piano playing throughout the song, driving guitar riffs, and a guitar solo, featuring leads by both Joe Perry and and an emotional delivery of lyrics by including his characteristic scream towards the end of the song. There is also a special guest appearance by who sings background vocals.

The video for the song, directed by , is well-known for its depiction of digital technology and featured the second appearance of in the band's videos. Paired with her was , star of "Dazed and Confused", a film which was released in the same year as "Get a Grip" and which memorably made numerous references to Aerosmith. The characters are featured in the music video as two cyberspace kids who escape to a world of together, both not realizing the other is also doing virtual reality.

In the virtual dream world, the two embark on a motorcycle journey and sky-dive, as well as engage in a steamy makeout session.

One part of the video features the characters boarding and taking flight in a , which combined with the digital technology creates what is often regarded as a fascinating dichotomy between antiquated and modern technology, in some ways presenting a parallel for the characters.

Meanwhile, members of the band perform in various parts throughout the song, including in a tunnel, as well as solo shots of in a room by himself and Joe Perry playing a guitar solo with a cityscape in the background. Joe Perry also suffered a slight head injury during the making of the video.

At the end of the video, it is discovered that it was Silverstone who was engaging in the virtual fantasy.

The video version of the song was extended by 52 seconds at the end, where two loops were inserted.

"Amazing" appeared in Helena's ending movie in the video game "".