Municipal Stadium was originally built as Muehlebach Field in 1923 for the minor-league Blues for $400,000. It was named for Blues owner George E. Muehlebach, who also owned Muehlebach Beer and the Muehlebach Hotel.

When Arnold Johnson bought the Philadelphia Athletics from Connie Mack in November 1954, he announced that he would move the team to Kansas City. He had purchased Blues Stadium a year earlier, but sold it back to the city. Muehlebach built Blues Stadium in 1923 with footings sufficiently strong to support a second-deck. However, when renovation work on Blues Stadium began to add a second-deck, it was discovered that the footings were not strong enough. City officials elected to raze Blues Stadium and rebuild from scratch. The city ran three-shifts and the new stadium was built in 90-days, completed in time for the April 1955 opening. The new construction was financed by a bond issuance.[4] The Braves Field scoreboard was purchased and moved to Kansas City and temporary bleachers were added in the left field corner and parts of the outfield. 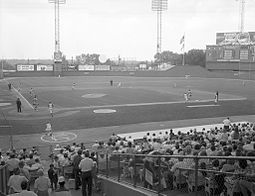 Athletics vs. Yankees at Municipal Stadium, 1966.

Municipal Stadium was home to many of the shenanigans of Charlie Finley, who bought the A's after Johnson's death in 1960. Most notably, he tried to shorten the rather distant fences by creating a 296-foot (90 m) Pennant Porch in right-field, fronting a tiny bleacher section, to mock the famed short fence in right field at Yankee Stadium, home of the powerful Yankees. The move was quickly vetoed by the league. So Finley rebuilt the fence to the bare legal minimum of 325 feet (99 m), and repainted the fence to say One-Half Pennant Porch. Later he tried the ruse of putting a canopy over the little bleacher, which just happened to have an extension that reached out 29 feet over the field. The league, not amused by Finley's sense of humor, again ordered him to cease and desist. According to legend, on a road trip that the A's made to New York, a Yankee hitter lofted a long fly ball to left field which, in the cavernous left field of Yankee Stadium, became a routine out. Yankees public address announcer Bob Sheppard is alleged to have then said over the microphone, "In Kansas City, that would have been a home run", itself a response to Finley's dictum for Municipal Stadium public address announcer Jack Layton to announce, "That would have been a home run at Yankee Stadium" for any ball hit beyond a line Finley painted in the outfield grass 296 feet away from home plate in Kansas City.

In addition to his notorious tinkering with the right field corner, Finley experimented with moving the other fences in and out several times during his seven seasons operating the team here. None of those moves had any notable effect on the team's performance, as the club finished in or near last place nearly every year.

A small zoo with goats and sheep and picnic area stood behind the right-field fence. When home runs were hit into the field the goats and sheep would scamper up the hill. At the same time, Finley replaced the Athletics' old elephant mascot with a live mule, appropriately named "Charlie-O".

At home plate a mechanical rabbit, nicknamed "Harvey" in reference to the stage play and film Harvey, rose out of the ground with new baseballs for the umpire and a compressed-air device (nicknamed "Little Blowhard") blew dirt off of home plate.

During the years when two major league All-Star Games were scheduled each year instead of one, Municipal Stadium hosted the first of the two 1960 games, with the NL winning the contest 5-3.

On September 17, 1964, The Beatles played Municipal Stadium as part of their first U.S. tour. The date was originally supposed to be an off-day for the band, but they agreed to perform when Finley offered their manager, Brian Epstein, a then-record sum of $150,000. The group opened the concert by saluting the host town with their medley of "Kansas City" and "Hey, Hey, Hey, Hey".

When the Dallas Texans of the AFL moved to Kansas City in 1962, becoming the Kansas City Chiefs, Municipal Stadium was readied for football. Temporary stands were erected in left field to expand the stadium's capacity each fall, but had to be removed during the baseball season. The double-decked grandstand extended all the way across the south sideline (first base line of the baseball field), but ended halfway around the west end zone (third base on the baseball diamond). Both teams' benches were on the north sideline in front of the temporary bleachers, as was the case at other baseball stadiums converted to football use such as Milwaukee County Stadium, Metropolitan Stadium, Tiger Stadium and Wrigley Field. The east end zone ended at the right field fence, and the large scoreboard was in this end of the stadium. Due to the fence, there was significantly less room between the end line and the fence of the east end zone than there was in the west end zone, where there was a significant amount of room between the end line and the grandstand.[5]

The Chiefs' final game at Municipal Stadium was played on Christmas Day 1971. The double-overtime playoff contest (a loss to the Miami Dolphins) remains the longest game in NFL history.[6] This classic was the only post-season football game ever played at Municipal Stadium. 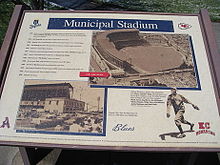 Today, a plaque at 22nd and Brooklyn marks the site of Municipal Stadium.

As Municipal Stadium aged, it became clear that new facilities would be needed, and public bonds were issued in 1967 to fund a complex including separate football and baseball stadiums. It came too late for the A's, however, as they moved to Oakland after the 1967 season. Instead, Kansas City was awarded a new American League team for 1969, and the Royals used Municipal Stadium as a temporary home.

After the 1972 baseball season, Municipal Stadium was replaced by Royals Stadium for the Kansas City Royals and the adjacent Arrowhead Stadium for the Kansas City Chiefs. Municipal Stadium was demolished in 1976, and replaced by a municipal garden. Currently, the former ballpark site is being redeveloped with new single family homes.